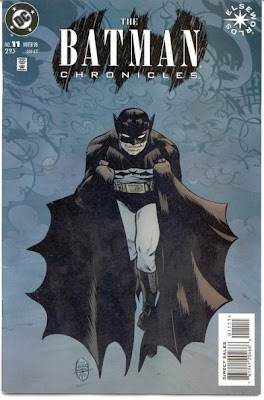 In 1995, DC began publishing quartlery-ish anthology series Batman Chronicles, because four ongoing monthlies (Batman, Detective, Shadow of The Bat and Legends of the Dark Knight) just weren’t cutting it n terms of giving fans all the Batman comics they needed.

Each issue generally contained three stories by various creators—some who were already working on the core Bat-books, some from pretty far afeild—often organized around some kind of theme. For example, #4 had short stories tying in to the “Contagion” crossover story, #7 was a team-up issue, #9 featured characters from that summer’s shitty Batman movie, and so on.

The winter of 1998’s Batman Chronicles #11 was an Elseworlds issue, featuring a story of Bruce Wayne as a 1940’s private eye, a Leatherwing (i.e. Pirate Batman) story, and Paul Pope’s first ever Batman work (And his first superhero work for either Marvel or DC)

It was entitled “Berlin Batman,” and it actually had a lot of thematic similarities to Batman: Year 100, which is probably why DC decided to include it in the back of their trade collection of Batman: Year 100.

The set-up is pretty much classic What If…? or Elseworlds change one detail and see what happens formula: What if Batman were a Jew, and instead of debuting in Gotham City, his career began in Berlin, in the year 1939, the same year Detective Comics #27 was published?

It opens with a bat-shaped caption box: “Berlin, 1939. In the home of wealthy socialite Baruch Wane, who at the moment is entertaining his friend, Kommisar Garten.”

Baruch is “a painter of the cubist school, inspired by the great Pablo Picasso.” He too rarely leaves his home, as far as Garten knows, and his pink house robe and long cigarette holder don’t exactly project the sort of man who might secretly be the scary “criminal Batman…seen lurking around the homes of prominent party members.”

After their expository conversation, Garten leaves for business, letting it slip that his men have confiscated the property of “a certain economist…a Jew from Vienna.”

After a few brief words with the cutest Robin ever, 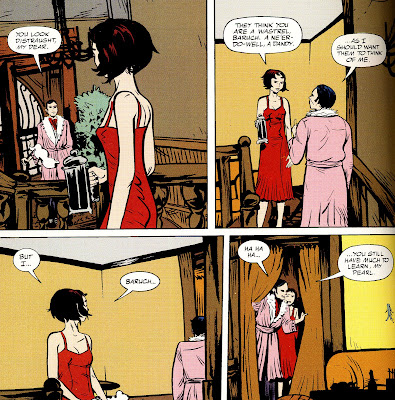 Barcuh suits up in his red-brown and gray Batman costume and heads for the train yards, remembering his origin as he does so.

Young Baruch's parents were beaten to death by a mob one night, for the sin of being Jewish, and at his grandparents’ house, the young Wane clutches his stuffed toy “Mister Batmouse” and swears to avenge them one day.

At the train yard, he battles against Garten and his men, and when it becomes clear he can’t stop a train, he opts to destroy the tracks with a bomb, the beginning of his campaign against the party.

The story is framed as the memoirs of Robin, written in 1989. It’s short—just 18 pages—but it imagines a very interesting take on Batman, suggesting a much larger story that will never be told, of the Batman’s campaign to defeat Nazi Germany from the inside out.

It’s really the best kind of Elseworlds story; the kind that suggests a bigger, more appealing narrative that you don’t really ever need to read, but enjoy imagining just the same. 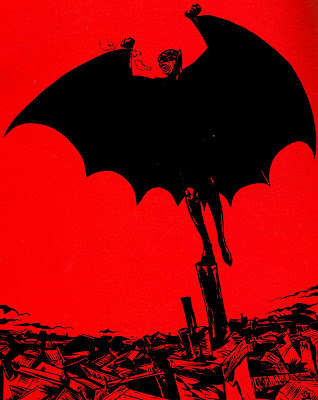 This was such a cool story and had tons of potential. The mind just goes into overdrive imagining Batman fighting Nazis (as well it should).

I'm glad DC had the good sense to actually not run with this one as an extended series.