Just in case you've ever wondered what it looks like when The Spectre has an orgasm: 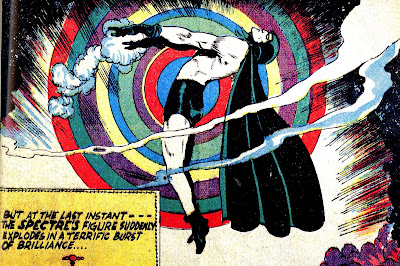 (A detail from a story written by Jerry Siegel and drawn by Bernard Baily that originally appeared in 1940's More Fun Comics #60, but I found it in The Golden Age of DC Comics: 365 Days, which I promise I'm almost done using as blog-post fuel. Just one more and then I'm done with it forever. I swear.)
Posted by Caleb at 6:41 PM

It's too bad Rainbow Raider was too young at this moment in history to be there with The Spectre.

Am I missing the subtext?