I find three things amusing about this image: 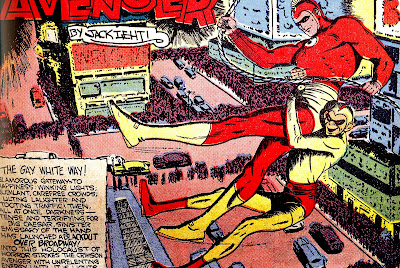 1.) You can't tell by this drawing, but that malformed goblin hanging off of The Crimson Avenger is actually Wing, a Chinese man who served as his sidekick. This comic was drawn in 1941, which was well before anyone in America had ever actually seen an Asian person in real life, and they all just assumed that all of Asia was populated by some kind of sub-human mole men.

2.) Rather than swinging on his own rope or clinging to Crimson Avenger's back or shoulders, Wing decides to nestle his face against the Avenger's ass and get a good grip on his dick. Surely that can't be a safe or comfrotable way for either of them to swing between rooftops.

3.) The narration box to the left says "The Gay White Way!" In a splash panel featuring a dude copping a feel off another dude.

(This panel was drawn by Jack Lehti and originally appeared in 1941's Leading Comics #1, but I scanned it out of 2004's The Golden Age of DC Comics: 365 Days by Les Daniels, Chipp Kidd and Geoff Spear, a book specifically designed to provide me with lazy content.)
Posted by Caleb at 6:25 PM

Labels: chip kidd, evidence that I am actually a grade-school child, les daniels, phoning it in

I've heard of subtext, but this is ridiculous!

And hilarious of course.

I think this might qualify as just straight up text.

And you ain't lazy. You're awesome!

That's Wing?! I thought it was a monkey in a costume.

"I know who I am. I'm the dude that's playing a dude pretending to be another dude hanging on to a dude's crotch!"

You'll only get that if you watched Tropic Thunder...but even then it won't be funny. :)