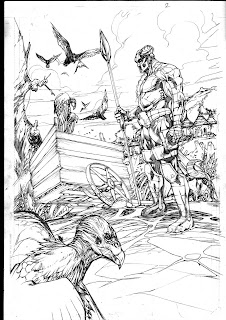 If you've read any (on schedule) DC comics this week, then you saw the above image on the DC Nation Page, complete with an image of a piece of paper super-imposed on it. That paper image is a memo to Dan DiDio from Ian Sattler reading, "He Dan, Here is the art from Magog #1. It's looking pretty amazing—when do you think we can announce this an ongoing and say who the creative team is?"

Today, apparently, as DC's Source blog, from which I appropriated the image above, announced the team and showed off another page in a second Magog post of the day. The creative team is going to be Keith Giffen, Howard Porter and John Dell.

I still have a question though: Why?

I'm not trying to be an a-hole or anything, but a Magog ongoing? Does anyone like Magog?

He was created by Alex Ross as a Cable analogue in Kingdom Come to be a living symbol of the shitty character design and free-floating moral code of the superheroes of the Image Comics age. Chuck Austen brought him into the DCU a few years ago as a Superman villain, and then Ross and Geoff Johns more recently brought another version of him into the DCU in their 3,000-part "Thy Kingdom Come" storyline in Justice Society of America. Their new version is a descendant of President Franklin Delano Roosevelt's, and was a U.S. soldier who was brought to life and given his funny looking costume by a god of the Third World.

I know every character has fans, so I'm sure someone, somewhere really, really likes Magog, but I've never encountered this fan. In fact, I've never heard anyone say anything remotely positive ever about any version of Magog anywhere.

Now, DC often makes perplexing publishing decisions, like publishing a Huntress: Year One miniseries by an un-tested creative team just a few years after a popular writer wrote Huntress' definitive origin, or starting their Final Crisis Aftermath series half a year after Final Crisis wrapped, or sitting on an announced Batwoman ongoing for years before finally just shuffling her into Detective Comics temporarily, or launching a Power Girl series for no reason, but this seems so completely random I can't even comprehend it.

I mean, Power Girl launched with a countdown-to-cancellation clock ticking, but its creators have their fans and the characters has some fans. But Magog? Maybe if Alex Ross were involved, and it was premised on a series about the road to Kingdom Come, of the sort that Ross and Mark Waid have talked about as an idea that was once tossed around, but even if that what Giffen and company end up doing, without Ross' involvement, would anyone care? (And that JSoA arc made clear that Kingdom Come was a place outside of the DCU, not a time in it's future).

Although, maybe this is set in the Kingdome Come-iverse, rather than the DCU? That seems like it would potentially be a better hook but, again, it doesn't involve Ross, so will anyone care?

If brand-name heroes, originals or legacy characters, like Catwoman, Firestorm, Aquaman, Hawkman/Hawkgirl, The Atom, Blue Beetle and Manhunter can't carry books, why on Earth would anyone greenlight a Magog ongoing?

My mind boggles. Or is boggled.

At any rate, are any of you out there Magog fans? If so, let me know below; I'd like to hear from you, as that would indicate giving the guy a monthly comic isn't as mind-bogglingly strange a decision as it seems to be to me.
Posted by Caleb at 1:35 PM

I think it's *because* Hawkman, Firestorm and everyone else you mentioned can't support a book that they're trying Magog. If I'm Dan Didio, I *know* a new Atom series is going to get cancelled before long, but Magog? Well, who knows *how* long they can keep that up until they try it? It's kind of a throw-whatever-you-can-against-the-wall-and-see-what-sticks approach, but Stan Lee basically built Marvel that way in the 60s.

I'm not actually a Magog fan, and I don't think this will last past ten issues, and turning what was essentially a parody creation into an ongoing lead is probably not a good idea, but at least it's a *new* idea. Apparently, DC is at a point where taking a chance is at least as economically viable as taking another stab at something "safe," and in the long run that could lead to good things creatively, right?

Interesting creative team, but agreed this is a perplexing launch (I thought the same thing about the origin point related to Cable/90s anti-heroes). My guess is it's building to something Crisis-y or KC related. Starman's still going to be on some special track that suggests something of the same.

Hm. That throw everything against the wall idea is kind of interesting, as it does seem as if every DC property has been thrown against a wall in the last four years--Bat Lash, Haunted Tank, Ambush Bug, Omega Men, El Diablo, The Wyrd, etc.

Not to spoil anything, but this week's issue of Superman implies some connection between Magog and the Red Circle and Milestone characters (Although it may just be that they're all new).

Maybe the Magog series was the price DiDio had to pay to Giffen in exchange for sitting on the last issue of Ambush Bug for about ten thousand months or so...

One presumes that DC has more to gain by pushing new or underused IPs than releasing another Hawkman book. It might sell less but if you can sell a toy out of it or something, it probably makes WB more money than the book selling well?

Maybe Giffen just wanted to do it, though this does sort of smell as a project Didio handed him.

Maybe it's just in the House of M: Well-written Gage Mini-Series collection that Marvel seems to be doing.

My confusion isn't over the release of a Magog series, so much as why would they put creators who have a rather good reputation on a series no one will buy . . . when they have so many series already released that are tanking so poorly? Why not save the Titans/Teen Titans books? Do something about Wonder Woman? Booster Gold? Vigilante? Brave and the Bold? That Peter Tomasi book with the guy with the A on his shirt? Hell, Justice League?

Don't forget that the Red Circle characters are getting two ongoing series too, and readers don't even KNOW yet if they have any interest in those characters because the one-shots haven't been released.

The problem isn't the oddball books they're planning to release, but the books they already have out and are apparently unable to support.

My guess is this is part of the semi-canonization of Kingdom Come. Or it would be if I was doing it. I mean-- crap. You could have a comic with Magog teaming up with Damien/Ibn al X, & with...whatever, the people from Kingdom come. Wildcat II, etc. That might be okay?

DC has this...PROBLEM. Where they take every single parody character & then try to make them cool. The PROBLEM is where it sometimes WORKS. Or well, people like it...I won't say it "works" per se, but it will be popular. Et tu, Lobo?

I think 52 helped turn Lobo back into a parody again. Unfortunately I'm not sure he's shown up since.

I´m definitively a Magog fan!
No... just kidding, matter of fact I hate it, I REALLY do. I would like him if he gets Barry Allen and Hal Jordan to the grave again, at least.
I hate the extra stupidity that STILL goes around in DC, it´s just like superman, the same sh*t of the 30´s, but revamped and reimagined for new audiences. You should write an article about it. Super hero comics keep being the same retarded medium as ever, just a bit more disguised

Any DC comic that is not Batman, Superman, Action Comics or Detective Comics is eventually going to be canceled. Those four are the evergreens.

Every other book should follow the course set out by Rogers on Blue Beetle (and Cornell on Captain Britain & MI13, I read) and install an option for a satisfying conclusion by the 25th issue.

There won't be another 100-issue series like Nightwing or Birds of Prey from DC anytime soon.

y'know not to defend or even explain this but but in the day Giffin did a pretty good job of turning a parody character (Lobo) into a hit machine.

Like pretty much everyone else, I am not a Magog fan. However, I do know who he is from "Kingdom Come", so that is better than hauling a totally fresh character out.

There is really not much there in terms of continuity. Unlike Hawkman, there isn't a "how does that relate to Hawkworld #14?" potential with every issue.

Finally, he has never had a series canceled. If people like what Giffen is doing by issue #6, then unlike Aquaman they don't automatically have it on cancellation watch.

It is a desperate move, obviously, but there is an off-chance it might work.