Not trying to be a jerk or beat a dead horse or anything, but...

Okay, in one of his Cup O' Joe columns Marvel EIC Joe Quesada was asked about the Marvel Divas #1 cover by J. Scott Campbell, in which the pin-up and cover artist draws the four leads in-costume with identical bodies and expressions; a background-less image that seems to have little to do with the interior of the book, and is aesthetically quite different than the work of the series artist,Tonci Zonjic.

A fan submitted this question for Quesada to answer:

About the "hating" on Marvel Divas, let's call it what it really is—criticizing how sexist this book appears to be. If Marvel produces comics that are offensive to female readers, why shouldn't people "hate" on it? Why would I want to support a company that produces offensive, sexist material? Why shouldn’t everyone speak out against it? While the book hasn't come out yet, what has been released so far is blatantly sexist. But what troubles me the most is that Marvel thinks people want to read this, and this constitutes strong female characterization. Does Marvel actually want to attract female readers or is the whole point that Marvel Comics are only for guys?

You can read Quesada's entire 700-word answer at the link above. I already mentioned the nonsensical logic of saying, "If you’re Marvel reader and truly feel we’re sexist, then why are you reading our books? Now, perhaps you’re not a Marvel reader, then if that’s the case, I’m not quite sure what you’re criticizing if you don’t read our books?"

And I've also expressed my incredulity of his not only liking Pink, but publicly admitting so.

Reading through Marvel's solicitations for their August books the other day, I noticed something odd, based on Quesda's answer to this fan question, so I'd like to parse his statement a little further.

You haven’t read a lick of this story yet!

Please, I can buy you saying that you’re cautiously pessimistic based upon what you’ve heard so far, but to throw around allegations like that is completely unfair, not just to Marvel or myself, but to the creators and editors who are working on this book.

Creative types and defensive fans make arguments like this pretty frequently. Yes, it is completely unfair to judge a book by its cover. On the other hand, what's so unfair about judging a book cover by itself? That's what's going on here. Sure, people are inferring certain attitudes at Marvel, from evil and misogyny to innocent cluelessness or being out-of-touch with potential demographics the company could be exploiting. But that aside, there is a lot of criticism leveled at the cover image as a standalone image itself, and that's certainly valid.

Is it sexist? I dunno. After that one Heroes for Hire cover, it's actually hard to think of any Marvel cover as comparatively sexist or exploitive (That is, no matter what the image may be, you can always say, "Well, it's not as bad as the tentacle rape one"). It's not a very good cover though, from a technical stand point, and I think it's generally uncool to to use cover artists whose styles are so different from that of the interior artists.

But at the end of the day, who gives a shit? This is a book that was never going to sell more than 20,000 copies. Maybe putting a "hot" cover artist like Campbell on it bumps that up to 25,000, and the "is it sexist?" controversy knocks it back down to 24,000. It's a tempest in a tea pot, but that's only because the comic book direct market is itself a teapot.

Anyway, this is the part that inspired the post:

The cold hard reality of publishing and trying to sell our books to as many people as possible, so here’s an example of what happens more often than you may think here at Marvel. From time to time, we’ll be launching a title that doesn’t focus very heavily on the super heroic. From time to time I’ll get a cover sketch and it doesn’t have a costumed hero or villain on the cover, what we internally refer to as a “quiet cover.” On those occasions, more often than not, I ask my editors to direct their cover artist to give me at least a first issue cover with the characters in costume. Why? Because it will help launch a book that will most likely have trouble latching onto a large audience. We want to give every title the best possible chance to be successful. Marvel Divas is no different and that’s why you’re seeing our strong female leads in their super hero personas.

...then there's the part where he says he likes Pink and that she uses sex to try and sell her CDs (do people buy CDs anymore...?)....

Comics are no different and as much a part of the entertainment business as any other medium, and the cold hard truth is that if we were to launch Marvel Divas with a “quiet cover,” I guarantee you the book would be canceled before it hits the shelves. That’s it in a nutshell, I could sugar coat it for you and give you a million other reasons that would sound plausible, but that’s not what I do.

It is cool that Quesada spent 700 words taking the question I guess, even if all the answers don't really add up to anything. (As a miniseries, this thing is canceled before it hits the shelves anyway, and if they can't a Captain Britain series starring Blade and Dracula above cancellation levels, I have a hard time believing a book starring four unpopular characters is going to sell above cancellation levels).

But regarding the "quiet cover," with the characters out of costume? Covers of women in clothes other than superhero comics doing something other than posing in a field of blank space, surrounded in a ring of fire? Those are to be avoided? Because these are all Marvel covers from August: 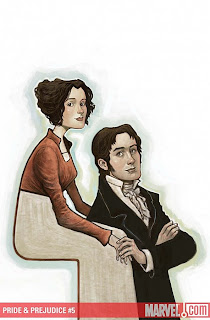 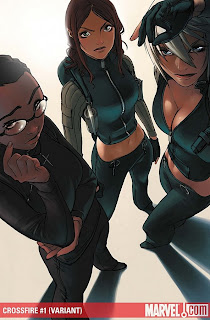 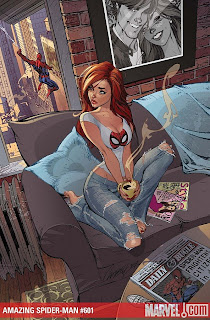 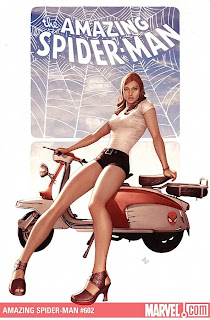 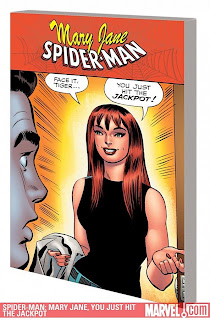 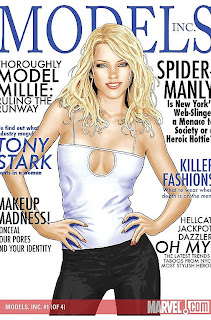 It might be unfair to compare all of these as if each of them is the exact equivalent of Marvel Divas #1. Some of these have "hot" artists like Greg Land and Campbell drawing them; the Mary Jane covers are selling sex so if that is the beginning and end of your problem with the Divas cover, it still holds true; MJ is, if not more popular than the Divas cast, is at least starring in a very popular superhero's book, and Marvel has made her the pole around which abig, controversial plot is revolving; Pride and Prejudice is expected to sell like crap anyway and is only being published to make back some money before publishing a trade and so on.

Still, quiet covers with gals in street clothes, just kinda of sitting or standing there not being superheroic. And all from one month; you can look backwards and find a tone of examples of quiet covers on Mary Jane/Spider-Man Loves Mary Jane or Runaways.

I can't think of any reason why Marvel Divas couldn't feature a cover exactly like the Campbell image of MJ, only with Felicia Hardy instead of MJ in it, you know?

My biggest problem with that drawing is that it's just really crappy. My second biggest is that it's not respectful to the characters, none of whom are brainless sluts.
Well OK, Black Cat is kind of trampy.

"It is cool that Quesada spent 700 words taking the question"

No, it's really not. All he did was try to dismiss her complaint with the sum of his powers of Spin. If he ignored the question, at least it would be a more clear sign that he had something to hide or avoid, but he came off as more scummy in his actual response than if he hadn't said anything at all.

Yeah, I don't know why Quesada even bothered to address the question, it just made him look even worse.

I'm not even really all that exercised about the cover, although I agree, that it is not my cup of tea. It's the description or solicitation of the book that sticks in my craw. First, it's "sudsy" then it's a serious look at the problems women face, then it's back to sudsy fun again. Which is it? WHAT is it?

All I have to go on, is the solicitation...which sounds pretty ridiculous, and the cover. For Quesada to then come back and say that women are being mean to him is pretty disingenuous.

The only thing that cover induces in me is a refreshed curiosity about the 'Patsy Walker: Hellcat' series written by Kathryn Immonen & illustrated by her hubby. That's coming out in TPB soon, right?

I don't read superhero books anymore, but I quite loved the Immonen's collaboration in 'Never As Bas As You Think'. Anybody wanna say whether 'PW:H' is worth the price of admission?

Anybody wanna say whether 'PW:H' is worth the price of admission?I dunno, I never finished it. I think there were still two issues left to go when it hit a delay or I saw a shiny object or something distracted me from finishing it.

The art is really great, and I really, really, really loved that part of things. The script is...weird. And keeps getting weirder and weirder, until it reminded me of a high-concept manga series half-way through. I imagine it will read better in trade then it did in chapters with a month or so between each.

Patsy Walker: Hellcat is trippy and adorable, and I really, really enjoyed it.

And keeps getting weirder and weirder, until it reminded me of a high-concept manga series half-way through.Patsy Walker, in this mini, is Marvel's Haruhi Suzumiya.

And if Roberto Aguirre-Sacasa's previous work is any indication, Marvel Divas is going to be an amazing character piece, and not even remotely what has been advertised.

Sold and sold. Thanks, all! Ordered it today-- along w/ the 100% HC and the second FREAKANGELS collection.