This is the cover of The Second Part of the Secret History of The Ineffables, a self-published comic book from Craig Bogart, a local comics creator and member of the Panel collective: 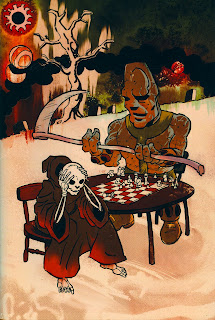 Who are The Ineffables? Well, you can find out pretty much everything you need to know here on Bogart’s website, under “Who are the Ineffables?” They’re a sort of Fantastic Four/Challengers of the Unknown science and exploration superhero team, and they defend the mysterious city of Mystery City.

Among there members are Mason, some sort of stone…alien…man…thing that looks like one of those things on Easter Island heads climbed out of the ground to reveal a whole body, and then proceeded to go on adventures.

Another member is Abraham Lincoln who, as Bogart’s site explains, “faked his death to investigate a Confederate plot involving the Fountain of Youth, he has rejoined The Ineffables as the world's toughest patriotic comic character!”

Does that sound awesome? If so, you and I concur on what makes for awesome comics, so please read on. If not, you may want to skip this post, as I’m just going to go on pointing at things in this comic and saying, “Isn’t this awesome?”

As the title indicates, this comic is the second part of a story about the team’s “secret history,” and while I’ve read some earlier issues of the series a few years back, I did not read the first part of the secret history story.

And, believe it or not, it doesn’t really matter all that much. This was a completely accessible and enjoyable single issue of a superhero comic that seems to have been created—consciously or unconsciously—with the idea that it may be someone’s first exposure to the Bogart’s comics world.

Accessible, new-reader friendly superhero comics that stand on their own as complete works, whether they are part of a larger, ongoing narrative or not—a radical concept, I know.

It opens with a Justice League-like superhero team team known as The League of Protagonist battling Professor Iniquity on his satellite base, and even the mighty Mister Protein and Emasculatra can’t seem to fight their way through his secret weapon.

Which means Lincoln has to take off his shirt: 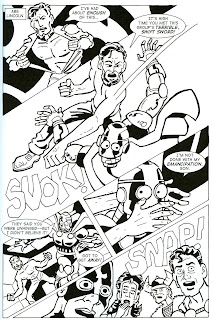 He was booted off the team shortly after that, having proved he was maybe a little too hardcore, a story he explains to a bartender while throwing back drinks.

He tells the attentive bartender how his new team The Ineffables have died. Without spoiling one of the neater, big crazy ideas in this comic, the border between the worlds of the living and the dead were broken down, and the city was being overrun with the undead.

This allowed Mason to recruit new teammates who have gone on to their final reward to help them save the day: 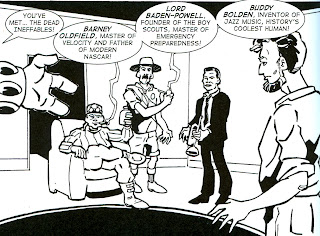 And you better believe that infiltrating the headquarters of the billionaire industrialist bad guy, defeating him and saving the day will require the ability to drive things very fast, several skills learned in scouting and extremely cool jazz music.

Unfortunately, the battle to restore the border between the living and the dead results in Lincoln’s Ineffable teammates ending up in the land of the dead, hence his drinking in a bar telling sad stories about his past.

At this point, his bartender can take it no longer: 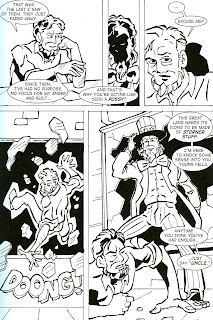 Holy shit, is this the Abraham Lincoln vs. Uncle Sam battle you’ve wanted to see your entire life, perhaps without even knowing it? It is! But I won’t scan that page; I’ve probably spoiled enough of the issue as it is.

Suffice it to say that Uncle Sam punches Lincoln so hard that he pierces the veil and ends up in the dimension of the dead with his teammates, who must find a way out of the afterlife and back to their home…but not before they learn something shocking about the nature of the universe.

I’m generally pretty leery of self-published work, for the obvious reasons (including the fact that I’m working on self-published stuff and, rest assured, it is not very good), but Bogart’s book continued to surprise me with fun stuff. It’s plotted like a less-serious Fantastic Four and full of goofy gags given completely deadpan delivery, and while Bogart is no Jack Kirby (this isn’t a book I’d likely buy for the quality of the artwork alone), it’s clear, easy to read and gets the job of transmitting what’s in Bogart’s mind to a reader’s mind through the eyes, which is what comics art is supposed to do.

In other words, the art works, and the writing works great, making The Ineffables…well, at the risk of closing on an overly-obvious joke here, there’s something ineffable about it.
Posted by Caleb at 6:27 PM

The Ineffables is the shit. Everyone should go check it out right now.

Thank you for drawing this to my attention