I spoke too soon.

I know I just posted a couple of hours ago that I was going to be taking a few days off of posting, but in the time since I learned that Blog@ is going off-line for a bit while the site changes servers and gets and upgrade and stuff. Since I had already written this week's installment of 'Twas the Night Before Wednesday, my weekly look at some comics being released the following day, and since it's time-sensitive, I figured I'll just post it here so as not to let it go to waste. 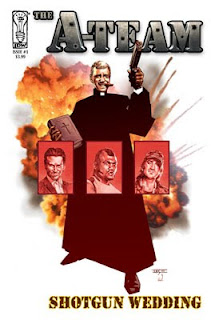 A-Team: Shotgun Wedding #1: This is the first of IDW’s A-Team comics out the gate, a four-part, bi-weekly limited series co-plotted by Joe Carnahan (director of the upcoming film adaptation of the TV show), written by Tom Waltz and drawn by Stephen Mooney. Will it be any good? I don’t know, but John K. Snyder’s cover of the first issue features Hannibal chomping on a cigar, dressed as a priest, with a gun in one hand and a bible in the other, with an explosion in the background. So it definitely looks promising.

Batman and Robin #10: The next pencil artist playing Robin to writer Grant Morrison’s Batman will be Andy Clarke, who, with Scott Hanna, will providing the art for the story arc which kicks off this issue: “Batman vs. Robin.” Preview here; check out little Damian in his business suit! He’s so adorable in his evil!

Ghost Projekt #1: Writer Joe Harris and Steve Rolston launch a five-part miniseries about a U.S. weapons inspector and Russian agent investigating an abandoned Cold War-era research facility in Siberia…and the strange weapon stolen from it. You can download a 13-page preview here.

Hellboy: The Wild Hunt Vol. 9: Writer and cover artist Mike Mignola and artist Duncan Fegredo weave a tale of Hellboy, an ancient order of monster hunters, ancient giants and a foe from a previous Hellboy arc in this $20, 190-page trade. You can see a preview
here.

Hulk: Let The Battle Begin #1: This looks like one of those fairly random Marvel one-shots pairing a new story with a back-up reprint or suchlike. Jesse Snider and Steve Kurth tell a Hulk versus the Wrecking Crew story, and the solicitation promises “rocking extras giving YOU the goods on WORLD WAR HULKS.” It’s $4 for a 40 pages.

Justice League: The Rise and Fall Special #1: This one-shot co-written by James Robinson and J.T. Krul follows up on the developments that occurred in Robinson’s Cry For Justice miniseries, and I have no idea where it’s going next or how it fits in with Robinson’s run on JLoA, and why it’s happening in a one-shot instead of in JLoA. Mike Mayhew handles the art, and it’s a $4, oversized issue. Some details on the event/story here.

King of the Flies Vol. 1: Hallorave: The first volume in a planned trilogy of graphic albums, this $19, nine-inch-by-12.5-inch, 64-page hardcover by European creators Mezzo and Pirus tells the story of a teenager in conflict with his stepfather. You can check out a slideshow of the incredible artwork and a collection of reviews here.

Lockjaw and The Pet Avengers Unleashed #1: Lockjaw, The Pet Avengers, Chris Eliopoulos and Ig Guara are all back for a second go round. Check out Roger Langridge’s cover…they really oughta get him to do a one-shot or something.

The Mystic Hands of Dr. Strange #1: The Sorcerer Supreme is the latest Marvel hero to get his own black and white anthology one-shot. Frank Brunner, Mike Carey, Kieron Gillen, Ted McKeever and Peter Milligan are among the creators contributing the four short stories to this $4 special.

The Twelve: Spearhead #1: The stars of the seemingly abandoned limited series The Twelve return in this oversized, $4 one-shot written and illustrated by Chris Weston, the artist of the ill-fated series starring a dozen of Marvel’s minor Golden Agers. I’d really like to see Marvel finish the series they started, but I like the idea of new material featuring these oddball heroes a heck of a lot better than having them remain unused until such time as the series actually concludes…if it ever does.

Warlord: The Saga: This $18, 145-page trade paperback collects the first six issues of the current, Mike Grell-written volume of the Warlord monthly, in which a team of newcomers arrive in Skartaris and cross paths with Travis Morgan and his running crew. Joe Prado, Chad Hardin and Walden Wong provide the art; Grell’s art should show up in the next volume, although he handled the covers for these issues.
Posted by Caleb at 11:54 AM

I've wanted that since I read my first couple of Lucifer issues.