The second half of Mark Millar and Bryan Hitch’s short run on Fantastic Four is collected in Fantastic Four: The Master of Doom, and it ends quite a bit more strongly than it began.

Ironically, the last few issues were ones in which the presence of Millar and Hitch were increasingly diluted, as Joe Ahearne scripted the last two issues from Millar’s plot and Hitch worked with additional pencilers Neil Edwards and Stuart Immonen on those issues (Throughout the eight issues collected in this volume, seven different artists assisted Hitch on inks, although the artwork remained surprisingly consistent looking until Hitch had to be helped with pencils too).

I think this fact is more of an interesting coincidence than any sort of indictment against the two guys with their names above the logo on the cover. While they may not have done as much during the finale as they did during the build-up, it’s very much still their story, and the fairly satisfying conclusion is clearly one that Millar had envisioned and been working toward, before either getting too busy or moving on to devote his full attention to more successful and lucrative endeavors.

The volume title takes its name from the climactic story arc, which is teased and foreshadowed throughout the entire volume, with little in the way of a meaningful break (The family’s trip to spend the holidays in Scotland and the children’s encounter with a Lovecraftian monster god—which Hitch does a great job of designing—being about it).

So who is this Master of Doom? Well it’s, um, Doctor Doom’s former master, the so-called original supervillain under which Marvel Comics’ greatest bad guy apparently apprenticed under for a while. He looks a bit like a naked Judge death in a veil, and he’s accompanied by a new apprentice, and the pair of them are traveling through alternate realities, killing Marvel Universes and Fantastic Fours on their way to check up on how Doom is doing in his dimension against his Fantastic Four.

I can imagine this development may have proved galling to long-time Marvel fans, as the idea that Doctor Doom—who is really pretty much a perfect supervillain—needs his origin retconned can’t have been a popular one, but in trade form one doesn’t have months between issues to think about whether or not that’s a dumb idea and, if so, how dumb an idea it actually is.

Millar does a fair job of presenting the Master as a terrible, apocalyptic threat, using many of the hyperbolic tricks Grant Morrison employed during his JLA run, and while Hitch’s designs for the new villains are pretty uninspired, he does occasionally land a great, menacing image, like the pair riding black vapor trails through a shining New York afternoon.

So the villains are built up as the ultimate of ultimate villains, they dispatch everyone, even Doctor Doom, and then it’s up to the FF to save the day against these impossible odds. They eventually see the way to do it, but to do so they’ll have to do something awfully unheroic—kill an innocent person—and, faced with two bad choices, Reed Richards must find the impossible third way (You know what else is ironic? That this story is plotted by Mark Millar, who wrote Civil War, in which Reed Richards constantly chose the lesser of two evils instead of either bothering to find the impossible third way).

It all comes down to our FF and a few allies trying to hold off armies of infinite, alternate universe versions of themselves while also dealing with a guy who seems like the biggest Big Bad they’ve ever battled.

It’s an exciting, imaginative story, and one that ends much more optimistically and, well, heroically than almost anything I’ve read from Millar since he was writing DC’s superheroes.

That’s followed by the resolution of the Ben Grimm/Some Random School Teacher Lady sub-plot, which is remarkably effective and even a little touching.

I’m still not convinced Hitch is the very best artist for The Fantastic Four (which, of course, does make him an interesting choice), but his art seems to flow better with Millar’s scripting through most of this volume (perhaps because he was slowing down, and didn’t have the time to over-reference and over-render everything to the extent he did earlier in the 16-issue run?).

He seems to have gotten a really good handle on The Thing by the time he leaves the book, giving the big brick gorilla expressive, soulful eyes, but for everything he does right, he does something as wrong as Doctor Doom’s nose—no longer the little bolted on triangle of Kirby’s design, but a big, honking metal bird-beak. I can’t look at Hitch’s Doom without giggling a little; it’s just too realistic, to the point of complete silliness.

I don’t think I’d go so far as to say that this volume was so good it redeemed the first volume (and, obviously, it didn’t suddenly turn the book into the sales juggernaut Marvel was probably expecting a Millar/Hitch book to be…and the major development regarding Doom seems to have so far been pretty much ignored in the Dark Reign business I’ve read, despite Doom playing a prominent role). But even still, it ended well, so that I left the Millar/Hitch FF run with much warmer feelings toward it then I had at the beginning, and that’s certainly something.

OH, YEAH: I forgot to mention that there’s a point in the Master of Doom story where the big bad guy and a guy with similar powers think really hard at one another and bend reality and fill up a splash page with Marvel characters and alternate reality Marvel characters, which results in this: 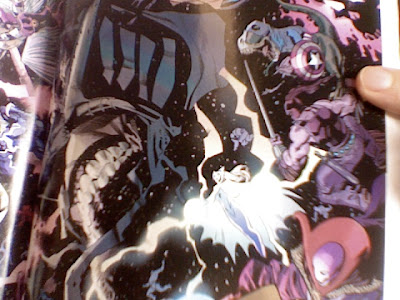 Was there an issue of What If…? entitled What If Captain America was a Tyrannosaurus Rex for Some Reason…?

As well, the 1985 series and the FF run coincide somehow with the absolutely turgid Old Man Logan run, which I would advise not to read... ever.

@matthew - The group of heroes from the future that shows up on Millar's Fantastic Four has Wolverine and a Hulk among its members. That Hulk is the baby Hulk adopted by Wolverine at the end of Old Man Logan, and likewise the future Wolverine on FF is the same character. However, I don't know hoe 1985 and Old Man Logan connect with each other.

And I agree with you, Old Man Logan was nothing to write home about...

Well, I've requested both 1985 and Old Man Logan through inter-library loan, so I guess I'll get all caught up on recent Mark Millar shortly.

Thanks for the info, guys!

I had absolutely no interest in this story or Millar's run on character I feel have outlived their usefulness, but this review really makes me interested to check out this final story.

I would have liked this a lot more if I wasn't totally convinced that Millar lifted the concept either in part or wholly from an old episode of the "Dungeons and Dragons" cartoon where Venger's former master returns and basically wants to kick his butt for not subjugating his world, etc. The same problem that seems to creep through all these sort of retcon tales; the big bad is TOTALLY INVINCIBLE for a few issues, then suddenly as easy to push over as Paste-Pot Pete. And Hitch's Doom is just too weird.