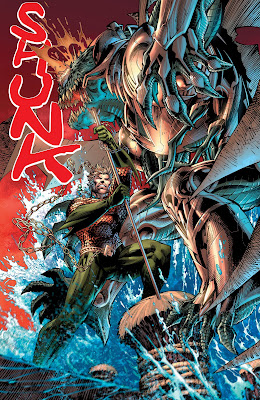 So I guess this new, brutal, stab-and-decapitate-and-ask-questions-later version of the Justice League is here to stay then? Their official stance on lethal force in the "New 52" is, "Yeah, cool, whatever"...? Because the above image of a heavily-sideburned Aquaman just cold SHUNKING something to death with a trident to the face is from last Wednesday's Justice League #4, on the splash page immediately following a scene where he summons a bunch of great white sharks to eat more of Darkseid's minions. Apparently. I didn't actually buy and read the issue because, come on, $4 for 20 pages that read more like 10 pages? I am not made of money. (If I was, I would have long ago been captured by someone and probably caged in a vault, where I would be periodically visited to have a piece of my body removed). DC is so proud of this new bad-ass Aquaman, and his spot on the new bad-ass Justice League, that this was among the scenes excerpted for a preview of December 21's releases, which you can read here.

You know what else is weird? Apparently the Conan O'Brien of the new New 52 U. does Aquaman jokes, and was doing them before anyone had ever even known there was an Aquaman...? That's kinda weird, isn't it?

Anyway, let's not dwell on the comics I didn't buy and didn't read, because that is actually the exact opposite of the point of this recurring feature...


Daredevil #7 (Marvel Entertainment) There's a neat twist here, as Mark Waid and Paolo Rivera put our hero and a group of children in a surprisingly tense, life-threatening situation that's far, far removed fromt he world of superheroes and -villains that he usually finds his life-endangered in. Perhaps it's the removal from the usual that makes the threat seem so effective...? Another great issue of a pretty great series.


Tiny Titans #47 (DC Comics) Art Baltazar and Franco have been choosing organizing principles by which to write issues of this title for a while now, and this time there are two: A scout-like meeting of Team Nucleus (a gathering of all the tiny Tiny Titans: The Atom, "Ryan", "Adam", Molecule, The Ant and Bumblebee), which leads to Bumblebee (and Miss Martian) babysitting the various baby characters (Aquaman's kid Arthur Jr., Kid Devil and Batman's brats Damian and "Jason Toddler"). It's cute and funny, if that's not a completely redundant thing to say about a Tiny Titans comic.

I'm not so sure about the dancing tiger gag, though. Was that meant as silliness for silliness' sake, or is there a riff on DC trivia or a pun on an expression that I'm just not thinking of...?


Wonder Woman #4 (DC) Hey, Wonder Woman and Daredevil on the same day means the two best Big Two super-comics are out on the same day! That makes for a much more pleasant Wednesday afternoon reading experience than usual. In this issue Brian Azzarello does what amost every modern Wonder Woman writer does at some early point in their run on the series—decimates the population of Paradise Island as a way of alienating Diana from her sisters. But Azzarello does so in a more unique way, one befitting the interference of the Greek gods (and one that's a lot less bloody and hard to reverse than some of the previous purges).

Azzarello also gets around to using Ares, one of Wondy's most consistent foes since the Perez reboot, and he's redesigned to look like a regular human being instead of the armored giant Perez designed him as, just as was done during Greg Rucka's run on the title, yet this version is even different than the redesigned version—That is, he's a redesign of a redesign, that looks rather radically different from both of the previous ones. Also, he goes by the name "War" instead of "Ares," further distancing the character from the previous iteration.

But the best part of Azzarello and artist Cliff Chiang's fourth issue of the promising new series? That may be Diana in "plain" clothes (still wearing WW-branded chocker and arm-ringlet, though) going to a rock club with Zola, Stryfe and Hermes, the last of whom is so badly disguised that he might as well be wearing a brown trench coat and wide-brimmed hat, Thing or Ninja Turtle-style. (You can see Chiang's Ares and Wondy and Hermes' club-wear in this preview at Comics Alliance).
Posted by Caleb at 6:52 PM

I'm still trying to figure out how this new version of Aquaman was anybody's idea of a joke. He's like Wolverine in scales. I admit to having a soft spot for Aquaman (when he's done right), but I'm just really confused by this whole treatment. Why is he a laughingstock if he kicks this much behind?

I got into a rather inane argument with another comic fan on another site because I took issue with DC's seemingly casual relationship with cold-blooded murder. He thought I was being an immature baby. I thought violence for the sake of violence was puerile and sophomoric. I'm glad to see that you agree, Caleb.

I have to wonder about Ares/Wonder Woman given the Ares/Xena thing. I mean, I realize Ares was a WW foil long before Xena, but this repetition seems somewhat awkward.

Did DC ever make an honest attempt to tie Arthur's Atlantis to Arion's homeland?

Maybe it's just me, but since Art's been through as many reboots as Hawkman seems like a broader retooling of the character could've been beneficial. If the fish jokes were wearing thin, maybe editorial should've re-classed him as originating from a more science-magickal tradition. He & Mera would've been good company for Buddy Baker & Alec Holland, back in the day...

Or maybe they did exactly that and I was too busy reading Ambush Bug & 'Mazing Man to notice.