Batman '66 #2 (DC Comics) There are two stories in this second issue, both written by Jeff Parker. The cover story features art by Ty Templeton, one of my favorite artists and one whose work I see way too infrequently. As the cover alludes to, it features the rather natural team-up between The Penguin and Mr. Freeze (The latter of whom I don't even remember ever appearing on the show, but then, my most recent memories of the show are over 20 years old at this point).

Freeze has created a gigantic iceberg to block traffic in and out of Gotham Harbor, and it's been declared the independent nation of Penguinia by "that Pompous Prince of Perilous Plots, The Penguin," who rules it as Emperor Penguin. It's part of an elaborate extortion scheme—if ships want in or out, they have to pay his toll—that also guarantees him a certain degree of safety from the police and the local vigilantes. Templeton's Burgess Meredith as the Penguin is so spot-on it's a little on the disturbing side, while the other characters all appear slightly more generic, looking like Batman and Robin rather than Adam West and Burt Ward, if that makes sense.

It's followed by a piece drawn by Jonathan Case, featuring a character I assume is from the TV show that I have no memory of, Kathy Kane kinda sorta appearing as Batwoman, and a new (?) villain. There's also a pretty incredible hallucination scene in which Robin expresses frustration with Batman for going out on a date with a girl instead of hanging with him (sexual jealousy, or anger at Batman for breaking the golden "bros before hos" rule?), Chief O'Hara as a leprechaun and, um, these panels: 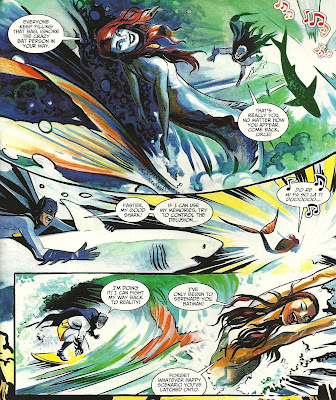 As with the first issue, I was struck by how much of the tone of the TV show (that I remember) and how much of the characters and their voices are retained, while Parker and company take full advantage of the medium to present the sorts of special effect heavy sequences that never would have made it onto the show, due to either their prices, the lack of technology to pull them off, or the all-around danger to stuntmen.

Aside from the soon-to-be-canceled-in-favor-of-a-direct-to-trade format, this is the only Batman comic book I'm reading in comic book form at the moment. And I'm totally okay with that; this is good stuff. I hope it's also super successful, enough so that someone at DC realizes there may be a market for superhero comics that are fun and funny (Oh, I read the first issue of Batman Beyond Universe too; that was pretty good. I didn't really enjoy the title feature much—that was always my least favorite Batman cartoon—but the back-up featuring the Justice League Beyond, which consists of the "real" versions of Superman, Barda, Mister Miracle and Captain Marvel, was pretty great). 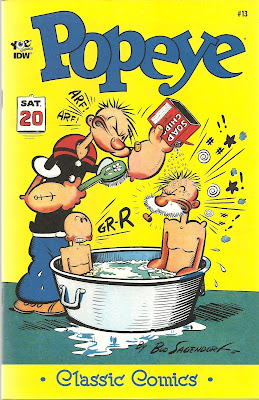 Classic Popeye #13 (IDW) Three stories in this issue (Four if you count the prose "A New Port!", which I don't, because I never read 'em—Prose? What am I? A college perfesser?): Popeye, Olive and Wimpy sail for Gold Island under the direction of a man so afraid of ghosts he lives in a locker, the same trio (plus Swee'pea) encounter Gopher People out west and, in the final story, Pappy tries to take advantage of Wimpy's mooching in order to avoid work, and this time Wimpy comes out on top. Of the three, the first was my favorite, as I love the way Sagendorf draws ghosts, and, since "spiricks" are among the only things Popeye's afraid of, there's always a little extra tension when they're around, as they can present a conflict he can't just punch his way out of.

Daredevil #30 (Marvel Entertainment) My only real disappointment with this issue was the identity of the person sitting behind the desk in Matt Murdock's office, who he said in the cliffhanger ending of #29 was the last person he thought would ever take a job with him. I was kind of hoping it was going to be The Silver Surfer (who was the announced guest-star for this issue), because I think The Silver Surfer would really add something to the tired old courtroom drama, or perhaps Namor, because Namor is awesome in almost any role, but I don't think we've yet had the opportunity to see him be awesome in the role of an attorney. At the very least, I thought it might be Jen Walters, AKA She-Hulk.

But no, it's just that ADA gal from the earlier issues that went on a date or two with Matt Murdock and then lost her job because hanging out with Daredevil is bad a life choice.

The other surprise for me was a line of narration Daredevil gave upon finding himself in the same room as The Silver Surfer:


It's the Silver Surfer. An alien adventurer with the "power cosmic." And that is the extent of my knowledge because this is the closest I've ever stood to him.

I was sorta surprised to hear that simply because they're both fairly prominent Marvel characters who have supported more than one volume of a series a piece before, and they've been around a while now (DD since 1964, SS since 1966). I just sort of assumed everyone in the Marvel Universe knew everyone else at this point. It's really rather remarkable that their remain combinations of long-lived Marvel characters who have yet to have their own fight-and-then-team-up issues yet.

And that's basically what this is. A strange alien seeks asylum with Matt Murdock, asking him to take him to The Avengers before his pursuer, The Surfer, can find him.

Waid and Samnee do their usual neat effects with DD's radar vision, and explore Silver Surfer's senses in similar ways, and Samnee's depiction of the two characters fluid, graceful movements as they swing, fight, fall and fly all over the clean, urban environment's of New York City is simply beautiful comics art (No wonder Samnee's credited along with Waid as "storyteller" rather than simply as artist this issue).

Legends of The Dark Knight #11 (DC) This issue is one, big, 30-page DC comic book written by Paul "DC Is In The Toilet Right Now" Jenkins, whose Batman writing I just experienced and found pretty wanting just the other night. I'm actually pretty surprised DC published this. book at all, given how outspoken Jenkins was about the state of the publisher. That, and there's not really compelling reason to publish it: It's not very good at all, it's a completely generic inventory story that no one really needed to read and the artist Omar Francia isn't an artist on Jenkins' level whose work screams to be seen.

I have this on my pull-list at my local comic shop though, and don't really pay attention to what's going to be in it each month (it's one of DC's digital-first titles), so every time I get an issue it's like Russian roulette—I never know what I'm going to get (That's where the comparison to Russian roulette stops, however).

So this is a Batman Vs. Calendar Man story, which one would think would be a reason for celebration, because Calendar Man is the best, but this is not the Calendar Man we know and love from comics like Batman: Shadow of the The Bat #7-#9 ("The Misfits," by Alan Grant and Tim Sale) or Batman: The Brave and the Bold #19 (Landry Q. Walker and Eric Jones' "Final Christmas"; you remember, it's the one where Batman and Adam Strange accientally invented Christmas through time travel and cosmic coincidence).

Rather, this is a a Calendar Man kinda sorta based on the Tim Sale designed version that appeared in he and Jeph Loeb's Batman: The Long Halloween and Batman: Dark Victory, the dumpy, coy, bald guy with the abbreviations for the months tatooed in a ring around his head (The same version has been appearing in those weird advertorial strips DC has in the back of a lot of their books now, those "Channel 52" features, for some reason).

I don't like him. That design made perfect sense in those comics stories, as Calendar Man's only appearances were inside his cell at Arkham, and he didn't have access to his costume. But here he's on the outside, and rather that donning his awesome costume, Jenkins and Francia have him as nothing more than a bald thug with an idiosyncratic tattoo. It's an Arkham video game or Christopher Nolan movie version of the character, and it's not anywhere near as awesome as a guy in red pajamas with a calendar for a cape and a pretty sweet cowl.

His scheme is to teach the people of Gotham City about the importance of the historical date of The Fourth of July, by hijacking a fireworks display at a Gotham Knights baseball game and blowing people up with fireworks or something (Oh, also, I guess he's a terrorist now...?). He does don a blue coat and Uncle Sam hat for this portion, but, eh, there's no improving on his original costume, you know. Batman's plan to stop him, meanwhile, is to fly a giant bat-shaped plane into the stadium, jump out of it, and beat the living shit out of him.

The story opens with a quote from Kurosawa's Rashomon, and then proceeds to bite off the that premise of telling the same story from different angles, changing it subtley in each point of view, a riff already done in a Batman story (The "P.O.V." episode of Batman: The Animated Series). I didn't like that episode all that much, either. But I did like it better than this.

I was pretty curious about this given my dislike of Knight Terrors, which Jenkins co-wrote along with artist David Finch (and which apparently suffered from near-constant editorial interference), but even in this comic, in which Jenkins is the only credited writer and I can't imagine any editors were all that invested in it, given the continuity-free nature of the book, this Batman story was pretty lame too. I wasn't crazy about Francia's artwork. In addition to his take on Calendar Man, his Batman was of tehe heavily-armored, man-tank variety, with gauntlets that look like Transformer forearms, an dhis civilian characters tend to all have a roughly computer-animated look to them that made me feel slightly nauseous. 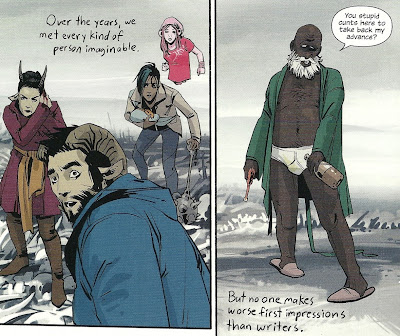 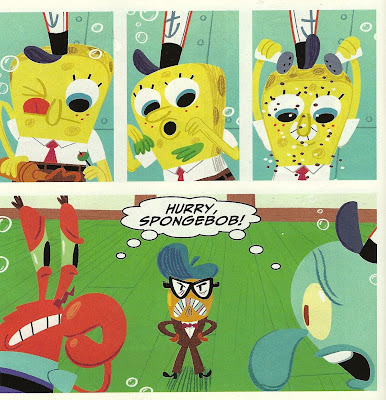 SpongeBob Comics #23 (United Plantkton Pictures) James Kochalka, Joey Weiser, Gregg Schigiel, Nate Neal, David Degrand, David McGuire and Israel Sanchez are among your contributros this ish, with Sanchez providing the most dramatic departure from the look and style of the show (those are a few panels of Sanchez's story above).

That Spongebob is wicked.

Okay, Daredevil spends the last 2 issues defending a guy from "false arrest". Here, he hands an alien requesting asylum over to (essentially) some extraordinary rendition on the say-so of a character whom he doesn't even know. Inconsistent?

Batman '66 was awesome, Daredevil was even more so, and Saga was...sublime.

Good comics! They ARE out there!

In regards to DD/SS: Waid must've forgotten about this: http://img.photobucket.com/albums/v216/Lamashtar/SpidermanDaredevil/silversurfer128-cover.jpg :-)