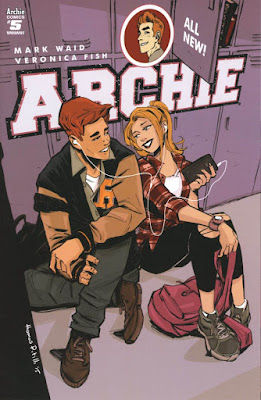 Archie #5 (Archie Comics) Writer Mark Waid gets his third artist in Veronica Fish, and, like previous artists Fiona Staples and Annie Wu, she is both very, very good and also a lady, but damn, does Archie burn through artists! In this issue, the evil that is Reggie Mantle takes center stage, as Betty and Jughead turn to the ever-scheming Reggie to help them free their friend Archie from the clutches of Veronica.

In his page-long introduction to the six-page classic Archie reprint back-up, Waid waxes philosophical about fictional villains and Reggie, and it's a pretty interesting piece, detailing what's special about the character in Archie Comics, and how he differs from other villains Waid has written. Apparently Waid himself spent some time trying to write Reggie as a more traditional comic book bad guy. "There is a valid school of thought that says that good villains must have realistic, complex motivations and sympathetic (or at least comprehenisble) goals," Waid begins his little mini-essay, and he goes on to note that he originally tried to give Reggie such things before realizing that the essence of the character is simply that he is just a jerk.

I really like these little insights into the creative process that these intros give us, especially, in the case of Archie, how a life-long fan of the medium and a career-long writer of superhero comics approaches something as different from the rest of his body of work as Archie.

Fish's works is pretty good, and close enough to Staples and Wu on the style spectrum that it doesn't look wrong or off in any way.

That said, he drawing of Reggie's sinister grin in the last panel of page nine is probably a little too sinister; it looks like he's getting ready to murder someone.

Her Veronica, in particular, is really great, and the power imbalance in her relationship with Archie neatly illustrated in the lines with which Fish draws each of them in the panels they share together.

You know, given how good both Archie and Jughead have been, I'm not so sure that Afterlife With Archie is the best Archie comic on the stands (when it is on the stands, of course) anymore... 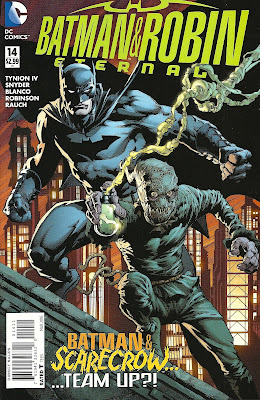 Batman & Robin Eternal #14 (DC Comics) Picking up where last issue left off, this James Tynion IV-scripted installment is divided between the "several years ago" plot and the modern plot, in which Dick Grayson, Harper Row, Cassandra Cain and David Cain are all trapped in an abandoned fortress of Mother's set to blow up in a mushroom cloud if they can't beat up all the robots and get to a jet in time. Spoiler: They manage to do it.

David Finch's foot-hiding cover ties to the "several years" ago plot, as Batman and Robin I's pursuit of The Scarecrow seems to reach its climax, and Batman and The Scarecrow cut a deal of sorts with one another, as Gotham's Master of Fear appreciated Mother's financial patronage, but found her doomsday plots too apocalyptic for his more modern supervillain goals.

The art duties are here divided between Fernando Blanco, who seems to handle the modern day sequences, and Roger Robinson (a favorite of mine from his time on the excellent but under-appreciated Gotham Knights series), who handles the past stuff. Robinson's "Year One" era Scarecrow is pretty excellent, with a simpler, smoother, floppier mask that bears a more home-made, guy-with-a-bag-on-his-head look than the character is usually drawn with (say, on Finch's cover, for example). He doesn't draw The Scarecrow with gloves either, though; why doesn't anyone ever draw The Scarecrow with gloves anymore?

Tynion did a pretty fine job writing the character, I thought, providing his motivations in a clear, precise way that make his actions seems perfectly reasonable...from his perspective, anyway.

And while Stephanie Brown doesn't appear at all, I did appreciate that one of Harper Row's last thoughts before she thought she was going to die were to diss Stephanie in some way...here, her taste in music. This was a very solid issue of a series that has pretty extreme ups and downs in terms of quality. 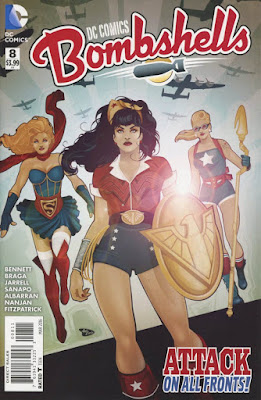 DC Comics Bombshells #8 (DC) In the latest issue of the Marguerite Bennett-written WWII-era Elseworlds adventures, the undead, Nazi-allied menace of The Tenebrae attacks our heroes on various fronts: Wonder Woman and shell-shocked Steve Trevor meet classic Wonder Woman villain Baroness Paula Von Gunther, wearing a nice if evil-looking dress and riding a dead horse in her position as "Commander of the First Tenebrae Battalion", while Mera and Supergirl deal with an aquatic version of the same in the Thames. The middle passage of the story deals with Stargirl's mother telling her of her real father in a sequence beautifully-illustrated by M.L. Sanapo and Juan Albarran, who illustrate the story in a rather lush, storybook style (and include a rather amazing looking version of Swamp Thing in its climax, in which the creatures of the woods attend to Stargirl's mother).

Laura Braga and Sandy Jarrell provide the rest of the art. 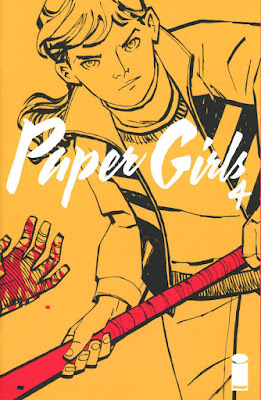 Paper Girls #4 (Image Comics) There's a really great four-page, 36-panel sequence in this issue of Brian K. Vaughan and Cliff Chiang's weirdo sci-fi thriller that illustrates just how labor-intensive comic book-making is. It's a completely silent sequence, featuring 36 carefully arranged and drawn panels, each with an incredible amount of detail, necessary to differentiate the panels from one another in time as they all show very similar subject matter–the same character engaged in the same activity–but it all takes somewhere between ten seconds and a minute to read, but must have taken Chiang forever to draw. It's in service of a pretty simple and straightforward joke, and it works, but I can't think of the last time I've encountered a passage of a comic book that so ably demonstrated the disconnect between the amount of work the artist puts into the page vs. the amount of time a reader spends with it.

Four issues in, and this is still a very intriguing series. If all it had going for it was Chiang's always great art and unexpected, even bizarre call-backs to my own youth–I'm 90% sure there's a reference to The Grand Prize Game from The Bozo The Clown show, which one of the characters mumbles deleriously about–I'd be into it. That it also features some sort of crazy, slowly unfolding plot about warring factions from the far future and pterosaurs is all bonus. 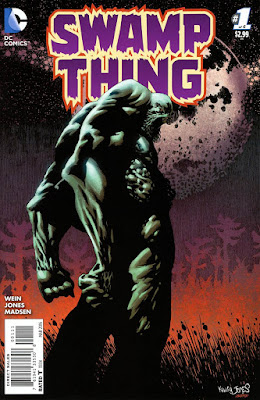 Swamp Thing #1 (DC) Forget Telos or Titans Hunt, this is the only Convergence spin-off really worthy of your attention, and it's not really a spin-off, it simply has the creative team of a Convergence tie-in miniseries doing an in-continuity story featuring the character from their tie-in. That's right, it's Swamp Thing co-creator Len Wein and best-possible-choice-to-draw-a-Pre-Alan Moore-style-Swamp Thing-that-isn't-Bernie Wrightson, Kelley "My Favorite Superhero Artist" Jones.

I didn't pay much attention to the post-Flashpoint, New 52 Swamp Thing revival (I read the "Rotworld" story arc, and that's just about all, really), so I'm not up-to-date with the character, really, but it turns out one need not be at all for this six-issue series: Swampy's origin is recounted in four of the six panels on page two. Swamp Thing is a thing from the swamp, wandering around communing with nature and trash-talking alligators that try to eat him ("Really...? Are you...serious...?") until he gets some visitors. The first is The Phantom Stranger, whose role here seems to be his original role in the DCU, ignoring whatever the hell was going on in his last series and Trinity of Sin (love the way Jones turns his cape into a billowing, storm cloud of cloth, and gives him spooky pin-points of white in shadow eyes). The next are a pair of parents, who want the local hero to investigate the tragic fate of their son, who has been turned into a zombie at the swamp adjacent college, and is currently engaged in murdering his former classmates and the professor he holds responsible.

Swamp Thing agrees to look into it.

Wein's narration is particularly, predictably purple, which is to be expected, and his plotting decidedly old school, which may or may not be a welcome change of pace for certain Swamp Thing fans. Personally, I appreciate the fact that he can go in the opposite direction of Alan Moore and Moore's successors take on the character, eschewing all the god-like qualities of the character and focus instead on Swamp Thing as simply a sort of swamp-based, monster superhero.

The reason I picked this up, of course, is that it was drawn by Kelley Jones. I mean, damn, just look at that cover! And not just the striking, twisted figure, which looks taller and more tree-like than the ape-like mass of muscles he draws within, but the moon, the sky, the forest in the background...I love Jones' backgrounds, particularly in natural settings like this. There's so much careful artifice to every panel. In an era when it's more common than not for many Big Two artists to simply drop in photos of the moon or cityscapes in their backgrounds, it's so goddam refreshing to see someone drawing the moon, and dozens of trees, and scores of blades of grass and so on.

This is a splash page, featuring Swampy's adversary for the issue– 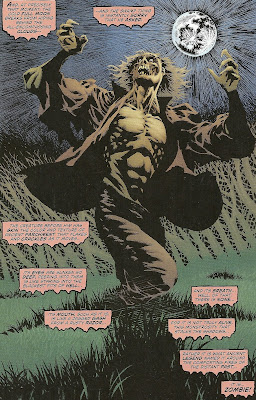 –but it's representative of even the smaller panels. There are few that don't have a background busy with trees and vines. Jones is the perfect Swamp Thing artist not simply because he was so influenced by Swamp Thing's co-creator Bernie Wrightson, nor because he's so great at drawing monsters, but because he draws the living hell out of the swamp.

This is probably my favorite sequence, though. The zombie-like creature is in the middle of his latest attack, when Swamp Thing makes his entrance, growing out of the ground and addressing his quarry before he's even got a fully-formed mouth, let alone a face: 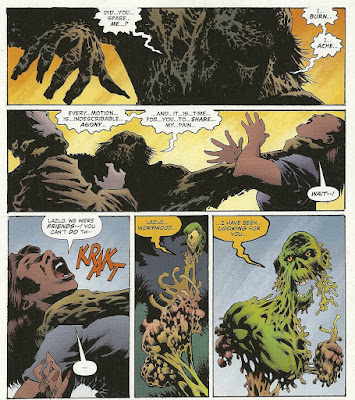 I'm really looking forward to five more months of Kelley Jones comics at DC. It helps salve the sting of the knowledge that Section Eight has ended, and I won't be seeing John McCrea art in a DC Comic on a monthly basis any more.
Posted by Caleb at 10:50 PM

>I didn't pay much attention to the post-Flashpoint
I suggest reading Charles Soule's run. It's the best "avatar of the green" swamp thing since Millar.

I was going to say the same thing as Jacek. Snyder's run is ok, but Soule's is excellent.