Superman: American Alien #3: The comic where Clark Kent drinks a lot and has sex with The Cheetah 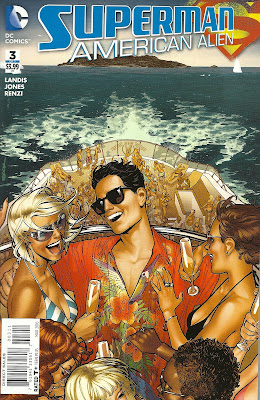 In October of 2014, DC published Batgirl #35, in which the writing team of Cameron Stewart and Brenden Fletcher and the art team of Babs Tarr and Stewart pretty much completely reinvented the character, giving her a new costume, a new setting, a new supporting cast and, more noticeably (and importantly), giving her book a new tone, new aesthetic and a new, new-reader-friendly posture. Depending on how generous one wanted to be towards the creators of the book's previous 34 issues, the new take either made the book much better than it had been, or made it readable for the first time.

I was therefore slightly surprised and rather chagrined to find that the one aspect of the new direction that some fans focused on was this: During a house party, Barbara Gordon drank a lot of alcohol and made-out with a boy...which she forgot doing, because of the amount of alcohol she drank. To summarize, those who noted the scene at all were pretty unhappy about it, as they felt it depicted Barbara as a woman of low morals and bad judgement. It's just not the sort of a thing a hero should do, they contended.

In this issue of American Alien, the Max Landis-written limited series about a pre-Superman Clark Kent, the title character, who is, like Barbara in Batgirl, only in his early twenties, drinks a lot of alcohol and than makes-out with a girl...actually, he likely goes a lot farther, as they wake up naked next to a bed at one point (Barbara's friends put her to bed and her boy on the couch). 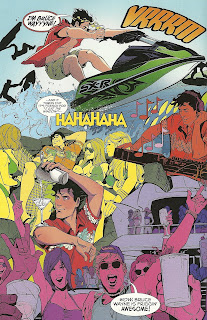 If they didn't, well, that would be indicative of the fact that maybe there's a double-standard by which we judge the behavior of young men and young women, and a woman who engages in excessive drinking and romantic activity with someone she just met is judged to be a "slut," while a young man who does the same is dismissed with some platitude along the lines of "Boys will be boys."

Although maybe Superman engaged in such activity will be regarded by many as less egregious than Batgirl doing the same, as American Alien is now quite certainly meant to be an out-of-continuity, un-labeled Elseworlds story instead of part of DC canon, whereas Batgirl #35 featured the "real" Batgirl in the "real" DC Universe.

Due to the lack of an Elsweorlds label or old-school indication that it's an "Imaginary Story," American Alien's precise place in DC canon/continuity has been vague, a vagueness helped along by the fact that DC's September 2011 "New 52" continuity reboot left most of Clark Kent's pre-Superman history unknown. Since his formative years in Smallville were now mostly a blank slate, it seemed reasonable that Landis and his artistic collaborators were here filling in all those blanks. With this issue, though, it's rather abundantly clear that this is not set in the "real" DC Universe.

Why do I say that?

Well, for starters "Dibny" seems to be Sue Dibny's maiden name rather than her married name. One of the young, rich revelers on Bruce Wayne's yacht, the setting for this issue, she is introduced by Ollie Queen as "Sue Dibny." It's possible she was married at this point–in the next panel, Clark is introduced to "Vic Szasz and his wife"–although she would have had to have been married extremely young, and her husband Ralph Dibny is nowhere to be seen, nor is he even mentioned (The party is to celebrat Bruce Wayne's 21st birthday, so presumably Sue is somewhere near 21 at the time this story takes place). I haven't been reading Secret Six after the first few issues, where the New 52 Dibnys have been introduced, so I'm afraid I'm not up on their marital history in the current DC continuity. But, for the record, Sue's maiden name was Dearbon.

That could have just been a mistake, albeit an egregious one, on the part of the young, new-to-comics writer and/or his editors (There's little point in including a character in a minor-approaching-cameo role simply as a sort of inside joke/Easter egg, only to blow it so that the folks the reference is pointed at will see your mistake*).

There's a more dramatic indication that this takes place in some American Alien-iverse instead of the regular New 52-iverse on the story's last page. That's where we see young Bruce Wayne training under the tutelage of Ra's al Ghul...as he did in Batman Begins, but not in the DCU, pre- or post-Flashpoint.

In this issue, beautifully illustrated by Joelle Jones (for the last few months, this has been by far the best-looking of the Superman books), young Clark Kent wins a Caribbean vacation, but the little two-seater plane he's in crash lands in the water on the way there. Clark and the pilot are fished out of the water by a passing yacht, where everyone assumes that he is the yacht's owner, arriving in spectacular fashion to his own birthday party: Bruce Wayne.

The fact that Bruce Wayne and Clark Kent look nearly identical is something that was often played up back in the day, which allowed the pair to pose as one another when necessary to fake out crooks or maintain secret identities when they were occasionally endangered. It's not that weird to see it used here, particularly since Landis takes care to note that all of of Bruce's "friends" on the yacht barely know him, and that Wayne never attends his own birthday parties. Also, they're all pretty wasted.

The only one to see that Clark is definitely not Bruce is Barbara Minerva–who will of course eventually become Wonder Woman's archenemy The Cheetah–who rescues Clark from a throng of people. She convinces him to play Bruce and have fun for the day, which he does, with gusto.

They share a quiet conversation and some champagne together and then, well, this happens.... 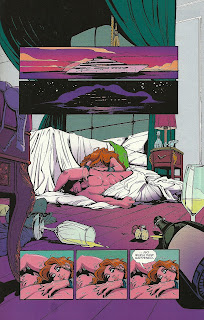 There's no reason to assume they definitely had sex together, but the implication is certainly there (and there's no moment, as there was in Batgirl, where a bit of dialogue is used to make it clear that they definitely did not).

After another tender, quiet conversation, Clark is definitely totally wasted, but it turns out that it's not the alcohol so much as a nerurotoxin placed in his champagne glass by Deathstroke, The Terminator, hired by Carmine Falcone to murder Bruce Wayne.
The ensuing fight, as you can imagine, doesn't go very well for 'Stroke: 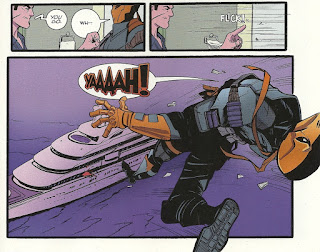 Clark and Barbara go their separate ways for...well, vague reasons. Mostly because as weird as it is to have the future Superman hook up with the future Cheetah, it would be weirder still if they had a real relationship, I suppose.

They part with Clark saying "Maybe I'll see you again some day," and, after he's walked away, Barbara saying "...God, I hope so."

And she does!
Although that's in The New 52 continuity, which, as I said, appears to be a different continuitiverse than that of the American Alien-iverse.

After all, it's pretty hard to imagine the "real" Superman, from any of the several continuity rejiggerings that the the DC Universe has gone through since its creation/solidification, behaving like this. Although, if it were, how crazy would it be if Superman lost his virginity** to the woman who would grow up to be his future girlfriend's archenemy...?

As with the previous issue, there's a one-page back-up story here, written by Landis and drawn by Mark Buckingham. Entitled "The Real Question," it's a pretty great little Mr. Mxyzptlk story about the nature of reality as it pertains to comic book characters (or fictional characters, or even ideas) and their relationship to their readers. It could basically be a story involving any comic book character, but Mxyzptlk's rather unique background as a Fifth Dimensional being dwelling a on a higher plane than the readers (and two planes higher than comics characters) makes him particularly well-suited for this sort of meta-commentary, which, at just nine panels, is short enough to never get tedious. Given it's brevity, this ought to be a good story for DC to tuck away for use in any future The Greatest Mr. Mxyzptlk Stories Ever Told-type collections.

*It's particularly strange given that Landis has Zsasz referencing making a bet, as his original origin story involved his gambling problem, and the fact that a minor character from an obscure comic gets name-dropped, in the form of Bobby Milestone from Silverblade.

**Unless he and Lana Lang had sex somewhere between #2 and #3 of this series; in the opening scene, Pete Ross mentions that the vacation could be just what Clark needs after, "y'know, after the whole thing with Lana."
Posted by Caleb at 11:36 AM