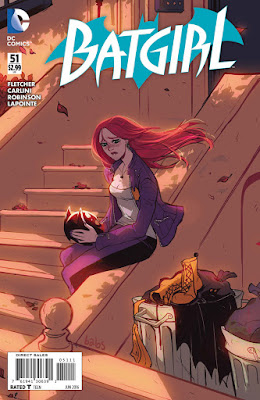 Batgirl #51 (DC Comics) Last issue certainly read like the last issue of Brenden Fletcher, Cameron Stewart and Babs Tarr's run on Batgirl, if not the end of the book itself. That issue capped off a creatively healthy run in which Barbara Gordon reinvented herself as Batgirl and her place in Gotham City, gradually making more and more friends and allies and, in the last issue, founding a company with her civilian friends and what seemed to be a superhero team with many of her female, crime-fighting peers.

So in this issue, the penultimate one before DC cancels and relaunches the title with a new creative team and new direction, Fletcher and a handful of guest artists essentially start unravelling that status quo that was so gradually built to, apparently prepping the character and book for the Hope Larson and Rafael Albuquerque team. Spoiler, Bluebird and Operator fight crime in Gotham ("Are these two young women the new Batman and Robin of Burnside?" a reporter asks, covering their exploits, "This reporter likes to think so"*), Black Canary and Vixen fight crime overseas, Alysia and Frankie continue to run Gordon CLean Energy and Luke continue to wait in the (bat) wings, while Barbara seems overwhelmed and gradually withdrawing from everything.

By the end of the issue, she's taking a break from the company (remember, founded just last issue), taking a break from Luke and planning on leaving town for a while. But first, she has to deal with the menace of terrorist organization Gladius, practically the only villains from the Fletcher/Stewart/Tarr run that weren't involved in the last issue (They're from Batgirl Annual #3, the issue in which Batgirl teamed up with, like, everyone, chapter by chapter).

So this is certainly tied in with the run it ends, but it can't help but feel very sudden. I'm glad Fletcher and DC are giving him a few issues to reset things a bit, rather than having Larson come in and have the option of ignoring or radically undoing what came before, but there's still a degree of narrative whiplash involved here. And that's despite Fletcher's efforts to cushion it.

Also, Olive and Maps of Gotham Academy appear, as it looks like the big showdown with Gladius in the next issue will be on the grounds of the school. It's kind of interesting how Fletcher has carved out this little corner of the DCU for himself and his collaborators, really, as we'll see in this week's Black Canary as well.

The artwork in this issue is by the solicited Eleonora Carlini, plus Minkyu Jung and Roger Robinson. It's all pretty great, and actually transitions about as seamlessly as possible (thanks in large part to a single colorist, Serge LaPointe), with the changes in team only really becoming evident on re-read or flip-through, rather than during an initial reading.

Still one more issue to go, and I already miss the book... 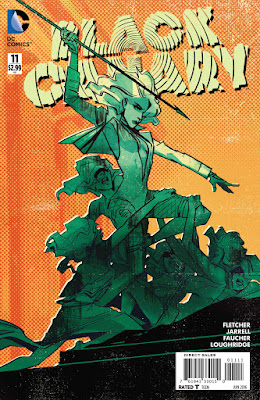 Black Canary #11 (DC) Meanwhile, Fletcher's less successful book is also reaching its conclusion, as he and guest artist Sandy Jarrell (inked on the last few pages by Wayne Faucher) pit Black Canary (the superhero) against an immortal demon disguised as a performance artist who has Black Canary (the band) in his thrall.

The above sentence details the essential problem with this book; as the first story arc deal with Black Canary fighting aliens, this one has her fighting a demon, and that doesn't fit too comfortably in a book starring a street-level, martial artist/vigilante, despite Fletcher and his collaborators' efforts to reinvent the character (as with Batman or Green Arrow, the sorts of conflicts Canary faces as part of a Justice League story don't work as well in her own, Justice League-less book).

The other problem, of course, is that their reinvention is laid atop the New 52 reinvention of the character, and those changes are unfamiliar enough to me that whenever they rear their head I just have to accept them as new information, despite the fact that her new origins are meant to be understood by the reader.

As with the aliens from the first arc, however, this demon at least has a musical and sonic connection, and Fletcher has tied martial arts into the mix with this arc, so it all feels a lot more cohesive.

Jarrell's art is great, even though it's not what we were promised at the outset–that is, Annie Wu–and Lee Loughridge continues to define the look of the book through color, which has kinda sorta taken the place of sound in the narrative, as you can't really "hear" a comic book (despite Doug Moench's best efforts), even one in which sound is as important as it is here.

Once again, Batgirl makes an appearance, this time out-of-costume and long-distance, essentially co-Oracling alongside Operator. Vixen reappears as well, offering yet another reminder how awesome a Birds of Prey book spinning out of Batgirl and Black Canary could have been. 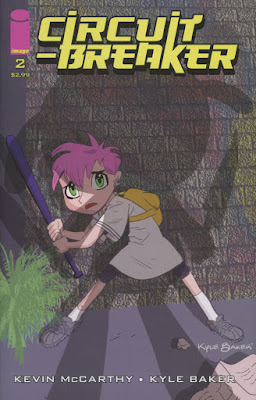 Circuit Breaker #2 (Image Comics) Kyle Baker's allusion-filled artwork in this book is simply a joy to read, and re-read. In fact, you could probably read issues of this series sans dialogue and, while the narrative obviously wouldn't be entirely clear, you would at least see some astounding cartooning and crystal clear cartooning, while also getting to pick apart the references in the art. There's one sequence where our Astro Boy-inspired heroine engages a Doraemon-like** character in which the fleeing crowd has characters resembling Baker's on-the-fly cover versions of Charles Schulz's Peanuts characters, Yoshito Usui's Crayon Shin-chan and, if I'm not mistaken, maybe even Shigeru Mizuki's Nezumi Otoko.

The plot is easy to describe, as the Japan of the future's robots rise up to face robot-racism and the sophisticated, robot-fighting robot Chiren (the "circuit breaker" of the title–get it?), tries to defend humanity and maybe somehow broker peace between the two factions, but as for its meaning...? Well, it's pretty complicated and nebulous, and analysis is better-suited to a review of a trade than single issues, lest I keep repeating myself.

Suffice it to say that writer Kevin McCarthy has crafted an enjoyable action comic narrative out of big ideas and media criticism, and Baker's cartooning is not-to-be missed.

Anyone who has–or has had–any level of engagement with manga and anime and/or anyone who loves looking at drawings should be reading Circuit Breaker. 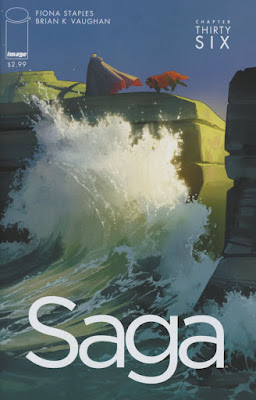 Saga #36 (Image) This is apparently the last issue before the book goes on another regularly scheduled hiatus, and it goes out with quite a cliff-hanger. One of the most appealing things about this book–well, maybe I should say one of "the many" rather than one of "the most"–is how it continues to surprise. One would think that, after reading 35-issues of this book, in which anything can happen, including the sorts of things that one would never expect in a Big Two franchise book or even a creator-owned Image book, where certain kinds of surprises become inevitable (see: The Walking Dead; spoiler: they all die), it would be impossible for Brian K. Vaughan to surprise readers.

That is most assuredly not the case. There was a sudden act of violence in the middle of this that genuinely shocked me. Not because of how violent it was–sudden violence happens pretty frequently in this book, which has killed off several awesome characters–but because of who committed it. And then there's the last page, which kind of brings the book full circle while simultaneously prepping to launch it in a new direction.

This issue also features the genuinely terrifying Saga Costume Contest results (the dog dressed as Ghus is the only participant I wouldn't be terrified to see in my apartment, or on the street, or anywhere that wasn't a comics convention, really) and what I hope is a promise of the return of Lying Cat. The ghost/hallucination of The Brand tells her brother the fat The Will, "Go ask the one chick who calls you on your bullshit."

Huh. Is that what happens when one is without a Lying Cat...? They become addicted to drugs, gain a 150 pounds, get all murder-y and hallucinate constantly...? Is that the problem with our world, that we don't all have Lying Cats keeping us honest with ourselves all the time...?


*I know DC already announced a new Birds of Prey book by a new creative team with no links to the pages of Batgirl and that Spoiler will be appearing regularly in Detective Comics. I still think I'd prefer a Bluebird and Spoiler book like the one the Gotham reporter seemed to suggest than seeing Spoiler in 'Tec, which will, at best, be poorly drawn. Certainly when compared to Batgirl.

**Doraemon is mentioned by name, too. Chiren's friend Michiko calls the Doraemon-inspired character Kuchi-Kun "such a bite of Doraemon," and part of "the norotrious bosozoku club Super-Deformed" wears a giant Doraemon head.
Posted by Caleb at 8:48 AM