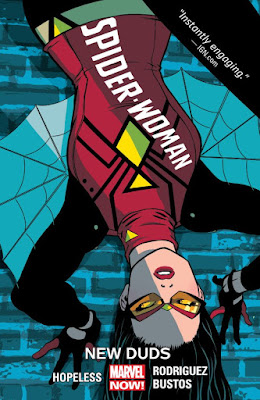 I feel like I'm always complaining about how overly eager Marvel is to relaunch and re-number their books for the slightest of reasons, so that following a particular creative team's run on a particular character can get downright confusing for the seasoned comics reader, let alone a relative newcomer.

For example, if one wanted to read writer Mark Waid's run on Daredevil, one would read the various volumes not in strict numerical order, but rather in this order: 1, 2, 3, 4, 5, 6, 7, 1, 2, 3 and 4. Unbeatable Squirrel Girl, Spider-Gwen and Howard The Duck all re-launched with new #1s directly after Secret Wars, despite a few of them only being a few issues into their runs, the collections of their pre-Secret Wars issues bearing 0s on their spines rather than 1s.

There are several different variations of this nonsense, including the changing of the title of a comic during a relaunch, as when writer Al Ewing's story about the Luke Cage-lead team of street-level Avengers that ran through several collections of Mighty Avengers continued into Captain America and The Mighty Avengers Vol. 1, or when Jason Aaron and Russell Dauterman's story about the mysterious new female Thor jumped from the pages of Thor to the re-launched and re-numbered Mighty Thor.

Does that even make any sense at all...? Not the decisions on Marvel's part (I know those don't), but my explanation of them...?

Let's review. In late 2014, Marvel decided to give Spider-Woman Jessica Drew her own ongoing monthly title, launching it as part of the then-ongoing Spider-Man franchise event story, "Spider-Verse." Dennis Hopeless was the writer, and Greg Land was the pencil artist, so, regardless of how well it was written, it was going to be a piece of eye-hurting, soul-saddening garbage.
One of the six covers for that first issue was by the legendary Milo Manara, and his posing of the character crawling over a rooftop set off something of a firestorm. Spider-Woman was, of course, wearing the same costume she had been wearing since her 1977 debut, but Manara's rendering of it really called attention to the fact that the costume was basically just red body-paint. Which is how it's been consistently drawn since at least the early '00s resurgence of the character in New Avengers, but this seemed to be a perfect storm of factors leading to an outcry: The artist, the fact that it was Spider-Woman's own book, that it was the first issue, the fact that Marvel had so few female-lead books at the time, that social media allowed for conversations like this to start and snowball instantaneously, the death-by-a-thousand-cuts aspect of representation of women in superhero comics.
(Personally, I didn't have any strong feeling about the cover. It was hardly the grossest cover Marvel has ever published, and it was one of a half-dozen covers they attached to that particular issue, at least four of which were dumb: A typically terrible Land cover, one featuring Rocket Raccoon and Groot for no reason other than movies and a blank cover. What annoyed me most about the Manara cover was that the artist apparently recycled an old image with an explicitly adult origin for the foundation of it...and the fact that more people seemed more upset about this particular Spider-Woman image than, say, any one that David Finch drew for New Avengers or that weird-ass hentai tentacle rape cover Marvel published).
The Hopeless/Land "Spider-Verse" tie-in continued into the next three issues.

And then came Spider-Woman #5, in which Hopeless was joined by pencil artist Javier Rodriguez and inker Alvaro Lopez. In it, Jessica Drew was given her first costume redesign in 38 years, this one a very smart, very cool-looking "realistic" design that kept the essential elements (color scheme, spider sigil, web wings) but also looked to be made of a fabric other than paint and/or spandex. It was designed by Kris Anka, who seemed to take at least a little inspiration from Batgirl Barbara Gordon's recent redesign over at the Distinguished Competition.
And it read exactly like the first issue of a brand-new series, with absolutely no reference at all to the preceding four-issue "Spider-Verse" arc.

Jessica has finally quit the Avengers–New, adjective-less and Secret–and is hoping to reinvent herself as an unaffiliated crimefighter who helps regular people. She does this basically by tooling around New York City on her motorcycle in her new jacket and sunglasses which, when she sees trouble, she can change with a few quick movements into her work clothes.

Her problem, it turns out, is that she is spectacularly bad at this sort of crime-fighting, perhaps as a result of being rusty, having spent so many years dealing with Avengers-level problems like Ultrons and Super-Adaptoids and big cosmic threats like Skrull infiltrations and whatever was going on in Infinity exactly. After her latest screw-up, she ends up in jail (Hey, that's where Chip Zdarsky and Joe Quinones' Howard The Duck started his new series!) and was bailed out by white, Marvel Comics Universe, Daily Bugle reporter Ben Urich (not black, Marvel Cinematic Universe, Daily Bulletin reporter Ben Urich, God rest his soul).

Urich wants her super-help cracking a strange story he's been investigating: The wives and girlfriends of various, very low-level Spider-Man villains have all gone missing lately, and Urich thinks they're connected. Spider-Woman naturally dismisses him, womansplaining to him that if the significant other of a supervillain suddenly goes missing, chances are she's running from The Kangaroo or Bigwheel or whoever, and doesn't want to be found.

She changes her mind after a chance encounter with The Porcupine, who was in the middle of pulling a bank job. It's then she learns that the villains' significant others (and, in some cases, their kids) have all been kidnapped, and the kidnapper is forcing them to pull jobs over and over in order to pay ransom.

Soon, Spider-Woman, Ben Urich and The Porcupine are on the case!

After some clever investigation, they get to the bottom of it, and it is a rather weird, rather clever, even inspired set-up, one I'm sure I've never seen in a superhero comic before (which is really what the writers of superhero comics should strive for; presenting readers with things they've not seen before). It turns out both Urich and Spider-Woman had hunches that were partly correct, and while there is a fight at the end, it's refreshing that violence didn't provide the answer to the the conflict. Rather, compromise, understanding and a bit of trust did. What a fun story.

The final two issues of the series have Spider-Woman and her two new sideckicks taking their show on the road, righting (weird) wrongs in a montage during a cross-country road trip, until Porcupine takes them too a "historic Dodge City," where they get involved with some particularly dangerous weirdness, including mind-controlled citizenry and, um, Hulk cows.

Secret Wars intrudes in the denouement, which at least provides this Spider-Woman series an odd kind of bookend. It launched out of one event, which ate the first four issues of the series, and it ended with the character reluctantly joining Black Widow to go participate in another event, which mandated the cancellation of Spider-Woman (and, um, everything else Marvel published).

While Hopeless' art is smart and sharp, and he deftly handles creative plotting and sharp dialogue while finding that perfect sweet spot between serious and silly that can make the Marvel comics that want to be so damn fun, as they mine the setting's deep bench of weird characters for deadpan absurdity, it's Rodriguez's art that sells it all.

I can't imagine the whiplash that Land fans must have had--are their Land fans? I mean, aside from whoever keeps hiring him to draw Marvel comics, of course--had when they picked up issue #5. Rodriguez is a comics artist's comics artist. His designs are strong, and he manages to make Spider-Man's many sub-Shocker villains look cool, silly and accurate all at once, he's a superb actor and his page lay-outs are relentlessly clever, without ever letting that cleverness overpower the story that he and Spencer are telling.

Natacha Bustos draws the final issue in the collection, and she acquits herself quit nicely. Her art is obviously different, but not so obviously that you'd notice during a flip-through, or likely finding it impacting your reading experience in anyway. Bustos either draws a heck of a lot like Rodriguez, or at least carefully calibrated her style to better resemble that of Rodriguez.

It feels a little weird to recommend Vol. 2 of a series, but that's Marvel at the moment. Read Spider-Woman Vol. 2: New Duds.

I imagine the next Spider-Woman Vol. 1, which collects the post-Secret Wars relaunch by the same creative team, will be pretty good too, but I haven't read any of it yet.
Posted by Caleb at 7:22 PM

I actually bought this trade not too long ago, and was overjoyed to see that you reviewed [and enjoyed it] as well.

Yes, it also irks me that I will have Vol. 1 of Spider-Woman following Vol. 2, as I have absolutely no interest in reading the first few issues given that Greg Land had a hand in creating them. That said, I'm very much looking forward to the next collection in which Jessica Drew is pregnant. I'm not familiar to Hopeless' work outside of this, but he appears to understand how to write female characters exceptionally well.

Re: Spider-Woman's new costume mimicking aspects of the new Batgirl of Burnside, apparently Anka had been designing this before and separate from Barbara Gordon's new threads. It just so happened that they both struck upon that particular style of jacket, but neither was influenced by the other. Just parallel evolution/design, I guess.