I'm going to try and be all timely with a post today about that thing everyone was talking about. 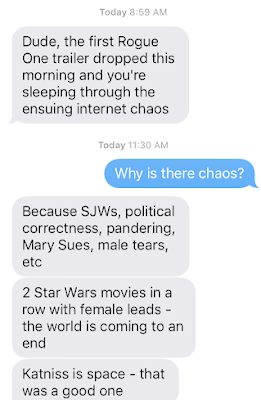 That's how I woke up this morning. I have since watched the trailer a time or four. Would you like to watch it again, together? Okay, let's!

0:14-0:17 Hey, it's that stupid droid that is literally just a kid or a little person shoved in a square garbage can! Why would they fill the background of the film one of the goofiest imagineable droids in the Star Wars-iverse? I guess that's some commitment to Star Wars history fidelity. I bet there is a very long, very boring Wookiepedia article about those droids. No, I was wrong. There is an article about those droids on Wookiepedia, and it is boring, but it is also very, very short.

0:23 Hey, Felicity Jones (that's who that is, right?) looks an awful lot like a brown-haired Kristen Bell. Like the Kristen Bell who was in Fanboys. Hmm, Carrie Fiscer's Princess Leia, Natalie Portman's Padme Amidala, Daisy Ridley's Rey and now Jones' Whoever; that's a lot of brunette protagonists. Are their no blondes or gingers in space?

0:55 Seriously, if you had told me that was Kristen Bell, I would believe you.

1:02 Hey, who is the older-looking gentleman in the light gray uniform with the cape? Is that supposed to be young Grand Moff Tarkin...? Oh man, I hope so! That would mean I would get to say "Mon Mothma" and "Grand Moff Tarkin" over and over again through the end of the year! Those are two of my favorite things from Star Wars to say out loud!

1:06 Forest Whittaker? What are you doing in Star Wars? I did not expect to see you here!

1:12-1:13 And gray ones? Or green ones? I hope there's a whole rainbow of stormtroopers in the Saga by the time they quit making Star Wars movies, which I suppose will be never.

1:15 Hey, Donnie Yen doing kung fu. You know, if I cast Donnie Yen in a movie, I would want him to be doing kung fun, I suppose. I don't know about Space Donnie Yen, though. Is it going to be weird if the only guy doing kung fu in space is the Asian guy, although I guess he's not really Asian in this, since there's no Asia...?

1:18 Someone in a robe, kneeling in front of a big smokey tube, while Emperor Palpatine's red guards flank the tube. Who's that supposed to be, I wonder? There's no helmet, so obviously not Vader. An Inquisitor? A new Sith-like character...?

1:28-1:29 OMG, the rebellious rebel lady is wearing a black costume that looks like one worn by TIE-fighter pilots! Has she turned to the Dark Side, or at least switched sides, as Whitaker's lines imply? Wait, is that Whitaker doing the voice over? I have no idea.

1:36 Rogue One: A Star Wars Story...? That's a dumb name. I assumed these "anthology" or between-Roman numeral-ed movies were going to be called Star Wars: Rogue One or Star Wars: Asajj Ventress or whatever.
Posted by Caleb at 8:34 PM