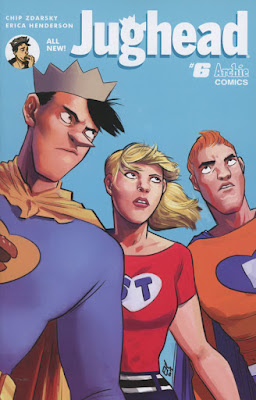 Jughead #6 (Archie Comics) This is it! The conclusion of Chip Zdarsky and Erica Henderson's six-issue Jughead epic, which is every bit as good as Mark Waid and company's reinvention of Riverdale in the pages of Archie, except it is even more better, in that it is funnier.

Jughead and his allies (well, friends) have their final showdown against suspicious new principal Stanger, and all is re-set back to the status quo by the final page, but not before many jokes are told.

Perhaps the best of them is that Dilton demonstrates his "greatest ability," and no, it isn't anything the least bit science-y, as you might expect (Zdarsky offers an editorial box underscoring his own gag, noting that "This is now canon x infinity." The power of a writer!).

Henderson's rendering of a slow clap in six-panels is pretty awesome too, though.

If you haven't been reading Jughead monthly–and you really should have been–don't miss the trade collection of these six issues. It's every bit as fun and funny as, say, Howard The Duck (which Zdarsky writes) or The Unbeatable Squirrel Girl (which Henderson draws). 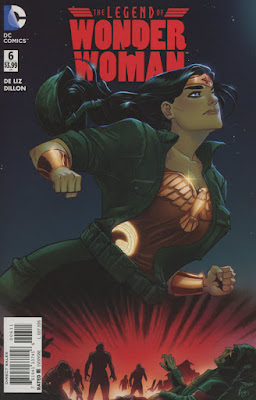 The Legend of Wonder Woman #6 (DC Comics) "Why is Wonder Woman so difficult to figure out?!" a frustrated Etta Candy shouts aloud, speaking for pretty much everyone who has tried to make a Wonder Woman comic since her creator William Moulton Marston passed away.

Etta, who has assigner herself the task of coming up with a costume for her friend Diana, who has just done her first superheroics in Man's World and has been dubbed Wonder Woman, eventually figures it out in a moment of inspiration. Writer/artist Renae De Liz has obviously figured it out as well. If she has had any difficulty figuring out Wonder Woman, it certainly isn't evident in the comic that has resulted.

Diana and Etta are now on the frontlines in France, and when Diana gets a lead on The Duke of Deception, she puts her mother's gifts on, tapping in to their attendant powers to confront The Duke and his undead Nazi soldiers.

The previous issue included mentions of characters from the wider DC Universe–Perry White, John and Martha Kent, Plastic Man–and here we get another, stronger one that puts Wonder Woman squarely in a shared universe of superheroes, even if it's simply a single line of dialogue that does so.

When Diana flies back from her battle to find a concerned Etta waiting for her, Etta convinces her that she's "a superhero...like those people in that Justice Society of America I keep hearing about!"

While I won't go so far as to say De Liz's Wonder Woman origin story has been perfect, it's probably just about tied with Grant Morrison and Yanick Paquette's Earth One original graphic novel for the best post-Marston Wonder Woman comic. I have no idea if De Liz wants to do more Wonder Woman comics for DC in the future, and if she does, if she will want to just continue telling tales of Golden Age Wonder Woman like this, but if she decided to follow up The Legend of Wonder Woman with Wonder Woman and The Justice Society of America, well, you wouldn't hear me complaining about it. 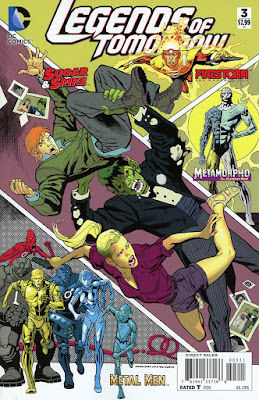 Legends of Tomorrow #3 (DC) Gerry Conway and Eduardo Pansica's Firestorm feature and Aaron Lopresti's Metamorpho feature essentially just keep on keeping on, with no real new or terribly interesting developments. Keith Giffen and Bilquis Evely's Sugar & Spike is this weird anthology book's best feature, visually as well as in terms of story, and this month's installment is no exception.

Of course, it likely benefits from the fact that Giffen has reinvented the baby stars of the old gag comics as private investigators whose clientele consists entirely of members of the Justice League, so after working for Batman and Superman in the first two installments, it is now Wonder Woman's turn. She wants them to investigate the monster she almost married in the Silver Age, who has suddenly resurfaced and is set to potentially embarrass her. It's probably the weakest of the three Sugar & Spike strips to date, as it revolves almost entirely around the fact that Sugar is a terrible person, and her punching bag Spike gets more abuse than usual (including apparently getting kicked in the genitals by his evil partner), and spends a little too much of the story ogling Wonder Woman.

Finally, there's Len Wein, Yildiray Cinar and Trevor Scott's Metal Men feature, which includes mechanical guest-stars Robotman and Red Tornado. Once the Metal Men defeat Tornado, we get to see his new, New 52 costume, and it might actually be an improvement over his past costumes. He's more of a black tornado than a red one, with a black cape and a black pair of pants, with a red head, torso and boots, and some yellow highlights. I kinda dig it, and it's not often that one finds a New 52 redesign that actually improves upon a pre-Flashpoint design.

For a good example, check out the cover, where the great Kevin Nowlan draws all these classic DC characters in their current incarnations, and the result is mainly to make one wish he was drawing them in their "real" forms. 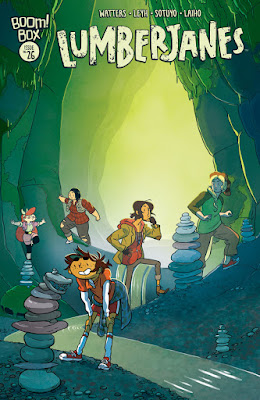 Lumberjanes #26 (Boom Studios) Scouting Lad Barney and Lumberjane Hes join our protagonists from Roanoke Cabin as they set off to rescue the Lumberjane leadership from the clutches of a gigantic bird. Some of those kittens with the magical super-powers that filled the last issue come in particularly handy in this issue. It ends with a rather typical genre comic cliffhanger, but reading between the lines of some of the dialogue, I think the book is headed towards a particularly huge status quo change in the very near future, which will have little to nothing to do with the monster bird. 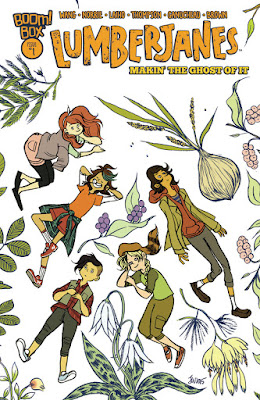 Lumberjanes: Makin' The Ghost of It 2016 Special #1 (Boom) First of all, fuck this comic. Boom Studios charged $7.99 for the one-shot special, which I gladly paid, assuming it was at least a double-sized issue. There are only a couple of $3.99 comics I buy regularly, and Lumberjanes is one of them, so if this special was double-sized, and was being sold for the price of two copies of Lumberjanes, well, it's not ideal pricing, but it makes a certain amount of sense. But when the book ended way too fast, I went back and counted pages and guess what? It is not double-sized! It is only 40 pages long! So it is only 18-pages longer than your average, 22-page issue of Lumberjanes, and they still charged $4 extra dollars for it! That's just...evil.

Breaking out the calculator, the Lumberjanes monthly costs an already-too-damn-much 18 cents-per-page, while the Special costs a wallet-wrecking 20 cents-per-page. I sure hope this book is bought primarily by grown-ups to read themselves or to give to little kids, and not by little kids spending their own allowance or anything...

There are two stories in this issue, one a somewhat over-sized, 32-page story written by Jen Wang, who provides one of the book's two covers (the one above) and drawn by Christine Norrie. It's a well-written and rather beautifully-drawn, but ultimately trivial story that could have fairly easily slotted into the regular monthly, rather than earning a special. It's published size is, obviously, too big for one issue and too short for two issues, but it could rather easily have been trimmed or lengthened accordingly. It opens with a full-page splash, and the individual pages are lighter on panels than the average Lumberjanes story; many pages have just 2-4 panels on them, and the story sequence at the heart of Wang's tale could easily be made longer, as it seems unfortunately truncated (it also rather awkwardly and obviously avoids using the words "murder" or "cannibalism," despite being about a cannibalistic murderer).

It's well written and wonderfully drawn, but there's nothing to it really, not even a really good gag.

The eight-page back-up, written by Kelly Thompson and drawn by Savanna Ganucheau has that, at least. Ripley totally saves Jen's life by answering the riddle of a sphinx and earning a wish, in a fun, fleet story that Ripley herself tells to the rest of the Roanoke cabin. Despite the lack of space, Thompson seems to capture the zaniness of the characters and concepts better than Wang.

The letters in this back-up, by a "Mad Rupert," are pretty cool. I generally dislike when comics characters get distinct styles of dialogue balloons, but I've never seen dialogue balloons like those given to the sphinx in this story.

All in all, it's a pretty okay extra serving of Lumberjanes, and it is interesting to see what different creators choose to do with the characters and concepts, but man, it's hard to say it's worth that crazy-high price tag...
Posted by Caleb at 9:25 PM