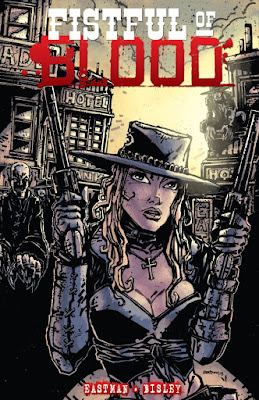 Kevin Eastman's relationship with IDW Productions would seem to be a rather fruitful one. In addition to allowing him to keep a hand on the rudder of their Teenage Mutant Ninja Turtles ongoing comic–though he is the "Eastman" of "Eastman and Laird's Teenage Mutant Ninja Turtles" fame, Nickelodeon has own the franchise for a while now–IDW also indulge Eastman's far less commercially promising projects, like Fistful of Blood.

They published the comic as a four-issue miniseries a few months back and then collected it into this 120-page trade paperback, but the back-story of the comic is a bit more convoluted. Eastman and his friend and one-time studio mate Simon Bisley originally created it for Heavy Metal magazine circa 2001, and it looks like it was previously collected in 2002. This version isn't that version, at least, not exactly. Eastman refers to it as a "re-mastered version" in the ample back matter included after the actual story, noting that he redrew every page (and colorist Tomi Varga turned the once black-and-white comic into the full-color version that fills these pages).

Even without knowing that, it's evident that Eastman and Bisley both had a great deal of creative input on the pages of this book, and while their precise working method isn't exactly defined, the results reminded me quite a bit of Eastman's early collaborations with Peter Laird, where they both seemed to have written, penciled and inked every panel together, and it was difficult to tell exactly who did what. This is a little like that, as there's a lot of Eastman and a lot of Bisley on almost every page and, interestingly, some pages look a lot like the work of Bisley. In the behind-the-scenes section, Eastman says that they discussed the book together, he did the lay-outs (many of which are included), Bisley did the pencils and then they both worked on finishing the pages together...and now, of course, they've been re-finished and colored.

It's an unusual kind of collaboration, really, more like the construction of rock music by a band than the normal, strict division of duties often associated with comics: It can be hard to tell where Eastman ends and Bisley begins, and, as a fan of either or both artists, it's a blast to try and pick out who drew which line, and who designed which background character throughout (Do note that the cover of the book, above, is clearly all Eastman).

As the title and the Western setting allude to, the comic was created as a deliberate reference to 1964
s A Fistful of Dollars. Eastman writes that it was mean to be a parody of the classic Eastwood Western, but its more of a high-concept riff, "with Zombies, Vampires and Aliens...long before they became all the rage." A quick couple of keystrokes confirms that this genre mash-up predates Platinum Studios' controversial Cowboys & Aliens comic book by a half-decade, and the resurgence of the zombie genre with 28 Days Later by a year. 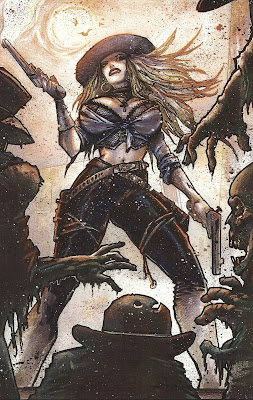 The basic plot construction is borrowed directly from A Fistful of Dollars. A woman with no name stumbles into town. She is comically well-endowed in the way that only a comic book character could be–and clearly designed and drawn by Bisley–and dressed only in a bra and underpants.* She is immediately set upon by one of the two local gangs, and dispatches them all pretty quickly. Later, she's attacked by a member of the rival gang, and kills him handily as well.

One gang is a bunch of zombies, the other a bunch of vampires, and they've turned an abandoned Western movie set into a literal tourist trap, where their human servant helps them lure visitors in with the promise of a Western theme experience, and then the two warring gangs of ghouls divide up the blood and flesh of their victims.

The woman with no name, the taciturn character sometimes called "Blondie," eventually agrees to help each gang dispatch the members of the other, but it all ends with a huge battle in which her true nature is revealed (Eastman's quote above spoils it; if you didn't catch it, let's just say she's a very strange stranger indeed) as is the real reason she wandered into this particular town in the first place. 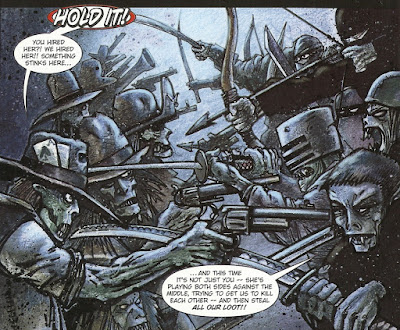 The relative slightness of the plot, and the fact that it is borrowed from a movie (which, of course, borrowed it from another movie) means how much fun a reader will have with the book likely revolves around how much one enjoys the work of the two artists. (Personally, I'm a big fan of both.) That, and, perhaps, how much affection one might have for horror creatures like these.

They are very Hollywood in their conception. The zombies walk and talk and are all-around sentient, and they're always all dressed up in cowboy style; they look a bit like Jonah Hex all of him was as ugly as the one half of his face. The vampires, by contrast, all look like variations of the title character from Nosferatu: Bald, big ears, eyes and fangs, billowing black robes, long skeletal fingers ending in claws. A few of them are more colorful, dressed in Asian exotica fashions and looking pretty bizarre. 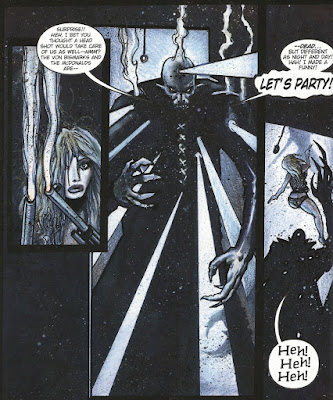 The designs are all fairly cartoonish, and bear Bisley's general aesthetic. Eastman shares his original designs for the characters, and it's amazing how different (and different for the better) they ended up, with the main character being the one with the least bit of redesign. That back-matter I keep referring to fills 32 pages of this collection, and there's plenty of commentary from Eastman, along with sketches, lay-outs, character designs, storyboards for a movie adaptation that was never made (at least, not yet) and so on. Apparently Eastman adapted it into a film script with a few friends (one of whom was comics writer Paul Jenkins), and came up with ideas for a pair of sequels based on For a Few Dollars More and The Good, The Bad, and The Ugly, which "will see the light of day...one day, either as a comic series or some other form."

I don't know about movies–this particular story is scant enough that it looks like the sort of narrative that could very easily be ruined by filmmakers trying to fix it**–but I'd be interested in seeing those ideas as comics. Particularly if Eastman could re-team with Bisley, because their collaboration is a large part of what made this book so much fun.

In fact, it's kind of hard to imagine this book without Bisley, as his style incorporates so much caricature into the cartooning that it keeps one from ever taking the proceedings too seriously. As high-concept as this might be, it's a rather low-brow form of high-concept, with meant to be laughed with. Despite the horror tropes, it's much more of a B-movie splatter-stick kind of affair than an actual work of horror meant to scare a reader. Under the pencils and pens of different artists, this could be anywhere from terrible to offensive. Under those of Eastman and Bisley, however, it's a damn good time.

*I was going to write "panties" but it has recently come to my attention that women don't like, or even use the word "panties." Is that true, ladies? Or only true of the women I talk to...?

**Well, unless Quentin Tarantino, or someone who similarly loved the source material and was similarly talented at "sampling" other films in their work were was the filmmaker doing the adaptation. But one imagines that From Dusk Till Dawn is the last horror/western mash-up Tarantino will be involved in. For what it's worth, the plot of this comic is far superior to that of From Dusk Till Dawn though.
Posted by Caleb at 8:51 PM