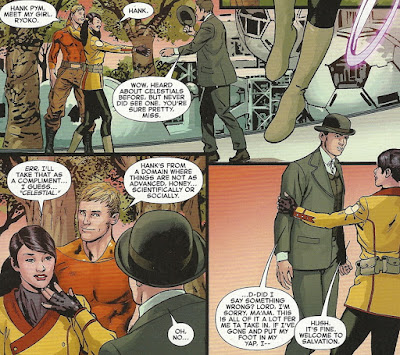 In the previously reviewed Age of Ultron Vs. Marvel Zombies, the Hank Pym from the Old West domain of 1872 is introduced by the modern Marvel Universe version of OT* Jim Hammond to his girlfriend in this universe, Ryoko/Radiance, who is Japanese. Pym immediately refers to her as a "Celstial," and she responds quite awkwardly.

I actually had to read through this sequence twice before I realized what writer James Robinson was getting at. By having 19th Century Pym refer to Radiance as a "Celestial," he meant "a Chinese person," as that was a common term for Chinese immigrants to English-speaking countries at the time, as China was sometimes referred to as "The Celestial Kingdom."

It obviously fell out of disuse, and I'm honestly not entirely sure how derogatory a term it actually was at the time. Using it today would be similar to using "colored" or "negro," I suppose, as those were once widely acceptable terms in mass media in generations past, but are so archaic that they are know only used negatively, and guaranteed to cause offense. There are certainly much stronger racial slurs to use for both Chinese people and black people today...as there were in the late 19th century, too.

And then there's the whole thing about applying an old-timey term for Chinese person to a Japanese person.

Of course, in the Marvel Universe, a "Celestial" is also a term that refers to a race of astronomically ancient, god-like alien beings that are part of that fictional shared-setting's creation myth, being responsible for the creation of the universe, life and death (They were, of course, created by Jack Kirby, like so many of the foundational elements of the Marvel Universe; he created the Celestials in 1976 in his book Eternals).

Since the Ryoko of this particular scene (and comic) is apparently the one from the modern Marvel Universe (where Robinson and artist Marc Laming created her in Robinson's short-lived All-New Invaders book) and the grand-daughter of a World War II vet, I wonder, wouldn't she think of those Celestials first (um, as I did), before the 19th term for people from China in the U.S., England and other English-speaking countries?

On the other hand, the Kirby Celestials are generally depicted as gigantic humanoid creatures encased in Kirby-esque armor, so maybe she would think of the old-timey term first...

I too was confused by that scene and thought the same thing you did Caleb. As a Chinese American, I can speak on that and say that "Celestial" is considered "racist" in the sense that it is so archaic that only people from another era would even use it, and not in the sense of it being purposefully derogatory.