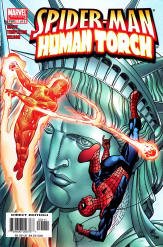 Why’d I Wait?: Both Spider-Man and the Human Torch can be incredibly fun characters in the right writer’s hands, and I’ve long admired the work of series artist Ty Templeton, but I had no idea who this Dan Slott character writing the thing was when it was originally released.

Why Now?: After hearing the ten thousandth person praise Slott’s work on The Thing, She-Hulk and G.L.A., I thought I’d check my local library for some of his trades, and all they had was the Spider-Man/Human Torch: I’m With Stupid digest.

Well? As soon as I got done reading the library’s copy of the trade, I set it down, went straight to my computer, and ordered a copy of my very own. Simply put, this was one of the most fun mainstream superhero comics I’ve read this year, and certainly one of the better Spider-Man books.

Slott takes us through various stages of Spidey and Torch’s rivalry/friendship by teaming them at different points in their continuity. Each issue of the original stories is a single story, but an overarching story about the heroes’ and their civilian identities’ mutual jealousy of one another, a theme that loops in and out of the episodic adventures.

So we get Johnny Storm and Crystal hanging out with the gang at the Bean during Spider-Man’s college years. Torch giving Spidey driving lessons in the Spider-Buggy between battles with the Red Ghost and his super-apes. Black Cat and Black Panther guest-starring during the time Johnny and Spidey both wore black. And even an appearance by Paste Pot Pete, and some talk of clones.

It’s mostly all about the fun and the funny, which Slott has become known for, but there’s also some surprisingly strong pathos here and there. I picked it up knowing I’d love the art and not sure what to expect from the writing; but when I set it down, it seemed clear that Slott was the star here. Not that Templeton’s off or anything, of course. In fact, while it doesn’t seem to be in his regular style, he does a great job of drawing to the era of comics the story is plucked from, imitating a series of Marvel house styles without ever losing himself in them. A pretty tough trick to pull off, really.

The digest format isn’t the best way to read the series, as it has the same problems as all of Marvel’s digests. I’m not really sure what they’re thinking is when it comes to digest collections—if they’re trying to trick young manga readers into picking it up thinking it’s manga, or if they’re simply seeking a cheap, kid-friendly format.

Either way, they’re off base. On the one hand, the dimensions of the art and letters are for standard comics, and thus seem too small on the digest pages (and don’t read one bit like manga, which is more than just an art style or set of dimensions, it’s a different type of storytelling with it’s very own visual language). And on the other hand, I doubt many kids will give a damn about the story it’s telling—if you don’t remember the decades worth of Marvel history Slott pull’s the details of each chapter from, half the charm of the book will be lost on you.

Would I travel back in time to buy the first issue off the rack?: Hell yes, the sanctity of the space-time continuum be damned.
Posted by Caleb at 4:00 PM