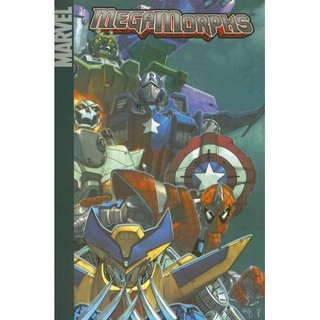 Why’d I Wait?: Good question. In general, I usually buy just about anything written by Sean McKeever, since he lives in the same city as me, shops at the same comic shop and is an all-around nice guy—the kind of guy who’s dreams of comic book writing you really want to support (He also tends to be at the shop on Wednesdays, so maybe I just feel like I have to buy his books or he’ll notice and feel bad).

And it’s not like buying Sean McKeever books is a chore or anything—McKeever’s name-making Waiting Place is a great series, and I’d recommend much of his Marvel work to anyone who likes simple, straightforward superheroics (Particularly Gravity, Mary Jane and Sentinel).

But MegaMorphs was a hard, hard sale, as it was based on a pretty stupid-sounding toy line: Marvel superheroes piloting giant mecha that look like them and have their powers, and can transform into vehicles. Plus, one of those superheroes was the Hulk. The Hulk…piloting a complicated robot vehicle? Who could wrap their heads around that?!

Why Now?:It was just this side of an accident. I was in a shop and wanted to buy a single $2.99 comic book, but all I had was a credit card, and it seems like a waste to use credit for such a measly sum, so I threw in McKeever’s “MegaMorphs.”

Well?:The opening chapters are culled from the little comic books that were included with every MegaMorph toy, which reminded me fondly of the little He-Man comics that introduced me to the medium when I was just a wee lad.

Unfortunately, the quality of the free MegaMorph comics are about the same of those inane He-Man comics were. Tony “Iron Man” Stark invented mechas powered by superpowers, and he sends a team of Marvel heroes after Dr. Octopus, who is using a similar giant robot, one at a time. They each get defeated until they team-up and overwhelm Dock Ock with superior numbers.

Things pick up considerably when the digest gets to collecting the issues of the tie-in series that Marvel published. Sure, it’s still sort of silly to see the Hulk in a robot shaped like the Hulk, but it’s silly fun. The line-up of the MegaMorph team is probably the best line-up of any Marvel team thus far—Spider-Man, Iron Man, Captain America, Wolverine, The Hulk and Ghost Rider—and while this may not be the “real” versions of the characters, McKeever writes them all as if they were. If you like Spider-Man’s quips, dumb Hulk’s dumb ranting or Wolverine’s bad-assed-ness, then you’ll like ‘em just as well here. The relationship between Spidey and the vengeance-obsessed Ghost Rider is pretty cute, too.

Lou Kang’s art is fine but not spectacular, and, like all Marvel digests, the presentation is pretty poor (the art and letters, created for full-size comics, is small and smooshed to fit the digest dimensions), but it’s a surprisingly fun read for Marvel fans (particularly considering the value—152 pages for $7.99)


Would I travel back in time to buy the original issues off the racks? Nah. The bulk of the book, the story culled from the Marvel miniseries rather than the toy story that serves as a prelude to it, is cheesy fun, but the lack of suspense of any kind means it works much better as one, continuous story instead of chapters read serially—If I had picked up MegaMorphs #1 off the racks the Wednesday it saw release, I doubt I would have picked up #2.
Posted by Caleb at 5:20 PM