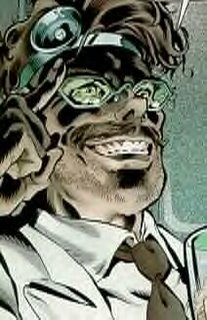 In 52#2 , Doc Magnus, creator of the Metal Men, gives Booster Gold's malfunctioning robot sidekick Skeets a once over, and then mentions that he's due to pay a visit to someone at some place called "Haven." We see Magnus on the free side of a glass cage, talking to an angry man with a moustache who boasts, "I created the world's first artificial souls." Near the end of their conversation, Magnus refers to this pissed-off (if not quite mad) scientist as "Professor Morrow."

Why, it's Thomas Oscar Morrow, aka T.O. Morrow (Like, "Tomorrow"—get it? Ah, it was the '60s...). Morrow's been messing with the DC Universe's good guys since his first appearance in 1964, and is probably best known for creating the android Red Tornado, who was supposed to destroy the Justice Society, but ended up joining them instead. He also created a "fourth dimensional grappler" and other silly sounding weapons.

In recent DCU history, he collaborated with the deformed Professor Ivo (creator of the Amazo androids) to create Tommorrow Woman, who was supposed to be a Trojan horse weapon to destroy the JLA by joining the team and then stopping the heroes' hearts with an electromagnetic pulse (She ultimately pulled a Red Tornado). This occurred in JLA #5 by Grant Morrison, Howard Porter and John Dell, and has since been collected in JLA: American Dreams.

Since then, Morrow antagonized both the JLA and the Justice Society in two-part prestige format miniseries Two Thousand, a crpyto-sequel to DC One Million, by Tom Peyer, Val Semeiks and Prentis Rollins. In the year 2000, the modern-day Morrow smuggled state-of-the-art technology back in time to the 1940s, messing with the timestream, and leading the modern day JLA to follow him back in time, where they ran afoul of the JSA, who didn't like what they saw of the future. (It hasn't been collected into a trade, but is well worth tracking down for JLA or DC fans).
Posted by Caleb at 5:35 PM