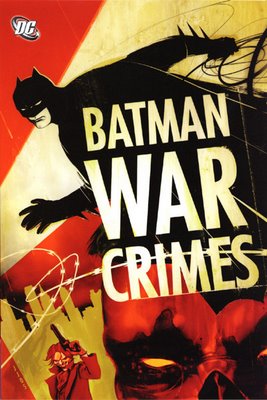 Why’d I Wait?: Same reason I waited on most of the last three volumes' worth of “War” stories—I’d seen just enough to know this probably wasn’t something I’d want to spend money on.

Well?: My initial impulse was correct—I did not like the stories contained within this collection. But beyond the quality of the stories and the bizarre plot points (particularly in the final one), let’s look at this as it was published in this edition, as a collection of several different stories into one single volume which, presumably, is meant to be seen as a single, unified work.

Conatined within are stories from six different comics, two different Batman ongoing series and two different Batman specials. None of them continue into one another, exactly, and the result is an anthology loosely organized around the principle of what post-“War Games” Gotham City is like. Read straight through, it has the same jarring clashes of art styles that the trilogy of “War Games” volumes had, but it lacks the sense of propulsion that moved those books forward; War Crimes moves in fits and starts.

I’m not exactly sure why it was published as a trade collection at all, really. The main purpose of most of these stories is simply to set up the new Gotham's status quo, but, post-Infinite Crisis and “OYL,” that status quo has changed again. Nothing in this book is the least bit relevant to the future of Batman comics (and, as we’ll see in a moment, little of it is consistent with past Batman stories, either). In that sense, it’s a book so dated that it’s one of the least essential ones to include in anybody’s Bat-library.

Let’s take the stories one at a time, shall we?

First up, Bruce Jones and penciller Eddy Barrows give us “Strangers in Paradise,” in which Black Mask is interrupted during some torture by a lieutenant in his crime organization, and he then walks us through the current state of the Gotham underworld, summarizing the events of “War Games” and the first half of “Under the Hood.”

Next up, Will Pfeifer and Ron Randall do something similar from Commissioner Akins’ perspective; this story at least has something salient to say—I like Akins’ use of the word “criminal mastermind” to describe Batman, and there’s a creepy, three-panel Joker story embedded within this short story.

That’s followed by another short story by Andersen Garych and penciller Tom Derenick (recently seen kicking all kinds of ass drawing Steve Engleheart’s JLA: Classified and JSA: Classified snoozefests), this one featuring Cassandra “Batgirl” Cain and Tim “Robin” Drake training together in Bludhaven. It’s a great little character piece featuring the two, accentuating their differences, and clearly showing who is far superior than the other in which area of expertise needed by Gotham crimefighters. (What I really dig about this Batgirl and this Robin is that each of them make up half a Batman; B.G.’s driven and an unstoppable hand-to-hand combatant, but has a long way to go when it comes to being a detective; Tim’s an incredible detective, but lacks the will to ever actually be a Batman). The story is particularly weird to read after the developments of recent issues of Robin, however; this is just one more story that completely contradicts the whole Cassandra Cain Is Suddenly Evil For No Reason plotline.

Finally, after three lead-ins, this brings us to the actual “War Crimes” story, a four-parter that may go down in history as the most insane Batman story ever (even including the Silver Age one where he rode a giant Batarang).

After Stephanie Brown’s death and time spent as both the Spoiler and Robin is revealed on television—which would make figuring out Batman’s secret identity pretty easy, although that never really comes up—Batman learns that there was something funny about Stephanie’s death at the end of “War Games.” It seems treatment may have been withheld, and her medical records from that night are suspiciously missing, and difficult for him to track down.

As he investigates that solo, he also has to contend with the Joker, who is seeking revenge on Black Mask for taking his job by killing a Robin (Nevermind the fact that “Under the Hood” makes it so that the Joker never actually killed a Robin before), the Black Mask (who is dressing up as Batman in an effort to discredit Bats), and a new player with a badly burned face whose identity is spoiled by one of the covers.

Everybody fights, the Joker again seems lame (don’t ask how he got away from Red Hood, who was holding him captive last time we saw him; I have no idea), Batman takes his shirt off in the middle of a fight and Black Mask is captured and escapes moments later.

Then comes the conclusion, wherein we learn who “killed” Spoiler. Or, at least, who withheld medical treatment from her, which lead to her death (I guess Black Mask technically killed her, since he brutally tortured her within an inch of her life before she even got to the clinic where she died).

Ready for the weirdest fucking character 180-degree turn of all time, even weirder than Batgirl going batshit insane in the pages of Robin? Dr. Leslie Thompkins, elderly medical doctor, avowed pacifist and one of Bruce Wayne’s closest friends and confidants (even though she disagreed with his being Batman), decides to break her Hippocratic Oath and let Stephanie Brown die. This happens at the end of a story where she saves the lives of murderers and criminals, and stands up to the police and gangbangers when they come into her clinic, saying that she can’t let any harm come to her patients, even if she has to break the law or risk her own life.

She lets Spoiler die. Why? She was thinking that maybe if Batman lost an ally in his war on crime, he’d hang up the cape and cowl once and for all (Even though it was the death of loved ones which lead him to become Batman, even though the crippling of Barbara Gordon or the death of Jason Todd—still in effect, as far as she knew—didn’t deter Batman one bit).

Rereading Leslie and Batman’s final conversation at the end of the book, I still can’t see how any of it makes any sense. She claims she wanted “to end it all—all the secret warriors in hoods and capes. The endless violence. I could no longer be a party to such madness. Best to sacrifice one to caution others from putting on those stupid masks.”

Uh, yeah, that’s one way. Or she could have saved Stephanie Brown’s life, then publicly outted her, Batgirl, Robin, Nightwing, Catwoman and Batman, with enough evidence that she’d have to be believed, thus ending, or at least making very difficult, their lives as “secret warriors.”

More ludicrous still, this pacifist who has spent much of her life bitching at Batman for punching out crooks and spraying them with sleeping gas, pulls out a revolver and says, “I’m too cowardly to take the last step. That’s what you’re here for, Bruce.” Or in other word, “Look, I know you don’t kill, and have never killed anyone, and yes, I know I’ve spent my entire life telling you to be less violent, but, would you mind shooting me?”

He says no, of course, and then gives her a speech about how killing to stop the cycle of violence is “a sick idea from an evil mind.” And evil mind like Police Commissioner James Gordon’s? Or any of the GCPD who have killed in the line of duty? Or soldiers fighting in wars? Or Wonder Woman, who offed Max Lord and never had Batman trying to bring her in? Or former fellow Justice Leaguers like Aquaman, Green Arrow, Hawkman, Guy Gardener or Major Disaster? Or Superman, who killed the Phantom Zone criminals before vowing to never kill again? Or like Batman himself, who tried to kill the Joker at the end of “A Death in the Family?"

I particularly like when he tells her that she’s dead to him, “What’s left is just another soulless killer—one more name to be added to my criminal database.” Like this is the start of her criminal career or something, and she might appear in a mask and cape in next month's issue of Batman calling herself the Treatment With-Holder or something.

Would I Travel Back in Time to Buy the Original Issues Off the Shelf?: No. But man, if I could time travel, what I wouldn’t do to disrupt the Bat Office editorial meetings regarding this whole stupid crossover…
Posted by Caleb at 6:50 PM