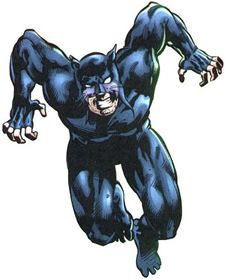 This week’s issue of 52 featured the origin of Wildcat, the former heavyweight champ who’s origin, as writer Mark Waid tells it, essentially amounts to Ted Grant dressing up like a cat to beat up some crooks causing him problems and deciding that he enjoyed it so much that he would continue dressing like a cat to beat up other crooks.

The art is provided by Jerry Ordway, who does a hell of a Wildcat, giving him the unnerving cat eyes, complete with vertical pupils, that make his mask look pretty scary, as well as the taped fists and, floppy ears and stubble that make him look a bit like a lunatic (Obviously, he’s a guy dressed like a cat man, not an actual cat man—which is even scarier. What kind of maniac shows up to scrap dressed like a giant house cat? The kind you don’t want to fight with).

While the art portion of the origin is dead on, the “Essential Storyline” suggestions are much weaker than usual. They don’t even mention any JSA stories, which seems odd, considering that, post-Crisis, the story of the JSA is essentially the story of Wildcat; rarely will there be a JSA story or appearance that doesn’t prominently feature him. At any rate, let’s get on with our overly complete look at Wildcat storylines.

Sensation Comics #1: This is the book that Wildcat made his first appearance in, way back in. Good luck finding it. Hell, even a reprint might be tough, as, if it’s made it into an archive collection, it certainly isn’t under this title.

JSA: Classified #8-#9: This is a two-part story written by Peter J. Tomasi and drawn by JSA artists Don Kramer and Keith Champagne, in which the Dragon King somehow gets his hands on the Spear of Destiny (Wow, the Shadowpact could have really used that during Day of Vengeance!) to take control of Wildcat and Flash I. It’s a nice little ‘cat story, with Tomasi doing solid character work on both his stars, but it’s not exactly an important, let alone an essential, one.

Batman/Wildcat #1-#3: Hit your local comic shop’s quarter bins for this 1990s classic (that’s where I found it), in which Batman and Wildcat find themselves involved in an underground fighting ring thing. It’s a pretty manly story, but not as important in ‘Cat history as some of the books below. Not sure what makes this particular mini any more “Essential” than Catwoman/Wildcat.

Here’s what they missed…

JSA: I can’t imagine why the last volume of JSA wasn’t included on that list, as it and its many spin-offs have been the place to see Ted Grant since it was launched a few years back. Wildcat joined the first Green Lantern and Flash in putting together a rather ragtag team of legacy heroes—Sand, Jack “Starman” Knight, Black Canary, the Star-Spangled Kid, the android Hourman III, the new Hawkgirl II and the re-christened Atom-Smasher—to take on the Dark Lord Mordru, and the team stuck together. It proved a bestseller too, and pretty much the entire run is available in trade paperbacks today.

Wildcat has been something of a bit-player on the team overall, with the main sub-plot involving him being one that seems to imply that he was developing a problem with alcohol, although it never really went anywhere once the universe entered it’s chaotic Identity Crisis to Infinite Crisis period.

If you approach the title simply looking for Wildcat stories, though, you can’t miss #10, the only real spotlight issue he gets. Injured and fresh from a soak in the tub, Ted Grant is minding HQ solo while the rest of the team is off on an adventure. Who should pop in for a visit but the entire Injustice Society, leaving Grant to tackle Johnny Sorrow, Count Vertigo, Icicle, Golden Wasp, the new Tigress, Blackbriar Thorn and Geomancer all by his lonesome. The Society doesn’t stand a chance. Grant also gets some attention in #52-#53, in which the new Crimson Avenger starts whittling down his nine lives (see below) to avenge a murder that Wildcat had committed and covered up (sorta) back in the day.

The Justice Society Returns!: This 1999 series heralded the upcoming JSA relaunch. Masterminded by writers James Robinson and David Goyer, it was a period piece pitting the entire JSA—and pretty much every Golden Age hero—against a giant being called The Stalker. ‘Cat appeared in the bookends, and teamed up with Hawkman to star in tie-in book Thrilling Comics #1, which featured a story by apparent Wildcat fan Chuck Dixon and art by Russ Heath. The whole shebang is available in trade.

“Crisis Times Five”: DC tested the waters of a JSA revival with this four-part arc in Grant Morrison, Howard Porter and John Dell’s run on JLA. As Johnny Thunder’s Thunderbolt gets passed on to a new bearer—Jakeem Thunder, here still going by “J.J.”—the JLA teams up with both Captain Marvel and some JSAers (Wildcat, Sentinel Alan Scott and the original Flash, plus the hostless Spectre Force)—for perhaps their most insane battle of all time. Without spoiling things, it involves a war in the Fifth Dimension, thunderbolt versus thunderbolt, Triumph and the remnants of the Justice League Task Force and the most unlikely villain of all time. The story proved important to JSA history on several fronts, but is most remarkable—in my book—for tying the “words equal power” motifs of the Thunderbolts and the Fifth Dimensional imps together. Geoff Johns would later re-write and un-write some of Morrison’s innovations here (some for the better, like Jakeem’s name, some for the worse, like the reconfiguration of the T-Bolt), but for our purposes here, we’re most concerned with Wildcat’s role.

He and the Huntress fought living mailboxes and a rampaging genie in Central City while the rest of the heroes got the really tough jobs. In the end, he inspires J.J. to get in the hero game and, it’s revealed, he has nine lives, something he has been trying to keep secret thus far (and succeeded, since this is the very first mention of ‘em). “Since when do you have nine lives?” an incredulous Alan Scott asks, to which Grant responds “Since 1945….Come on, Alan! Do I look seventy? You think this is diet and exercise?” It ran through JLA #s 28-31, and it’s available in trade form as part of JLA Vol. 5: Justice For All, a collection that also contains the Mark Millar-scribed fill-in story that pits Amazo vs. the League’s entire reserves roster.

Wildcat, Trainer Extraordinaire: As the origin back-up in 52 mentions, Wildcat trained Batman (Well, I think he was just Bruce Wayne back then), Catwoman and Black Canary. Many of Wildcat’s post-Crisis, non-JSA appearances have revolved around his abilities as a trainer and/or his association with his former students, particularly Selina “Catwoman” Kyle. All-Star Comics 80-Page Giant #1, for example, features a story written by Robinson and Goyer in which Jack Knight and Ted Grant go a few rounds in the ring. It’s a nice little story, and probably the highlight of the issue (the Mark Waid-written story about the Golden Age Atom, in which Wildcat and Dr. Mid-Nite guest, is a close second). Selina calls on Ted Grant to train her protégée Holly (who’s currently running around in the cat-suit) in Catwoman #20, a nice little story by Ed Brubaker, drawn by Cameron Stewart. By day, Grant puts Holly through her paces, while at night he and Selina dress up like cats and run around rooftops fighting crime together. Grant’s appearance is just a cameo in Identity Crisis but it’s in the same context, with the two Green Arrows training at his gym. More recently, Grant was recruited by Black Canary to watch her back on a risky undercover mission in Singapore, as part of the Gail Simone-written story “The Battle Within,” which ran through Birds of Prey #81-#85.

Other universes: Like the rest of the Golden Age heroes, Wildcat appeared in James Robinson’s dark, deconstructionist graphic novel The Golden Age, about the superheroes of the WWII era falling before a government conspiracy to do away with superheroes, although his role amounted to little more than a cameo. In Darwyn Cooke’s New Frontier-iverse, the secret identities of many of the Silver Age heroes all convene in Vegas to watch a Ted Grant match, though Captain Cold and the Flash end up spoiling the fun.

Other media: Like most of the JSAers, Wildcat hasn’t been seen much outside of comics. He sort of appeared in the Justice League cartoon, when Green Lantern and some Leaguers found themselves on the show’s version of Earth-2, although the motorcycle-riding, cat-themed hero went by the name “Cat Man.” The actual Wildcat appeared in the follow-up series, Justice League Unlimited, in the episode “The Cat and the Canary,” in which a Dennis Farina-voiced Wildcat is busting villain and hero head alike in Roulette’s arena do to his addiction to fighting.
Posted by Caleb at 3:08 PM

I think that "Crisis on Infinite Earths" is a worthy mention, mainly because Ted was hit by lightning and lost the use of his legs, necessitating the takeover of the mantel by Yolanda Montez. He's still wheelchair-bound in "Last Days of the Justice Society", but can apparently walk again when the team returns from Ragnarok in "Armageddon: Inferno".