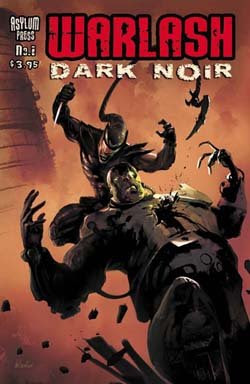 Warlash: Dark Noir #1 is the first issue of a new ongoing series from Asylum Press, and, having read it, I can’t help but think I’m missing something.

Has the title character appeared elsewhere before? Not according to warlash.com or asylumpress.com, and yet this first issue is formatted more like a book featuring a pre-existing character would be rather than an introduction to a brand-new character.

It’s not just that things begin in mdias res, but that they do so four times in the same book. This is anthology of stories all featuring the character Warlash, all written by Frank Forte and each illustrated by a different artist.

The unfortunately named Warlash looks like some sort of hodgepodge of other superheroes—some Batman here, some Judge Dredd there, maybe a touch of Shadowhawk—but his distinguishing characteristic seems to be his scorpion-like tail, which ends in a sharp, curved blade. He fights crime and monsters and the like in some sort of futuristic version of Pittsburgh, referred to at least once as “The Pitt.”

It’s really not as bad as it might sound.

Warlash’s shoulder pads and opaque visor ensemble weren’t the only things about him that had me thinking of Judge Dredd; there’s also Forte’s writing. The stories—particularly the first and the fourth, which seem relatively lighter hearted—reminded me of the earliest Judge Dredd stories in both the hard-ass, no nonsense sensibility of the narrator/protagonist and the inconsequential, nearly random nature of the proceedings.

In the case of Dredd, of course, these eventually all lead to something massively influential, retroactively instilling a greater meaning to the earliest stories that wasn’t there when they were originally being written and drawn. So perhaps it sounds silly to compare Warlash to those, but if the future of the feature is uncertain, the spirit of it at least recalls that of early Judge Dredd.

The first story, “Phlegm Fatale” (get it?!), is both written and drawn by Forte, and deals with Warlash fighting a man-eating tentacled monster in the sewers to save a prostitute he uses as an agent; it’s a lot of speechifying by the monster (who used to be a mad scientist) and terse, manly-man narration from Warlash, who shoots, stabs and tail-lashes the creature until the “to be continued.”

In “Wormwar,” drawn by Szymon Kudranski, Warlash fights an A.I.M.-like group of scientist criminals who pull a job with a giant techno-organic worm creature thing as their muscle; it’s more straightforward superheroics, and also ends with a “to be continued.” While Forte’s art had more than a touch of the cartoony to it, and lots of squiggly drawn lines still visible under the ink and coloring, Kudranski’s looks more heavily computer-infused, perhaps in part due to the subject matter.

That brings us to “The Demon,” another straightforward—but super gory—story in which Warlash encounters a weird looking demon with three lower jaws that some occultist kids raised and he has to put down. This one ends without a to be continued, but the demon swears vengeance from its hell, essentially promising a rematch. This is by artist Marcin Ponomarew, and is, in some ways, the strongest entry visually. The demon-design is a little self-consciously metal, but the gore is almost splatterstick in it’s over-application, and the hero’s proportions are, like Forte’s version, walking a tightrope between cartoony and serious.

Finally comes “Grubbs,” a black and white story by Steve Mannion, whose work I was just raving about on Friday. The story is as disposable as the others: a guy with some super venereal diseases that have deformed him is now going around touching others, which is enough to transfer hideous deformities to them. Mannion’s hugely proportioned, Warlash is on the case. The chief pleasure to this story is Mannion’s art, which here resembles Eric Powell’s Goon work more than a little bit (That’s a good thing, by the way).

While the art styles are all quite different, they’re all also quite good. It’s less easy to come to any conclusions about the stories, as none of them really finish, but there’s nothing terribly wrong with any of the stories either.

You could certainly do worse for disposable super-comics entertainment.

And the value! There are a full 46 pages of story in here, three-fourths of ‘em in color. The production is slick and accomplished all around, and the book has a spine, like DC’s old “prestige format” books, rather than staples. And the whole thing costs just $3.95; four cents cheaper than 22-page cardstock cover Marvel comics like Secret Invasion or anything from their Max or Marvel Knights line.

This issue is already available; the second issue drops in December. You can see the first four pages of all four of these stories, and get a much better idea of the art than you could probably get from me talking about it above, here.
Posted by Caleb at 9:34 PM