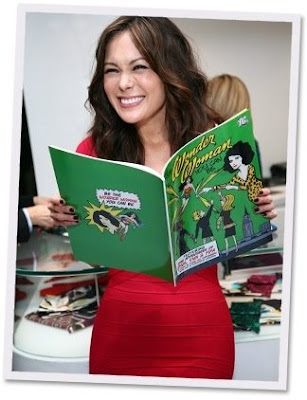 If I link to Heidi MacDonald’s post about that creepy-looking Wonder Woman comic, that will give me an excuse to post a picture of Lindsay Price, right?: Right! Earlier in the week MacDonald had some links to various places dealing with Diane von Furstenberg’s Wonder Woman-inspired fashion designs and the comic book she co-created.

Why wasn’t this comic book on sale in my local comic shop on Wednesday? I don’t know. Shouldn’t DC be trying to get it into readers and critics’ hands? It can’t possibly be any worse than Jodi Picoult’s run, can it?

I’d definitely be interested in giving it a look. It seems to be quite gigantic, from that photo of Price holding a copy. Or else she is merely a tiny, tiny woman.

EDILW favorite Price, as you may know, is an actress currently enjoying some success with Lipstick Jungle, but she’ll always be Janet Sosna, one-third of the staff of altweekly The Beverley Beat, wife of Steve Sanders and mother of Maddy to me.


This is your chance, DC!: The subject of Marvel’s weird pricing—$3.99 for Max, Marvel Knights and now seemingly every miniseries, $2.99 for the rest of the line—came up in that “Cup O’Joe” column that used to be on Newsarama but is now on myspace.com.

I wouldn’t be a bit surprised if Marvel does push all their comics up to $3.99 in the near future, as I’ve suspected the gradually increasing number of $3.99 comics were trial balloons for that very effort.

The best selling comic book is currently Secret Invasion, issues #2 through #7 of which have all been $3.99 for just 22 pages. So, if I’m Marvel Comics, I see that Direct Market consumers are willing to pay $4 for a 22-page comic book, as long as it’s something they are either excited about or feel they have to read.

Of course, Secret Invasion seems like a pretty special case in that it’s a big crossover event which just about every Marvel Universe title ties into at some level, and which promises to affect the MU status quo the way Civil War did, so I imagine quite a few people are reading it in spite of the hefty price tag, people who wouldn’t be reading it if they didn’t feel it was a special occasion.

The Max books, on the other hand, all sell dismally, and they’re also $3.99 for 22 pages. Does the fact that these all seem to exist out of continuity, and thus have no impact on the Marvel Universe line.

If Marvel does make the jump soon, conventional wisdom holds that DC will follow shortly afterwards. They shouldn’t. If they can hold their comics at $2.99, that might finally give them the edge they need to close the gap with Marvel when it comes to market share.

I know I have about a half-dozen or so comics from both companies I’m considering dropping at the moment, and if some cost a dollar more than the others, well, that sure would make the decision of what to drop and what to keep getting a lot easier.


Ten cartoonist years is like 70 people years: This past Sunday marked the ten year anniversary of James Kochalka’s sketchbook diaries. That is an incredible accomplishment, made even more incredible by the fact that it’s not like that was the only thing Kochalka’s been up to these past ten years. He also found time to create a slew of comics, some children’s books, some music and even get married and have some kids.

To celebrate, Kochalka’s publisher Top Shelf is having a sale on many of his works and you guys seriously need to check it out—there are some crazy good deals.

I would personally recommend his Super F*ckers #1-4, the prices of which have been slashed from $7 and $5 down to $3, the price of your average Marvel or DC superhero book. These are, however, one million times better than your average Marvel or DC superhero book. SuperF*ckers is what The Legion of Super-Heroes would be if the LOSH were composed of real teenagers: Horrifying, yet hilarious from a safe distance.

The two Conversation books, in which Kochalka’s avatar carries on a conversation with Craig Thompson’s avatar (in #1) and Jeffrey Brown’s avatar (in #2) are kind of cool too. They can be a bit boring, as the cartoonists talk about their craft and the nature of the universe or whatever, but it’s a lot of fun to see such talents essentially working on a jam book where each draws part of each page. Plus, Kochalka and Brown get in a fight.

These are also only $3 a piece.

I’ll probably have at least one Kochalka review up in the next week or two, as my thoughts turn one more to all things Kochalkic.


Meanwhile, in Las Vegas…: Hey, did you know that there are a whole bunch of mainstream comic books dealing with this year’s presidential election? Of course you did, because you’re reading a comics blog, and are all up on this kind of thing.

But did you know I wrote a story rounding up various publishers’ attempts to react to/cash-in on the election? No? Well now you do, so you have no excuse not to click over to Las Vegas Weekly and read my article “Political Cartoons.”

You know, just in case EDILW isn’t quite meeting your Caleb-writing-about-comics needs.


Super-Endorsement Update: I had originally planned to do thirty-some of these, running them from October 1 to November 3, but ended up tossing a bunch of ideas out for not being at all funny (and considering some of the ones that did make the cut, you know that’s saying something) or, in a few cases, being too hard to draw in the time I have left.

I’ve got three, possibly four left, of some pretty minor characters—two villains, a monster hero, and possibly one more hero—and that should finish off the super-endorsements sketch blog, at which point I will return 100% of my focus to bitching about superheroes and writing tedious four thousand-word reviews of graphic novels.
Posted by Caleb at 9:10 PM

I don't know Kolchaka books that don't feature monkeys and/or robots? Seems kind of risky to me...

Actually I'll have to remember to go grab those Superf*ckers issues, since I regret not picking those up, and that is a crazy awesome deal...

"If Marvel does make the jump soon, conventional wisdom holds that DC will follow shortly afterwards. They shouldn’t. If they can hold their comics at $2.99, that might finally give them the edge they need to close the gap with Marvel when it comes to market share."

That logic doesn't work at all, especially since so many DC books are so awful.

I'm not saying Marvel's books aren't awful, but Marvel certainly knows how to generate more interest in their books (just look at the comparison of sales for the first issues of Secret Invasion and Final Crisis).

I think many of DC's current readers are those who are buying less than five books a month, or those who wouldn't stop buying DC books even if Chuck Austen took over the entire line.

Raising the prices won't put a huge dent in their readership - at least, not any more so than they've managed to do based on content alone.