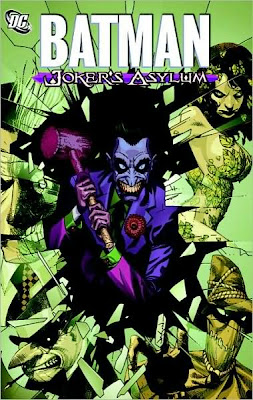 I was wrong about you. When you were originally released as a miniseries in 2008, I scoffed at the very idea of you.

I was pretty disenchanted with the direction of the Batman books at the time, and was convinced Batman group editor Mike Marts and I must have had completely polar opposite aesthetic tastes, as I hated the work of almost every artist he was giving work at the time.

While I was familiar with the work of one or two of the writers and artists involved, only artist Juan Doe’s name was one that could get me to buy just about anything. The premise, a series of one-shots focusing on various Batman villains, didn’t seem terribly promising—surely at this point in my life, I’ve read all of the Two-Face and Poison Ivy stories I need to read, haven’t I?

And then there was the final straw, the titles of the comics. They were essentially a five-part miniseries with the binding conceit of The Joker serving as a sort of Cryptkeeper or Cain of The House of Mystery style horror host narrator, telling scary stories about his fellow psychotic Batman villains, and then different creative teams telling stories with the rogues as the protagonists, and Batman appearing only in the periphery.

So with the exception of the fourth issue, Joker’s Asylum: Scarecrow #1 by Joe Harris and Juan Doe, which featured a character I’ve always been particularly fond of by an artist I was extremely interested in, I sat this one out, despite some exceptionally positive word of mouth regarding the Penguin issue.

I recently became interested in the series again when after encountering Guillem March’s rather incredible work on Detective Comics #851 and Batman #684 and learning that he drew the Poison Ivy issue for the series, and then reading Kevin Church’s rather positive review of the trade collection.

I borrowed the slim, 128-page volume, now simply titled Batman: Joker’s Asylum (with only the fine print revealing the original title and numbering scheme) from the library, and was enormously pleased with it. What seemed tired and irritating doled out over the course of five weeks or so in ad-packed chapters with cluttered cover design was pretty well transformed by the collected format (Damn 22-page serially-published comic books, you guys are so doomed!).

The Joker-as-horror-host works extremely well, and I was struck by what an elegant way it was to make Joker comics which don’t necessarily treat the Joker as a hero, protagonist or even a star. He pops in for a few dark-black jokes and lame puns on the first and last pages, and the 20 other pages are devoted to something other than his ongoing exploits. DC learned the lesson way back in the mid-seventies that a Joker ongoing is kinda hard to keep going. As popular as the character is, a little of him goes a long way, and the publisher has had some trouble using him sparingly in recent years.

The first chapter features The Joker himself in a story by Arvid Nelson and drawn by Alex Sanchez (with colors by Jose Villarubia). Greeting readers in his cell, he tells a story from “a few years ago” (which actually seems to be the seventies) in which he takes over a quiz style game show and holds the audience hostage until Batman shows up to save the day.

Without spoiling Nelson’s clever plot, he uses The Joker in such a way that the entire exploit is something of an elaborate prank, a fake out to prove the point that it’s not him that’s insane, but everyone else (or perhaps that we’re all just as bad as he is). And Nelson does so without changing The Joker any, as the character notes himself how unusual such a murder-free caper is for him: “Why, that was the most fun I ever had-- --without killing anyone.”

Sanchez’s art is appropriately representational and sketchy at the same time, reminding me quite a bit of a mid-nineties Vertigo house style. I didn’t care for his Joker design, which seemed to lean to heavily on Dark Knight's scarred-smile and clown make-up design, making his Joker the most realistic and least Joker-ish.

The Penguin story was every bit as good as I had heard it was, which was actually somewhat surprising—The Penguin isn’t really much of a villain any more, and over the last decade and a half or so he’s settled into a typical “legitimate businessman” style gangster role in the comics, with only his top hat, monocle and cigarette holder separating him from a generic, non-supervillain gangster character.

Jason Aaron tells a somewhat simple story of The Penguin falling in and out of love with a beautiful woman, framing through flashbacks some of the character’s formative year difficulties with the fairer sex, and makes him, in many ways, seem like the scariest villain in the book. By simple virtue of cruelty and a lot of money, he’s able to completely destroy a man in such a way that no one but he himself—not even his victim—realizes that he’s responsible. Aaron catalogs this destruction in the course of a single page, and man, that page has punch.

Jason Pearson’s art on this story is in some ways the strongest in the book. His style is cartoony enough that his Penguin is still a grotesque, bird-like parody of a human being, but still seems of the same world as all the other characters, and Pearson manages to make him downright terrifying looking when he gets angry, his left eye growing large and red behind his monocle.

Pearson does a hell of a Joker, who here has a very skull-shaped face, and a gaping, toothy mouth that evokes a ventriloquist’s dummy as he tells a story from the shadows. (Pearson, by the way, drew the cover for the trade, which you can see at the top of this post).

That’s followed by a Poison Ivy story entitled “Deflowered” because, ha ha ha, I guess it’s a funny joke having something to do with botany and the loss of virginity, although no one loses their actual or metaphorical virginity in any way throughout the story.

J.T. Krul’s Joker sections are okay, but the main event is extremely uninspired, your run-of-the-mill Poison Ivy-kills-a-series-of-people-who-have-killed-plant-life type of story, only really significant for how hardcore Ivy is at the end, chopping up a man with a small hatchet as if he were firewood.

Krul also involves Batman a great deal more than the other writers do. This is one of only two stories in which Batman has any lines, and the other one, The Scarecrow story, he only has one line. Here he’s on panel chatting with Commissioner Gordon and Alfred and actively hunting Ivy, rather than just showing up at the end to chase the villain away, as in the other stories.

I’m pretty crazy about March’s art, and this story doesn’t change that at all. DC seems to be using him mainly as a cheesecake artist, which is fine, as he’s a really good cheesecake artist, and as I said at Blog@ recently, well-constructed cheesecake is infinitely preferable to poorly made cheesecake.

I would say the art redeems this mostly ho-hum story. March gives Poison Ivy a Barbie doll figure with an uncomfortably arched back, but he manages to make “bad girl” art look, well, bad. Like, evil girl art. His Ivy’s expressions vacillate between a jaded boredom and an active cruelty. His Batman is pretty great too; his head looks quite like Brian Bolland’s Batman, and March draws him as a swelling figure with bulbous shoulders and a cape that tapers into nothing near the ground. He looks like a Batman in some panels. That, or a rather buff black ghost that can totally kick your ass, whether he’s actually tangible or not.

Re-reading what I said about the Scarecrow chapter last year, I don’t have any new insight to add: The art is great and manages to stand out amongst everything else in this book (and most other Batman art ever, which is quite an accomplishment given the billions of Batman stories), and The Scarecrow-as-slasher-in-a-teen-horror-movie premise is kind of cool, even if writer Joe Harris covers well-trod ground with the character.

The final story is a Two-Face one by David Hine and Andy Clarke, and their Two-Face seems like probably the most evil son-of-a-bitch in the collection. Ivy may chop a dude to bits with an axe, and The Penguin might destroy a guy for looking at him funny and put a woman on a path to an unspeakable fate, but you can kinda see things their way, if you look hard enough and remember, Oh yeah, these guys are psychopaths.

Hine’s Two-Face seems to act merely out of spite here.

He’s visited in the asylum by a burn victim who used to be a fireman and now has a mug not entirely unlike Two-Face’s. The good Samaritan want to counsel Two-Face, using their disfigurement as a sort of bond from which to start.

In return, Two-Face escapes prison, captures the man and his wife, and sets up an elaborate mind-fuck for him, in which the poor man must decide to either shoot and kill a bound and unconscious Batman, or see his wife’s face burned off with acid.

The ending—in which The Joker cajoles readers to get a coin and flip it to decide which of the two last-page panels should be the official end of the story—is pretty damn inspired and, for the second time in as many stories, I found myself impressed that I saw something truly new in a Batman comic.

Andy Clarke’s art is airy to the point of Frank Quitely-on-All-Star Superman levels, with most of the action occurring in large, background-less rooms. The panel composition if perfect though, and Clarke’s million-little-lines approach works remarkably well on subjects like these, where the burned and scarred flesh of the two men’s ruined faces is full of filigree.

Despite some weak spots here and there, Joker’s Asylum has strong spots to compensate, and it turned out to be an engaging primer of some of Batman’s scarier recurring villains. I imagine it works quite well as a Rogue’s Gallery 101 for newer readers, while offering older, jaded readers like me some new angles on some overexposed characters.
Posted by Caleb at 8:26 PM

A friend of mine lent me the single issues. I liked it a lot, actually, but the Ivy issue did nothing for me. I thought Two-Face as a bastard was a nice change from Two-Face as a tortured soul.

One thing I liked about the ending to the Two-Face story is that it's actually a test: you can choose the ending for yourself if you want to, but there's a strong temptation to fall into Two-Face's line of thinking and flip a coin to decide.

I read (and loved) the Penguin one, cause of Jason Aaron, but skipped the rest. Maybe I'll give them all a shot.