Marjane Satrapi's Monsters Are Afraid of the Moon 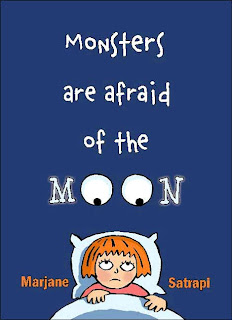 While rereading Chicken With Plums to re-review the new paperback edition, I came across one other English-language Satrapi book I had yet to read, children's picture book Monsters Are Afraid of the Moon (Bloomsbury; 2006).

It's not a comic or a hybrid picture book/comic book, but I thought it would be well worth taking a look at here, since Satrapi is primarily known for her comics work. It also provides readers with an opportunity to see the cartoonist working with subject matter that differs greatly from her autobiographical and family history work, and in a somewhat different style. Plus, it's in color! That's the first thing I noticed when flipping it open; when I think of Satrapi, I immediately think of the stark black and white (with no gradations of gray) of her comics.

The story is the story of Marie (that's her up there on the cover), a young girl with a normal, happy, care-free life. Or at least, normal, happy care-free day times. Night time is a different matter, as each night she's visited by "three of the scariest monster who ever lived."

That's how Satrapi describes the monsters, anyway. They don't look all that scary to me: 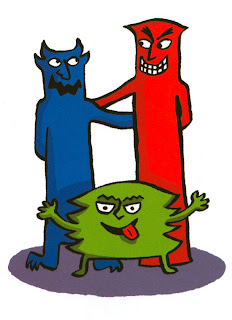 And their behavior seems more irritating than alarming. They pinch her "right on the nose," pull her hair and "the third scary monster would stick out his tongue and go cross-eyed." What a bunch of jerks.

Thinking of a solution, Marie realizes that monsters are afraid of light and decides to sleep with the light on, and thus she lived happily ever after.

No, that's not what happened.

Instead, Marie decides to cut down the moon, using a pair of scissors with really long blades, and shee keeps it in a birdcage in her room. So now it's always bright in her room at night, and the monsters no longer trouble her.

However, the night sky is now dark, which causes some problems for the town's cats, who can't see where they're going any more, and are always getting injured.

Satrapi draws pretty good anthropomorphic cats. Here they are, with all of their cute little injuries: 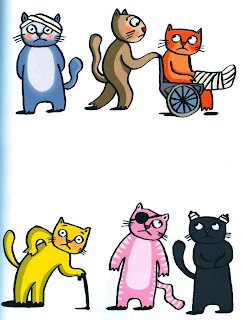 (Apologies for the shadow on the left edge of the scan there).

Oh, and check out this ambulance the cats ride in: 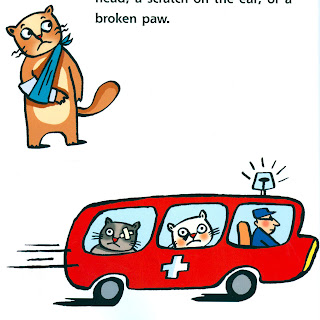 With so many cats injured, the town's rat population goes wild, and start ruining things for cats and humans alike. It gets so bad that the cats go to "his majesty the Cat King." (Not King Cat, so I don't think John Porcellino has cause to sue Satrapi over this or anything). 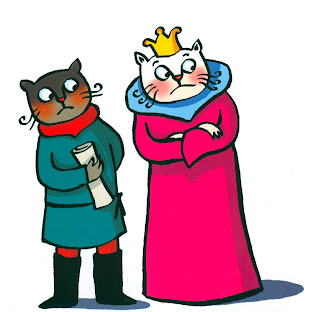 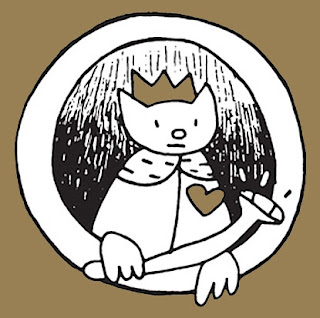 Once the Cat King explains the situation to Marie, she agrees to put the moon back, in exchange for a cat guarding her at night, since monsters are also afraid of cats. And now Marie and everyone else lives happily ever.

Well, except for the monsters.

And perhaps some neighbor girl who doesn't have a cat, whom the monsters will terrorize from now on...
Posted by Caleb at 3:51 PM

Awww. The red and blue monsters make such a cute couple...