There's a pretty good chance that the existence of, and quality of, Lora Innes' The Dreamer is something you're already aware of, and have been for quite some time. If that's the case, feel free to skip this post, as it likely won't contain anything you don't already know.

As many comics as I try to read—that is, all comics—there are some pretty significant gaps in my comics reading. Like webcomics, for example. I can read short, humorous ones about Ketel One-swilling cats or talking dinosaurs no problem, but I have little patience with serial drama or adventure in that format. It's not webcomics, it's me; I am a Very Old Man and a Luddite. So Innes' Dreamer, like most webcomics, wasn't something I could get into in its native format, even if I did glance at it and think "nice art" when I started hearing that there was this lady from Columbus—a 2002 graduate of the Columbus College of Art and Design—who was doing pretty great comics work.

Another sort of comic I pretty much never read? IDW's serial comic book-format comics. At $3.99 for 22 pages, they're just too expensive, and almost any series of theirs I am interested in I end up trade-waiting, despite how much I love reading comics in the 22-page, stapled format. So when IDW published The Dreamer as a six-issue comic book series, I missed that too, despite again hearing good things about it online and around the local comic shop

The eventual trade paperback collection, The Dreamer Vol. 1: The Consequence of Nathan Hale was released in July though, so I finally sat down and read it. And you know what? The Dreamer is very good comics.

It's not a completely transcendental, all-things to all-people, everyone-must-read-this-now sort of book or anything. And it's therefore not one I'd reccommend to anyone. But if you like shojo? If you like Young Adult fiction? If you like historical romance and teen drama and nicely drawn, very expressive, clean, open, fun, slightly cartoony artwork with a hint of Japanese influence? Then perhaps this is one that you must read now, at least. 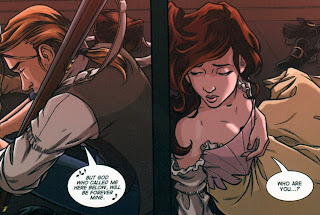 There's a blurb on the back from the website of Wizard magazine (which I believe is either a Harry Potter fanzine published by pop culture convention organizer Gareb Shamus) that says "The Dreamer reads like an excellent issue of Spider-Man Loves Mary Jane mixed together with the best parts of American history in one glorious conglomeration."

That's not quite it, and I suspect that appeared in Wizard simply because the editors had never read a Japanese girls comic (or, and I'm not sure if this is better or worse, assumed no one that reads their magazine ever has). It's more on the mark to say that The Dreamer and Spider-Man Loves Mary Jane share some of the same influences, in their visual look and their coupling of teen, school-based melodrama to some sort of fantastic element. (And hell, maybe it's not influence so much as coincidence; I doubt Innes sat down and decided she wanted to do a shojo comic, but to make it as thoroughly American as possible, and to ditch the visual tics of the stereotypical shojo comic. She may just have done a comic of the sort that has long been more prevalent in Japan than the states).

The title character is Beatrice Whaley, a 17-year-old high school senior who seems on the verge of finally achieving her years-long dream of going out with school quarter back Benjamin Cato...who just asked her out...while they were auditioning for roles in the school's production of Romeo and Juliet...! Complicating matters is that Beatrice has just started seeing someone else, albeit only in her dreams.

When she falls asleep, she finds herself in 18th-century America during the Revolutionary War. She apparently mysteriously also exists there—the people there know her, although she can't remember anything about her life there—and had some sort of relationship with the dashing, handsome Major Alan Warren.

Throughout this first collection, she travels between the two worlds whenever she falls asleep in one, and the intense dangers and higher stakes of the dream world or real past being to make her 21st century problems seem more trivial as she increasingly realizes the dreams are too real to be just dreams.

And that's the premise—a modern teenager in love with two young men in two different centuries, trying to make sense of her two lives as they exist independently and if and how they relate to one another. There's obviously some high, even teen angst-y, drama moments, but the work is charming—the mood is often light, and despite the real dangers and stresses of the past, the mood is one of only occasionally dicey adventure, not one of horror or War is Hell-ism.

I really loved it, and if Young Adult fiction, shojo comics, teen melodrama and/or American history are among your things, you should probably give it a look. You can check it out online here, but I think you should probably buy the trade (or ask your local library to buy the trade so you can borrow it). That way IDW will sell more copies, and then hopefully print another trade so the webcomics-adverse like myself can continue to follow Beatrice.

BONUS: This also happens in The Dreamer... 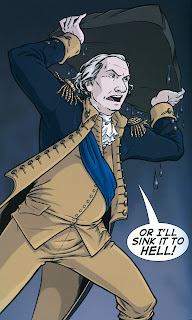 I swear this is the plot for an episode of "The Outer Limits"...