Hulk Vol. 2: Red and Green is a very strange collection.

I didn’t exactly have high hopes for Hulk Vol. 2: Red and Green. Jeph Loeb wrote it, and his entire bibliography tends to range from fair on the high end to The Worst Comics Ever Written on the low end. I had read the previous volume, and it wasn’t very good (Though not terrible either; I was actually sort of pleasantly surprised that it seemed to be Loeb writing in his Superman/Batman cameo-and-splash pages mode, instead of Mark Millar-but-even-dumber Ultimates mode).

So I didn’t expect Red and Green to be a good comic, but I was completely unprepared for how strange a comics work it is.

It make very little sense, and not merely in the usual this doesn’t obey the rules of good fiction or narrative structure or “Holy shit, they are paying this guy real actual American money for this?” sorts of ways, but even at the most basic, structural level, I was confused by the book.

The fine print on the title page says the trade collection I borrowed from the library “contains material originally published in magazine form as Hulk #7-9 and King-Size Hulk #1.” I only went back and checked that because the book seemed composed entirely of 8 to 11-page mini-stories, each set apart by a new cover image and brief introduction or title and ending with a cliffhanger or climactic event.

I thought that perhaps the chapters only seemed short given Loeb’s tendency to put as few panels as possible in his scripts, but when I went back and counted the pages of the segments, they did indeed turn out to be the length of back-ups, rather than 22-page feature stories.

I’m not sure how this book was put together exactly, or what its source material—those comics “originally published in magazine form”—actually looked like, and that ended up being just one more thing for me to puzzle over why wading through Red and Green’s 120 ponderous pages.

The volume opens with Loeb’s usual Chris Claremont-style first-person narration, from a character telling us, “My name is Bruce Banner. I am THE HULK.” He spends a few panels telling us all about the extraordinary security measures SHIELD has taken to keep him calm and unable to turn into the Hulk and/or escape his cell. He will narrate the first mini-story of the book, despite not being present during it (which he at least notes; his narration is his attempt to reconstruct the events).

I was shaking my head by the second page, during the course of which Loeb has Banner say: “THIS Hulk does things I never did. Like using a GUN. Which I’ve done.”

How can those three sentences be strung together like that by a grown-up? How can an editor or six read it, and a letter put it on the page? My mind was boggled and I was sputtering to myself on page two. I still had 118 to go.

In this story, the Red Hulk makes camp somewhere in the frozen north (despite a bunch of place name-dropping, Banner never tells us where “there” actually is), and is attacked by The Wendigo, a Marvel monster probably most famous for being in the issue of The Incredible Hulk in which Wolverine was first introduced.

Actually, Banner notes, this is a Wendigo, not The Wendigo. (This will be important later on). Where do they come from? Dr. Banner explains that they are: “Mystical creatures born out of humans who feast on…human flesh. CANNIBALISM.” (Yes, he actually, redundantly adds the all-caps “CANNIBALISM” there. The narration, by the way, is being written on a yellow legal pad by Banner, and appears in little narration boxes that look like squares of yellow legal pad paper with handwriting on them. That means Banner occasionally writes words in all-caps like that. And that he actually wrote out “…” before writing the words “human flesh” in the above sentence. This is only page three, and Red and Green has already become awesomely terrible. That is the secret of Loeb’s success, I guess).

The Red Hulk butchers the Wendigo with his Hulk-sized hunting knife and jumps away, leaving the pieces of his foe’s body to be devoured by a pack of Wendigos. In the last panel, the unidentified General Ross—who won’t appear again in this volume—sits at his desk looking grim, and the word “Soon…” appears before him. That is the end of the story.

And you know what’s weird? It’s drawn by Arthur fucking Adams, so it looks great. Adams is a nee plus ultra of monster drawing, and his Wendigos are incredibly detailed, scary and fluid. It’s kind of shocking that Marvel would hire Adams to draw one of their books, and then give him a script that everyone involved should be embarrassed to have their names attached to, and that he’d accept it. And then he’d proceed to draw the hell out of it.

The next story opens with Bruce Banner in Las Vegas suddenly, his escape or release from the prison in the last story not only unexplained but unmentioned, on the trail of the Red Hulk. He hears screams, and heads into a mythology-themed casino, and Adams draws this splash page: 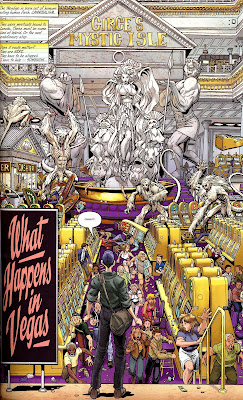 Jesus, look at that. Look at the detail there…the differing expressions on the faces of the Cyclops statues, the care with which Adam lined up the slot machines, the little details like the arms of the dead hanging over the edges of the fountain, the number of panicked extras, the way the Wendigo on the far right casually tosses a slot machine with his right claw while reaching toward a terrified victim with his left.

This is a really nice splash page, made even nice still by the fact that too few artists even bother to draw enough to fill-up splash pages anymore. Later in the book, Frank Cho will squander double-page spreads on nothing more than a half-dozen characters posing in front of a blank background.

The entire Wendigos going ape-shit in Vegas storyline looks this great, by the way. The story isn’t just an insult to its readers, it’s a punch in their faces, but hell, Adams just about redeems it with his work.

How did this pack of Wendigos get to Vegas, which is, after all, quite a ways away from the frozen wastes of Canada? That goes unexplained too. Somehow they are in a Vegas casino, apparently passing Wendigo-ism on to their victims, and Bruce Banner, who is also somehow there, must stop them…which he attempts to do by randomly turning into the gray “Joe Fixit” version of the Hulk for some reason.

Then New York-based superhero Moon Knight randomly appears and starts fighting The Hulk. Then The Sentry and Ms. Marvel appear. Then the gray Hulk turns into the green hulk. Then he turns into this: 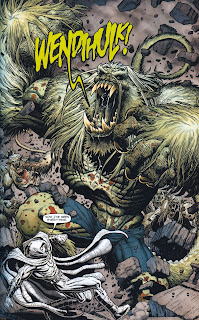 It’s all completely random and aggressively, insultingly stupid, right up until the one and a half page appearance by Brother Voodoo, who simply magics everything back to normal, ending the storyline.

I did snicker at that Wendihulk splash, and, as I read it, I could kind of see what some people must find appealing about Loeb, beyond the fact that the brand of stupidity he writes is often so very funny. There’s certainly an appealing craziness to the Hulk just randomly becoming a Wendigo for a few pages, and calling himself the Wendihulk.

But were all these other pages really worth that one, single-image burst of zaniness? The rest of the story didn’t really have anything to offer aside from Adams’ always appealing line work. 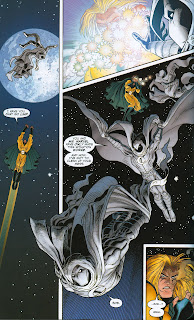 That’s the end of that storyline, and Arthur Adams’ involvement with the book. He’s replaced by another exceedingly talented artist, Frank Cho, and Loeb seems to have written a storyline specifically for Cho—it consists of nothing more than random Marvel superheroines fighting the Red Hulk, giving Cho the opportunity to draw just pages and pages of asses.

There’s an eight-page segment that recounts the Red Hulk vs. She-Hulk scene from the previous volume, this time from Shulkie’s point-of-view. It ends with the words “The Beginning…”

The next chapter finds She-Hulk calling superheroines from a list and trying to recruit them for an all-girl assault on the Red Hulk. Why is she only calling women? Well, because Cho likes drawing women. There’s no in-story reason given, because it’s not really a story…it’s just Cho drawing women, with Loeb writing terrible dialogue over the pictures.

The only two she can successfully recruit are Valkyrie and Thundra, shown here with SHIELD Deputy Director Maria Hill, who, it turns out, is actually a hobbit: After She-Hulk declares “Let’s go spank some red ass…” on a full-page splash, the trio track down the Red Hulk and engage in a violent battle full of gross dialogue. Then, just as the Hulk has them on the ropes, all the random heroines that all turned She-Hulk down earlier all appear.

Spider-Woman! Invisible Woman! She-Hulk! Tigra! Even Hellcat and Black Widow, who can’t possibly add anything! Why did Invisible Woman leave the rest of her rather powerful teammates to come alone? Because they’re boys, duh!

Here is some more actual dialogue that Jeph Loeb was paid to write:

"A waffle house of witches. Which one of you puts on the waitress uniform-- --and serves me? GOOD THING I BROUGHT MY APPETITE!"

They defeat the Hulk, and proceed to spend the night waiting for him to revert back to whoever he is when he’s not the Red Hulk. He never does, and eventually wakes up, grabs Thundra, jumps away with her, recruits her for something, and then the story ends.

It’s followed by one more, much shorter piece, “The Death and Life of The Abomination,” which is a recap of the Abomination’s fictional history, presented as a report from an unseen General Ross and illustrated by the great Herb Trimpe.

So the creative roster for this book? Jeph Loeb. Arthur Adams. Frank Cho. Herb Trimpe. One of those guys doesn’t seem to belong on that list, and the reason why isn’t simply that he’s not an artist.


RELATED: Here’s a typical “look at all those asses” panel from Cho’s story:

I like the fact that Storm says she lost her phone. No wonder! Where would she put a cell phone? Did she try putting it in her pocket, forgetting that she wasn’t even wearing pants, and thus it just fell to the ground before she flew away?
Posted by Caleb at 8:08 PM

Hulk #7-9 actually had the two stories running in each issue with each taking up half of the comic.

GOod review, pointing out the mindnumbingly awfulness of the comic without any of the hatred that regular readers (who continue to buy the book, for some reason) can't help venting.

i bought those original "magazine form" issues simply on the basis that frank cho and art adams were drawing the stories!

i still had no clue what was going on but with artists like that on board loeb could've handed in any script he wanted and it would've sold. i think marvel knew that.

This is a very funny and insightful review.

I've continued to buy "Hulk" every month since it started, despite my ever-increasing awareness of how ever-increasingly stupid it is. The art has definitely been a factor, but at this point I think I keep coming back just to see what amazingly dumb idea Loeb will come up with next.