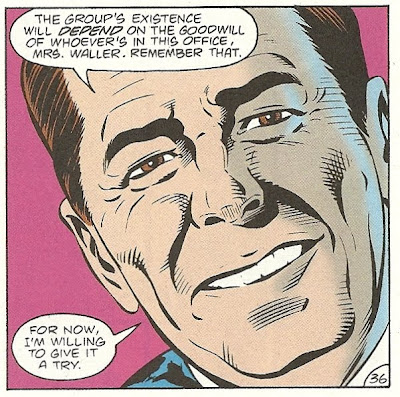 I finally got a copy of Suicide Squad Vol. 1: Trial By Fire, the long-delayed collection of DC's fan-favorite 1980s action/espionage series by writer John Ostrander. I've read much of it in bits and pieces out of back-issue bins over the years, but generally out of order, and with months or years between issues—not the best way to read a serial comic book.

Reading the first eight issues (plus Secret Origins #14, which serves as a sort of bridge between the Squad's first appearance in Legends and the start of their monthly ongoing), I was repeatedly struck by how far ahead of its time it seemed—or, perhaps more accurately, how far behind Suicide Squad the current time is (in terms of Big Two super-comics, anyway).

If you look at the Marvel Universe comics over the last decade or so, for example, one can see that a great swathe of them have been mainly concerned with telling the same sorts of espionage and political intrigue in a continuity-lade, fantasy superhero setting that Ostrander and company were doing in 1987 (Brian Michael Bendis' Secret War for example, or Secret Warriors, or Secret Avengers; bits of Ed Brubaker's Captain America run and Matt Fraction's Invincible Iron Man; read one way, the entirety of the Civil War/Secret Invasion/Siege cycle of events was bascially little more than the story of who was in charge of SHIELD).

DC's tried recapturing this particular type of lightning in bottles over and over over the years, but nothing ever really caught on.

One of the many, many striking elements about the series I noticed while reading this book, in fact, the very first one, was that Ostrander and artists Luke McDonnel and Dave Hunt just straight up used President Ronald Reagan as one of the main characters in their first story, "The Secret Origin of the Suicide Squad" (From the aforementioned Secret Origins special).

The entire premise of the story is a meeting, which sounds deadly dull and like the sort of thing that Bendis might do in a random issue of one of his Avengers issues, but there are generous cutaways into flashbacks, with the meeting action in the premise merely the springboard for telling a 40-year story of the Suicide Squad.

The meetings participants are Amanda Waller, who is pitching a revamped version of the Squad, Sarge Steel and Reagan. There's no obfuscation about the president's identity, either. He's there, he's asking questions, he's making decisions, he's reacting to what he's heard, he's a character. 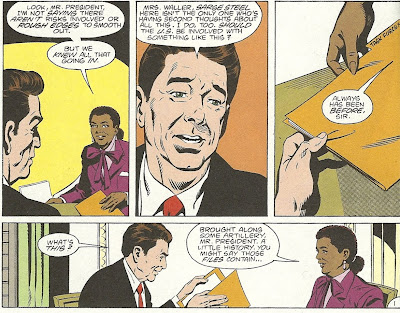 That's a pretty sharp contrast to the way presidents are generally handled in Big Two comics today. DCU presidential history split off from that of the real world in the 2000 election, when Lex Luthor was elected president, Pete Ross finished his term, and then a fictional president or two held office. DC's US never had a George W. Bush or Barack Obama in its White House.

Bush and Obama and some members of their cabinets have shown up in Marvel Comics, but generally in safe, oblique ways, where they are so highly fictionalized that it barely matters who they are. President Obama acts just like President Bush I or Bush II or President Taft; whatever the story calls for. (Obama did get plenty of face-time in a particular issue of Amazing Spider-Man, but that was sort of a gimmick election collectible, not really a Marvel Universe story).

While it was strange to see so many drawings of Ronald Reagan, not with his head just out of panel, or a carefully positioned plant or deep shadows obscuring his face, but sitting there on-panel in a brightly lit office, it was even more strange that Ostrander made some effort to portray him as the real Ronald Reagan.

At two different point, Amanda Waller, who apparently works for a Democaratic congressman, makes remarks about Reagan's politics, which he responds to by gently chastising her to stay on-topic, with a, "Now, now..." 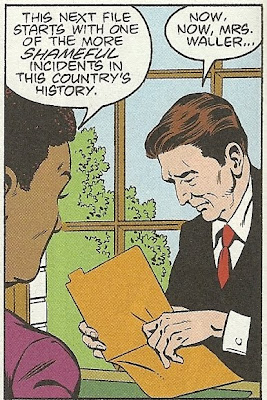 The "shameful incident," revealed in the next two panels, is, of course the McCarthy hearings and "Red Scare" period that, in the DC Universe, also targeted costumed superheroes.

The result was that the members of the Justice Society of America publicly declared their intention to retire from crime-fighting in lieu of revealing their secret identities.

Reagan was a friendly witness in the House Un-American Activities Committee hearings seeking to root out the perceived/feared influence of Communism in Hollywood.

Later, when discussing her own background, Waller says this to the president:

The meeting ends with Reagan giving his conditional approval of the project, and, when Waller leaves, Ostrander even assigns some less-than-noble motivations to his Reagan. 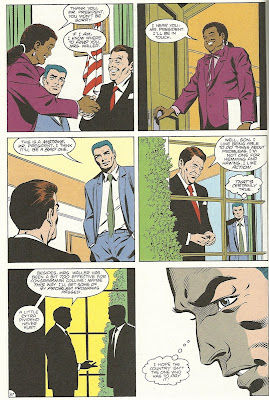 I'm not exactly sure what's changed between 1987 and the 21st century that made it more permissible for DC Comics to use real, public figures in their stories back then—the increasing litigiousness of our culture? Easy access to mass communication making it easier to offended parties to make a lot of noise? The fact that more people seem to pay more attention to comics, and that it doesn't take much to generate negative publicity these days?—but the story was in sharp contrast to, say, 2008's DC Universe: Decisions, in which a slate of made-up candidates campaign for the presidency of the DC USA.
Posted by Caleb at 7:38 PM

You think this is crazy, you should read the first Deadman arc from Action Comics Weekly, where Deadman and another ghost jump around a room full of people, finally ending in a fight between Gorbachev and Reagan.

I think what changed is a need for "timelessness" in comics pushing out the public figures. That being said, Greg Land would be perfect for a book based on a president, much like the one Joe Casey pitched to Marvel in 2008.

Late 80's/early 90's Marvel also has some examples of this kind of thing: serpent Reagan in Captain America and George W. (and Thatcher if I remember right) appeared in a Nicieza issue of Avengers.

Yeah, I think it's the floating timeline problem. I could imagine lawyers getting spooked by the Tony Twist "right of publicity" case against Todd McFarlane, but if so, they're nuts. As the Bluewater bios and the endless Sarah Palin comics show, the right of publicity pretty rarely applies, and basically never applies to public officials.* Simply depicting Reagan like this is no more legally problematic than Doonesbury.

But the floating timeline means that references date incredibly quickly. If DC still has, say, a 16-year modern timeline (and I don't think they've ever admitted it to be longer than 13), then this scene has to have happened in 2003 or so.

(IIRC, not only did Suicide Squad stay current with things like the end of the Cold War and developments in the Soviet Union, but it also shifted to depictions of George HW Bush in due course.)

*But see the Schwarzenegger bobblehead case-- if you were a celebrity with a right to profit from your likeness before you were elected, you have at least a plausible enough claim to retain it after election that you can force a favorable settlement.

You think this is crazy, you should read the first Deadman arc from Action Comics Weekly, where Deadman and another ghost jump around a room full of people, finally ending in a fight between Gorbachev and Reagan.

I did! I've been blogging my way through those old ACWs, but it's been a while since I've done one. Where I left off (blogging) Deadman just got invited to that party.


Yeah, I think it's the floating timeline problem.

Good point. I know that the "Bloodlines" crossover event took place during the Clinton administration, which would put Tim Drake in his late twenties.

This will be an eternal problem for DC insofar as they keep the JSA around, and it's kinda weird how specific this Suicide Squad story was—the JSA didn't just disband after the war or in the fifties, but in 1951 exactly.

This is way off-topic, but I think the eternal, almost insurmountable problem with Wonder Woman is that she was created to be inextricably linked to WWII, and thus doesn't "float" as well as Superman and Batman....

Interesting thought about Wonder Woman, but Captain America doesn't have the same problem and he's more tied into WWII than any other superhero.

...but Captain America doesn't have the same problem and he's more tied into WWII than any other superhero.

That's true, and I guess I've never really sat down and thought about why it works for one and not the other.

I would guess it was because Captain America basically took 1945-Whenever He Gets Defrosted off, and was taken off the board for decades. So while his origin is tied to WWII, he's simultaneously a contemporary of the "current" generation of Marvel heroes, and fits into their sliding timeline as a peer of Iron Man and Spider-Man and whoever.

Wonder Woman's in a more difficult place because the desire seems to be to associate her with Batman and Superman as a member of the "current" generation of heroes, who would have debuted "10-15 years ago," no matter what year the calendar says, although her real-world creators created her as a WWII combatant. In that respect, she seems to have more in common with Jay Garrick and the old man JSA guys, but they're decidedly second-class in the DCU hierarchy. (Also, that would maker Wonder Woman and older, more experienced hero than Batman and Superman, instead of their peer).

Maybe in her next reboot SHE should get frozen in a block of ice for a few decades, and the Justice League can defrost her...

thanks for posting this. The Suicide Squad is awesome!