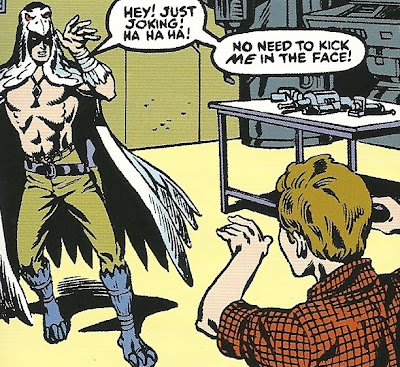 You said it, Raptor!

A popular reaction to the death of a famous or important person is the cartoon where they meet St. Peter at the gates of Heaven. I was particularly interested in how cartoonists by riff on this with Hitchens, an eloquent and outspoken atheist.

I didn’t find a Hitchens gallery there, unfortunately. 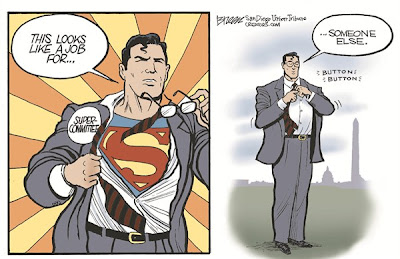 I haven’t really read anyone writing about reading comics on their phone before—not because no one’s ever written about it before, but simply because I’m not really interested—but I thought this piece by World’s Greatest Letterer Todd Klein was an interesting read.

Because of his age (older than super-old-fashioned, Luddite Caleb) and because of the years he’s spent making comics (with the understanding that they were ultimately going to be read on paper), Klein probably doesn’t fit the demo for people who might be inclined to read comics electronically on their phones, so his is an unusual perspective, I would guess.

I watched the new Batman movie trailer when I woke up at 3 a.m. one Tuesday morning before going back to bed.

I had insane Batman related dreams afterwards (which may or may not be related). Batman’s Rogue’s Gallery was in my bedroom at the house I grew up in, chasing around Robin, Nightwing and Batman, and Batman used that flock-of-bat-summoning device from Batman: Year One to summon all these bats that streamed up the stairway of my house and started eating the villains, including one giant, monster bat. There was a house on my street whose roof was full of corpses. The Joker's dad was this giant, muscular warlock who commanded a big 300-style army of shirtless ancient warriors. The He-Man bad guys teamed up with the Batman villains.

I guess my subconscious liked the trailer...?

I don’t know. I haven’t been too terribly enamored with Christopher Nolan’s Batman movies in general, certainly not as much as many of my fellow comics fans. This one looks a little more intriguing than the previous ones due to how…strange it seems, with Bane as the villain and Batman coming out of retirement or some such.

The scene with the football player looked pretty dumb.

Knowing that there's going to be at least one al Ghul in The Dark Knight Rises and that Bane is the villain, and that this is the concluding part of a trilogy that began with a movie in which Ra’ al Ghul tried recruiting Batman to his quest, I wonder if Nolan and company are taking some of their inspiration from the 1996 Batman comics crossover storyline “Legacy” and Chuck Dixon, Graham Nolan and Tom Palmer’s 1998 miniseries Batman: Bane of The Demon, which dealt with Ra’s and Bane forming an alliance, as the former considers the latter a more appropriate protégé than Batman.

Bane’s design in the movie looks kind of dumb, but Bane’s design always looks kind of dumb, in the comics, in the other movie he appeared in, in the various cartoons he’s appeared in… I wonder after his weird face get-up though. It sure makes him hard to hear, but then, it was only one line, and Christian Bale’s Batman has been hard to understand for two whole movies now, and that hasn’t affected the box office performance…

“Ponzi scheme”…? That word? I don’t think it means what Tom Brevoort thinks it means.

Wow, this “Batman and the History of the Bat-Suit” infographic thingee that Bejamin Andrew Moore made is pretty great.

If anyone cares, the “Troika,” “Year One” and “New Batman Adventures” costumes are my favorites (And “Batman Inc” and “New 52” are my least favorites, of the comic book suits. Most of the movie suits are, of course, awful).

What are your favorites…?

Wait, the new The Hobbit film doesn’t come out until next December…?!

The trailer looks pretty awesome, and it was really exciting to see Ian McKellen’s Gandalf again. I’m super-curious about how this movie is going to work out, as they seem to be messing around with it a little in order to get some characters from The Lord of The Rings films into it, and overall the tone of the book is much more lighthearted and even, at times, silly compared to the tone of the trilogy. They certainly seemed to have a bit of humor in the trailer; will they have to butch up the battle scenes to please LOTR film fans, I wonder…?

My first reaction after watching the trailer was, “Oh man, I hope they show Smaug and the giant spiders in the next trailer,” and then I remembered they were splitting the book up into two movies, and neither Smaug nor the spiders would be in the first one. (Fuck.) Well at least with this version they should be able to fit in Beorn, who was excised from the 1977 animated version for space.

And hey, speaking of Hobbitses, my comic book My Pet Halfing has one, and is chockfull of hobbit and Tolkein jokes! If you haven’t read it yet, and the number of copies I have in a dusty box in the back of my closet tells me quite a few of you haven’t, here’s my original announcement of it, and here’s a post with a six-page preview. I’ve updated both posts to include my current address.

Eh, I'm a fan, and always want to root for the guy, but I never felt defensive about it.

I think Peter David and Grant Morrison both had good takes on Aquaman. Paul Dini and Alex Ross did too, in their treasury-sized Justice League story, and in Ross’s Justice miniseries.

Just do good stories featuring the character, being cool, rather than talking about how cool he is, or overreacting to perceived misunderestimation.

Aquaman quietly beating down Power Ring in Morrison and Frank Quitely’s JLA: Earth-2 graphic novel, or appearing on the back of a blue whale jumping out of the ocean in his first appearance in Morrison’s run on JLA, or that scene in Brian Azzarello and JIm Lee's Superman, where Aquaman assembles an army of fantastic sea creatures just to stare down Superman…those panels or sequences are all worth thousands and thousands of words of talking about how Aquaman is actually cooler than the kids you went to grade school with might have thought he was at the time.

I think it's even easier to prove Aquaman’s worth in Justice League comics than it is in his own title (Johns’ is currently writing both Justice League and Aquaman), where Aquaman doesn’t really have to do or say anything to prove his worth; he just needs to show up and stand around next to Superman and Batman. Like, if Superman and Batman are cool with Aquaman and consider him one of The World’s Greatest Heroes, who am I to argue?

I do miss Mike Sterling’s words, but I’d be lying if I said wasn’t enjoying the hell out of his holiday hiatus strategy for Progressive Ruin: Simply showing panels of Swamp Thing fighting stuff.

It’s that time of the month again: Marc-Oliver Frisch’s analysis of the available month-to-month sales data for DC Comics!

Give it a read, and make sure to stick around for the comments, which are a lot more contentious than usual, and feature several retailers leaping to the defense of DC’s New 52 sales strategy as a whopping success.

With this month’s installment, Frisch has some more substantial analyses than usual, regarding which of the New 52 seem to be hanging on to their audiences in relation to others.

I was especially interested in his assessment that it didn’t bring a lot more, new readers into comics (at least not into the shops to buy the paper comics, based on the charts; digital is still an unknown). It didn’t seem like DC was really all that serious about this anyway, given the fact that all of the titles were created by the same group of creators that did the pre-New 52 DC Comics, with the few exceptions being guys from old Marvel superhero comics and a guy from an Image superhero comic. There was also a noticeable retrenching of the tone and address of the books, which was the same as it was before the relaunch (if it changed in anyway, I think it got a little grimmer and a little more Marvel-like), as opposed to something more general or mass audience friendly like, say, the tone of DC’s suite of animated series from the last decade or so. 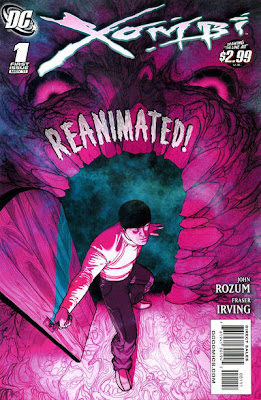 Someone in those comments brought up Xombi, the critically acclaimed but extremely short-lived series by John Rozum and Frazier Irving that launched in the spring of this year and was canceled by issue #6. What if DC held off a few months and launched it with the rest of the New 52, it woulda been a monster hit, right? And given it’s subject matter, if it were released with the rest of the “Dark” sub-line that includes Animal Man and Swamp Thing, it would probably have done even better than a good handful or three of the New 52.

Strange that DC launched it when they did. I guess it’s because so few people at DC seemed to know the relaunch was coming even a few months before it came, but, if that was the case, why didn’t they just relaunch Xombi a la Batman: The Dark Knight, another title that had just begun prior to the relaunch? 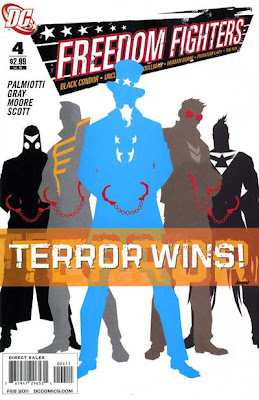 Reading through the Quality Companion, which I mentioned yesterday, I got to thinking about DC’s most recent Freedom Fighters series, this last one an ongoing by writers Jimmy Palmiotti and Justin Gray, who wrote two long miniseries featuring the characters first.

It was (predictably) canceled after this summer, after just nine issues.

What if it were a success, what would DC have done about it? Would they have had to cancel it anyway come September, given that it is based on the old continuity, in which superheroes were around since World War II, rather than the new continuity, in which Superman was the first superhero, and he debuted just five years ago? Was it canceled due to low sales or, like the two JSA titles, did it simply not fit in with the newer, younger DC Universe…?

For a few seconds I wondered why DC didn’t try to launch it as a New 52 title—Grant Morrison and then Palmiotti and Gray had invented brand-new versions of a lot of the characters that didn’t necessarily have all that much to do with the predecessors—but perhaps there just wasn’t much interest in the characters divorced from their place in DCU history.

It’s writers did just launch a Ray series though, which is even newer than The New 52.

Finally, if you haven’t been keeping up, here’s a post in which Tom Spurgeon provides links to the dozen holiday interviews he conducted this year. A lot of great conversations with a lot of great folks; I particularly enjoyed the Tucker Stone one, although they were all quite welcome reads during this way-too-slow couple weeks in the comics blogosphere.
Posted by Caleb at 6:37 PM

According to Rozum, Xombi was always planned to be only 6 issues by DC. DC not telling you this was supposedly just some kind of stealth move to cover up the New 52's imminent arrival (and why they didn't launch any other new books in the first half of 2011.)

Wow, that's damn peculiar. Thanks for sharing; I had not heard that previously.