month of special variant covers on many of their books, similar to the Wolverine Art Appreciation varaints they did in 2009, featuring various artists homaging a particular classic work of art and sticking Wolverine in the middle of it. The Beat has a bunch of 'em up here.

I liked a whole lot of the Wolverine ones, and ended up buying the Wolverine Art Appreciation #1 gallery special, which was just a comic book collecting all of the covers together.

As with most gags, it seemed a lot funnier the first time then it does upon repetition. And that might have something to do with the fact that Wolverine is an inherently more alien—and thus more amusing—character to stick in classic works of art, unlike, say, Black Widow or Thor, whose visual design are simply that of very attractive people, one of whom is already a mythological figure that often appears in art anyway. 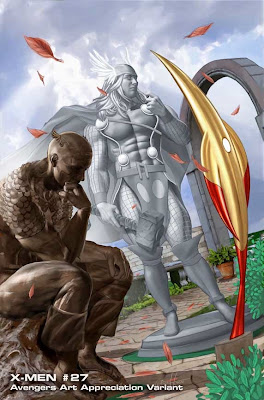 The fact that Thor is not nude and you can't see his tiny little pee-pee ruins the would-be Michelangelo's David homage for me, I'm afraid. 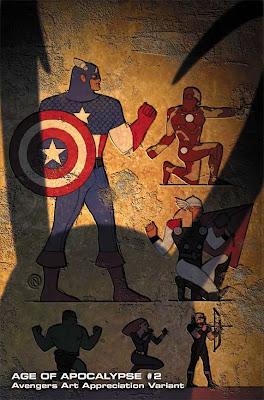 ...although suffers somewhat from having been done at least once before: 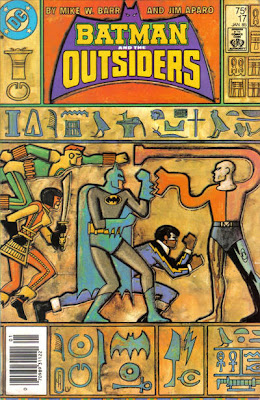 On a positive note, this one's probably my favorite: 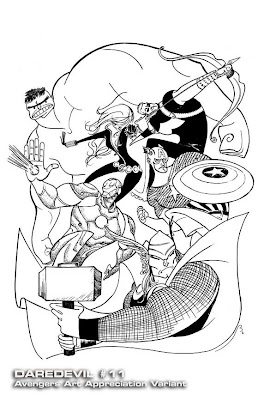 It's by Steffi Schutzee and, oddly enough, it's for Daredevil, which is also my favorite Marvel comic at the moment.

Were I Very Good Artist and Marvel asked me to do one of these, I think I would get a urinal, toss a couple of Avengers action figures in it, maybe scrawl "S. Lee 1963" on it, take a photo of it and use that as my submission.

That, or a nice painting of Thor's hammer with the words " Ceci n'est pas une Mjolnir" in cursive below it. Or would it be funnier in Nordic rather than in French, and in runic-looking type instead of cursive...?
Posted by Caleb at 8:20 PM