I only bought two comics this week at the shop, for the regular reasons that I am poor, too many comic book-comics are over-priced and trade-reading seems much more rewarding. But! Of those two comics, written by different writers and published by different publishers, both featured fantasy technology which characters compare to the black box on an airplane. Weird. 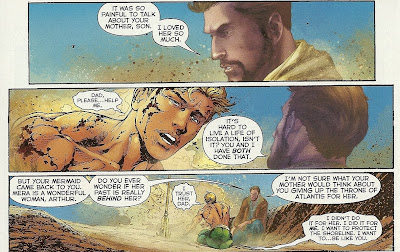 Aquaman #5 (DC Comics) After reading Abhay Khosla's post about an essential difference between the Geoff Johns-written Flash and the Francis Manapul and Brian Buccellato-written Flash, the one in which he looks around at all of the superhero comics in which the superheros battle their own misconceptions about their parents and wonders if perhaps we've entered the "Parent Bro Era of Comics", it was pretty impossible to read the above sequence straight, and not think about Khosla's post.

It is, after all, written by Geoff Johns, and features Aquaman talking to a hallucination of his late father, about his mom and why Aquaman has made the life choices he's made up to this point, none of which we've been privy to, as the character was recently rebooted, and so there's only about four-and-a-half issues of Aquaman in which we can have observed his life choices (Mostly they seem to involve being an a-hole to surface-dwellers for not kissing his ass hard enough, and whether its okay to commit genocide if one feels pretty broody about it after the fact).

This issue, by the regular, still-hasn't-needed-a-fill-in creative team of Johns, Ivan Reis and Joe Prado, Aquaman ends up in a desert after fighting some mysterious, possibly Atlantean foes in a flying craft. There are a few bits of it that reminded me a little overmuch of Superman—Johns seems to be writing Aquaman as the Superman of the Sea, doesn't he?—or perhaps, more closely, a scene in the original Star Wars.

Aquaman's new level of superpowers continues to amaze me. We have so far seen that he's bullet-proof (although he does take shrapnel in this comic, so I guess he's not impervious to chunks of flying metal that haven't been shot out of guns) and is able to leap tall buildings in a single bound, and survive the fall to earth that results.

This issue, we learn that not only does he have hearing more advanced than that of human beings, but he has super-hearing almost as powerful as Superman's! 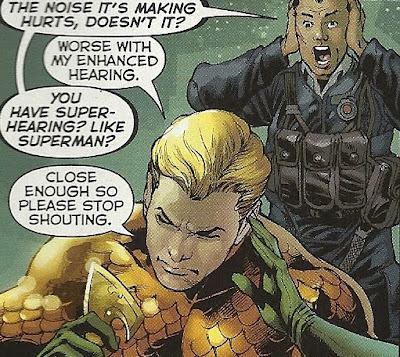 It seems that not only is New 52-Aquaman more powerful than ever before, but New 52-Superman is weaker than ever.


Captain America and Bucky #626 (Marvel Entertainment) In this issue, the elderly Bucky II has a flashback, Captain America fights a Bucky robot, the most obvious thing concerning the mysterious new character that can happen in the story happens and Ed Brubaker, James Asmus and Francesco Francavilla continue to bide their time until the book gets relaunched in a few months.
Posted by Caleb at 7:35 PM

Aquaman still isn't a very good book, but you have to give it up to Reis for being that good that consistently. The guy draws his ass off every month, and he doesn't seem to much of a photo-referencer either.

Well, actually Aquaman has pretty much always had enhanced senses, just too many writers (and readers) seem to forget them. He has to see better than us to see in murky water (not to mention the darkness of the ocean depths). Also he would have to have at least more efficient hearing to make out what fellow Atlantians are saying when they speak underwater. :)