If you weren't reading my blog all weekend because, I don't know, you have some sort of life of some kind, you may have missed a few big-ish posts. But don't worry, I'll link to them here: On Friday I discussed DC's announcement that they would be canceling six of their New 52 and replacing them with six new series at some length, on Saturday I discussed the proliferation of Batman series over the last few years by looking back at a one-time Batman assistant editor's discussion of how big a decision adding a third Batman title was and on Sunday, well, that post wasn't exactly very substantial. Over on ComicsAlliance, however, I had a link-filled post summarizing the previous week of CA coverage, which is a good way to get caught up if you missed a day or two of CA reading.

Some 25 years ago, David Bowie famously turned to a group of goblins and quizzically stated, “You remind me of the babe … The babe with the power!” If comic publisher Archaia has anything to say about it, we may finally learn what on earth he was talking about.

Gartler apparently never saw The Bachelor and The Bobby-Soxer. He should. Everyone should! It's a pretty great Cary Grant romantic comedy, co-starring beautiful Myrna Loy and a 19-year-old Shirley Temple.

The Atomic Fireballs do that sequence in their song "Man With The Hex" on the soundtrack to the live-action Scooby-Doo movie, too..it plays during a chase scene at the club...

It is inappropriate to breastfeed seven-year-old children. I don't know that it's inappropriate for them to maybe see breastfeeding occurring somewhere though. I guess Dave Dorman doesn't agree...or he didn't last Monday. That's cool. He's free to think what he likes, and say what he likes, but everyone should beware of saying stuff in public in general—you might have a whole bunch of people ask you to clarify your opinion, so they can decide if you're as dumb as you sound, and if you can't, well...

Dorman did eventually clarify it—or at least said he would clarify it—after the comics sites picked up on it (artist Fiona Staples seemed pretty gracious in her response).

The most interesting part of this to me was the fact that one of the things Dorman seemed to be objecting to was that Dorman wrote:

I find this image offensive, not only for promotion of a comic book, but specifically for a comic that Brian clearly states that he would like to see today’s younger generation pick up and read as he did when he was kid. Rather than a family-friendly heroic saga, this promo art is telegraphing to the world that it’s a series I cannot share with my 7-year-old son. Is the comics industry really so dead that they have to stretch to these desperate, shock value measures to incur readers?

It wouldn't take too many seconds worth of googling to find hundreds, if not thousand of more widely offensive images that comic book publishers put on the covers of comics for kids, often involving breasts.

This is probably my most recent go-to favorite example... 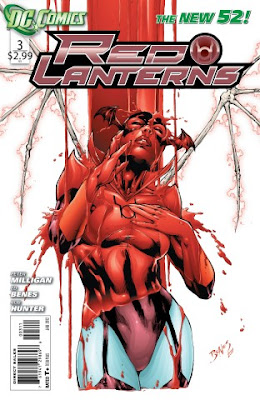 ... from Rated T+ for readers 16 and up title Red Lanterns, a spin-off of Rated T-for-Teen Green Lantern, inspiration for the PG-13 feature film Green Lantern, a whole particularly garish aisle of toys in Wal-Mart and Target, and a new Cartoon Network series.

Oh shit, I hope there's no traffic on that street, because that would totally make me slam on the breaks, veer wildly to the right and/or maybe totally freak out.

Via Tom Spurgeon, a Walt Simonson drawing of Gandalf.

Someone with some pull in the proper circles should announce some sort of "Draw Gandalf" day...

I blame the existence of Green Lantern Glo Balls.

I love it when Abhay writes at length about comic books. He seems to be only slightly joking when discussing what the current volume of DC's Flash comic is about; it seems super-obvious, but that's probably what most superhero comics should be about and, if the creators don't agree with some of those statements, then maybe they shouldn't be working on that character...? Just a thought.

Also, I wonder if Geoff Johns pitched the premise of Flashpoint as Abhay diagnoses it...? 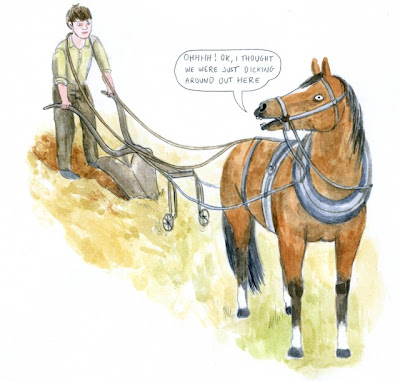 This illustrated review of War Horse by Lisa Hanawalt is awesome. Bonus? She mentions Casper Van Dien. I have a confession to make, something you don't know about me, but some of my closest friends and certain family members do: About six years or so ago I developed some sort of minor but weird form of Tourette syndrome (extremely minor, I should say, I don't mean to belittle an actual disease) where I uncontrollably recite the name "Casper Van Dien." I don't know what it is, exactly, but that names' been stuck in my head like a resilient pop song for years, and I can't help but say it out loud when talking to myself or around the house. True story!

Wait, if he fired his mouth, removing it from his face entirely, then how is he still talking?!

Here's TMNT fan and EDILW favorite Ross Campbell talking at some length about the 2007 computer-animated turtles movie, TMNT. Here's what I had to say about the movie the weekend I saw it. Almost five years later, the thing I remember most about the movie was how cool the ninja parkour teaser trailer for the movie was, and how I ultimately liked that better than just about anything that was actually in the movie itself. In fact, I like that trailer so damn much I think I'm going to go watch it right now.

I was all set to drop Captain America and Bucky, one of only two Marvel books I still read in monthly comic book format, when I heard that they were going to change the title again and change the focus again and the creators again...until I read that the next story arc would involve dinosaurs.

Still seems pretty disingenuous to have referred to—and to continue to refer to—Captain America and Bucky as an ongoing monthly comic book, or to have lead readers to believe the previous directions and creative teams were ongoing ones. In retrospect, it was never anything else than a series of miniseries strung together, with the numbers from the relaunched Captain America title retained for...some mysterious reason that eludes me.

Don MacPherson lucked out and found Warren Ellis and Kaare Andrews' Astonishing X-Men spin-off miniseries in a back-issue bin, for a $1-per-issue. He didn't like it as much as I did.

Wait, if Mark Millar's latest round of screenplays illustrated by modern comics masters includes a series that's going to be published by Image Comics, then how is the publication of these comics supposed to make The Big Two the Big Three or whatever...? How can the new "Millarworld" initiative rival the creation of Image Comics for importance if it's component books are being published by Image Comics...and Marvel Comics...?

Or was some of Millar's hype sort of illogical...? Nah, that doesn't sound right...

This is pretty weird.

Especially since Marvel seems to be so actively pushing readers towards reading their books in trade rather than in serial comic books with their $4/22 or $4/20 price points.

Of course, it could simply be a matter of the people who shop at shops Diamond supplies and want to read Marvel comics do so in traditional comic book format, while people interested in Marvel graphic novels get 'em through Amazon or big box retailers, which may or may not use Diamond (I think not though...anyone know for sure?)

Regardless of where people buy Marvel trades at though, is it weird how few of the ones that show up on that list are Marvel-Marvel titles...? Or does that just mean Marvel readers will read Marvel comics in comic form, but trade-wait stuff like the literary adaptations and the delay-plagued Icon books like Millar's...?

I already spoke about the DC cancellations and new series. Of them, the only two that really sounded very interesting to me were Batman Inc, which I suppose I'll read in trade (that was my plan with the previous volume of the series, although they canceled it before it was all ever collected into trades), and maybe Earth 2, although the strange continuity calisthenics it may involve kind of frightens me away, and writer James Robinson has kind of lost the benefit of the doubt I used to always afford him.

I do wonder where Batman Inc fits into the new post-New 52 continuity, as the reboot seemed to invalidate some of the elements that could be seen in the earliest chapters of Grant Morrison's Batman Inc story (Barbara Gordon is no longer Oracle, and seems to have been de-aged and to have maybe never been Oracle, Stephanie Brown is no longer Batgirl III and maybe never was, Batman and Catwoman no longer seem to know one another's secret identities, etc).

Editor Mike Marts was so coy in this interview, I still don't know if this is a continuation of Batman Inc or a reboot of it, and Josie Campbell didn't press him on the question.

Oh man, I was annoyed to hear that Daredevil, the other Marvel series I'm still reading, was going to crossover with Amazing Spider-Man. Now DD's going to cross over with two other titles I'm not reading? Jeez, Marvel tries sooo hard to get readers to drop their monthlies...

And people wonder why no one reads newspapers anymore...
Posted by Caleb at 6:43 PM

So many links! I can't get through them all in between classes.

As for Marvel trades, I follow the Amazon top 100 list for graphic novels, and Marvel never has a consistent topper like DC (Batman: the Complete Hush, Watchmen, etc...). It's a rare thing to see even one of them top. Myself, I buy a few Marvel floppies and use amazon and discount comic book service for cheap trades.