Review: The Power of Cute 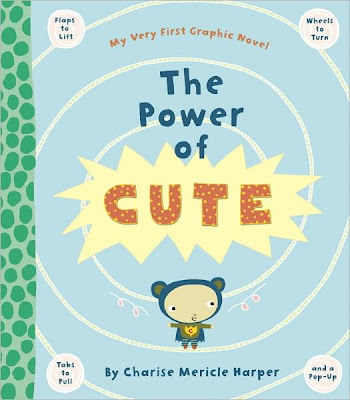 Here's a book I pretty much just stumbled across, its title making me think of James Kochalka's manifesto comic The Cute Manifesto, and the drawing of a cute little kid wearing a throw-together superhero costume consisting of fairly random elements appealing to me aesthetically.

Those elements got it into my hands, but it was the "My Very First Graphic Novel" that really sealed the deal; I don't think I've ever seen any thing sold as a "first graphic novel" for kids before, and was curious to see what that would look like.

It wasn't until I brought it home that I noticed that its author is Charise Mericle Harper, who was responsible for the picture book Cupcake (which I rather recently reviewed here) and the Fashion Kitty books, which I couldn't quite get into (I only read the first one), but I know two girls, ages 8 and 34, who love 'em.

This is a very cute book, and one I thought an awful lot about, but I don't think that "My Very First Graphic Novel" tag stands upon even a cursory examination, even if you use the most liberal definition of the term "graphic novel" to mean "comics, basically."

There are no panels in the book, not really. It's only 23-25 pages long (there's a fold-out section, so I'm not sure how to count that), which oughta knock the "novel" part out of there for sure, and it does have images and is thus, "graphic," but it's not comics, not really. There are no panels at all...unless one counts pages as implied panels, with the borders of pages serving as the margins of panels. But if we did that, it would open the term "graphic novel" up to mean a lot of picture books, even ones aimed at the youngest readers, and, unlike a lot of picture books for children, some of the dialogue in this book is presented as prose, appearing outside of a dialogue bubble.

So, formally at least, this is less of a graphic novel than, say, The Gingerbread Man Loose in the School or any of Mo Willems' Elephant & Piggie books.

What this book does have is "Flaps to lift, wheels to turn, tabs to pull and a pop-up"...and that gets us into some slightly more interesting territory.

The story is direct and simple, with a fun, funny twist ending, which I'm afraid I'll probably spoil, so feel free to go borrow this from the library, read it and then come back to finish reading this review.

A big, three-legged monster with a big mouth full of sharp teeth stomps down a path, where the cute little big-headed person in the awesome superhero costume is walking. The scariest thing about this monster is that he is mixing two different patterns, wearing plaid shorts with a polka dot shirt, but then, I don't scare easily.

Neither does our hero, who declares "I'm not afraid of you!" The reason being that our hero has "a SUPERPOWER."

The bulk of the book then involves the monster trying to guess the superpower. On the left-hand side of each two-page spread, the monster's words appear, "Are you superstrong?", for example. On the right-hand page, we'll see a cloud signifying the monster's imagination, and within it the image of the cute hero kicking the monster, who flies up into the air. 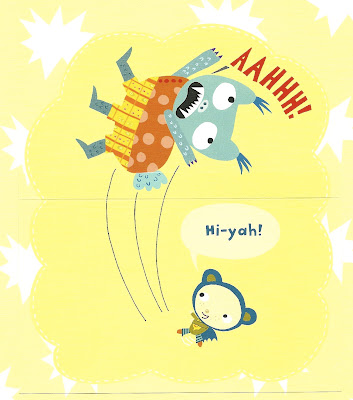 But that image is on a flap, and if you lift the flap, below you'll see what's happening right in front of the monster's eyes, rather than in its imagination: The cute hero standing on the path, saying "No." 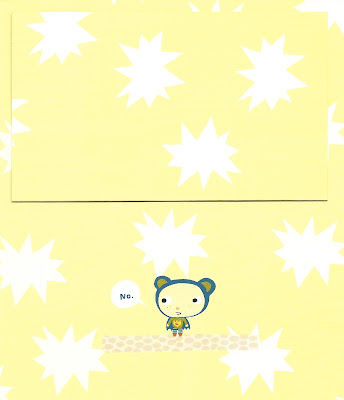 This happens a few time, with the most complicated being one in which the monster asks, "Can you run faster than a speeding train?" and on the flap is a dial you can push, which moves a cut-out image of the monster atop a train chasing the little hero around a circular set of tracks.

Our hero eventually reveals that the power in its possession is that of the title of the book in a very dramatic image that allows the reader to manipulate colorful, Steranko-like trippy swirls.

The power of cute is actually made-up of two complimentary powers: "First, I use my big-head-tiny-nose-and-mouth power...Then I sue my shrinking power...Now you're cute like me!"

And then...okay, I won't spoil it, but suffice it to say the superhero child defeats the monster by making the monster cute, and the surprise ending reveals something about the hero.

While there aren't any panels in the book, which I suppose I'd call a picture book instead of a graphic novel, despite what the cover says, there is a sub-set of implied panels within the implied panels the the borders of the pages form.

By hiding an image below a flap, Harper not only literalizes levels of reality within the narrative, but she manages to pack two moments in time within the same space, so that rather than two panels, or distinct story units made of pictures and words, sitting side by side, they actually occupy the same space simultaneously, one beneath the other.

Formally, it's a very smart usage of space. It might be like that because this is a book for very small children, and very small children like lifting flaps and turning wheels, but it's also story-telling form following story functioning in a pretty unique way...certainly unique by the standards of other books that call themselves graphic novels.

Here's a particularly strong example, from early in the book: 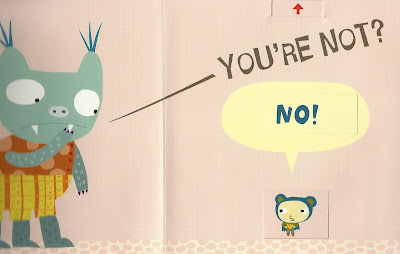 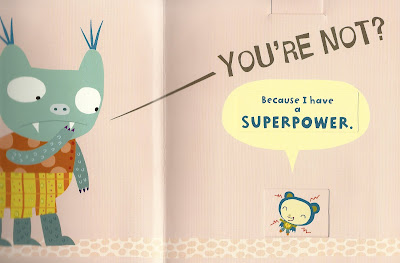 (Please note that the grayish quality of the colors here is simply a matter of the book not fitting flat on my scanner, so some shadow being cast over it. That background is a bright carnation pink, not the sickly salmon it looks like here).

By pulling the tab marked with the red arrow, the dialogue in the baloon and the image of the hero both change, while the puzzled monster continues to stare on, confused by the fact that this little baby isn't afraid of it, and its answers to its question.

There's a good three distinct story moments all put within this single two-page spread—or single "panel," the tab allowing for it to function as two panels.

This one is a lot like those panels you'll see in comics where the artist will have someone stare blankly at someone else, usually for comedic effect, and they'll draw the same panel twice, with only slight alteration (Well, these days they'll probably trace the panel the second time, or cut-and-paste it using Photoshop).

Harper does that, but without making the reader move on to a second panel. She achieves the effects through a tactile, craft-like element.

Like I said, the story's pretty funny (and sorry if I've spoiled some of the gags), and the art is as wonderfully cute and impeccably designed as so much of Harper's other works, and while I enjoyed those elements of The Power of Cute, the way it achieved the illusion of the passage of time within a narrative in a very graphic novel/comic like way, without using the traditional strategies of graphic novels/comics is what fascinated me about it.

Especially given its claim of being a graphic novel. The longer I think about it, the less sure I am that it's a picture book and not a graphic novel, if we redefined comics as the manipulation of time within a story told using pictures and words, if we define graphic novels/comics/sequential art by their ends, rather than by their means.

I don't know...I guess I'll leave it up to Scott McCloud to decide.
Posted by Caleb at 5:46 PM