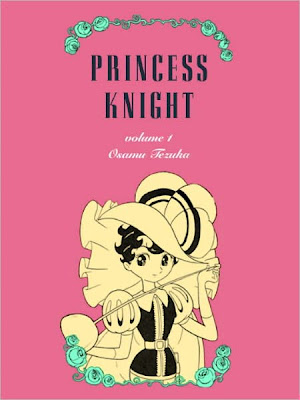 Once upon a time in Heaven, when the not-yet-born babies were being assigned their genders through the color of hearts they were being given, a mischievous cherub gives a child both a boy’s blue heart and a girl’s red heart.

She is born as Princess Sapphire, a girl, but she’s raised by her royal parents as Prince Sapphire, as only a male child could inherit the throne, and if the truth got out that she was pretty much a girl, the throne would go instead to the inept son of the wicked Duke Bushybrows.

That’s the premise of Osamu Tezuka’s epic fairytale adventure, which is being published in two beautiful volumes by Vertical.

As if hiding one’s true gender from the world upon reaching adulthood weren’t difficult enough, Bushybrows and his henchman suspect Sapphire’s secret and plot to out her. And she falls for the prince of a neighboring kingdom, who loves her when she’s dressed as a girl, and hates her when she’s dressed as a boy, and has no idea that her boy and girl personas are really the same person.

The plot is downright breathless, as almost every chapter finds a new complication and a new status quo for the princess, as she hides her identity, tries switching back and forth between identities, is outted and put in prison, escapes only to end up in another prison, escapes again, is captured by a witch, is transformed into a swan, is abducted by pirates and so on.

Familiar Tezuka elements are present, like drawn gags and cameos, and distracting jokes, as when a pirate says “This scene must have been really hard to draw!” during a scene of a naval battle in which combatants swarm onto one another’s ships.

It’s a pretty breathless, and beautifully drawn, adventure story, with lots of swordplay, chases and monsters, and I suppose there are academic papers and articles by smarter people than I to be written about what this text might say about gender and gender roles in mid-twentieth century Japan.

To a certain extent, Tezuka’s story adhered to stereotype, as Sapphire’s strength and facility with a sword is based on her having a boy’s heart—when she temporarily loses it, for example, or thinks womanly thoughts, her strength and skill evaporate.

But, on the other hand, it offers a rather enlightened view of a female character challenging and overcoming the constraints put on her by a male society, and seems to put forth the idea that while people can choose to live one way or another, deep down they were born one way, and they will only be happy when they’re allowed to live openly in that way.

I may be projecting—hell, I’m almost sure I am—but the narrative holds up such projections quite well.

I was also quite curious about the role of Christianity in the story, as God and his angels are treated not unlike Zeus or Olympians in Greek myth. Tink, the mischievous angel who gave Sapphire one heart too many, is condemned to Earth to live as a human until Sapphire’s situation can be straightened out, and he aids her against a demonic foe.

In once scene, he calls on God to help him fight the witch-turned-into-a-dragon, and God responds by sending lightning bolts and dropping a huge fist onto the beast. Later, he freezes time and appears to Tink as a star in the sky, not unlike the heavenly beings who appear as heavenly objects in It’s a Wonderful Life, and he offers a solution to Tink’s problem that would seemingly make Sapphire’s situation worse.

I’d highly recommend the first volume of Princess Knight, and am eagerly awaiting the second volume.
Posted by Caleb at 5:28 PM

Wow. What a paradox, now it IS more interesting.