Remind me to take the week of San Diego Comic-Con International off next year. I'm pretty sure no one is reading comics blogs this week...at least, not little personal ones like this, not when 99% of the comics community seems to be concentrated in one city at the moment, and a year's worth of comics news and hype is all being released at the same time.

Well, I'm in Ohio, so I'm gonna soldier on, even if I'm playing to an emptier than usual room.

So, how about Marvel's publishing plans for October, huh? The month their "Marvel NOW!" (remember to emphasize that last word if you're reading aloud) starts with the first of their somewhat rejiggered titles, and the final issues of a bunch of their series, which are going to be relaunched with new #1s over the course of the next few months.

As always, you can read the full solicits at Comic Book Resources and/or ComicsAlliance. 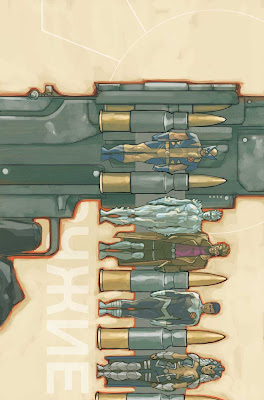 I didn't understand half the words in the solicitation text, but I like the cover for this month's issue of Astonishing X-men. Save for What's Her Face's costume, which I can't really make any sense of, mechanically-speaking.


AVENGERS ACADEMY #38
CHRISTOS GAGE (W)
TOM GRUMMETT (A)
Cover BY GIUSEPPE CAMUNCOLI
• Guest-starring the staff & students of WOLVERINE & THE X-MEN!
• Because you demanded it: the flag football game between Avengers Academy and the Jean Grey School!
32 PGS./Rated T …$2.99

I did not actually demand that. But now that you mention it... 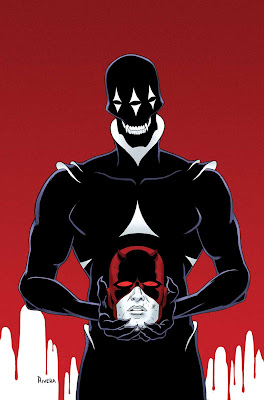 Well that guy on the cover of Daredevil sure is scary looking... 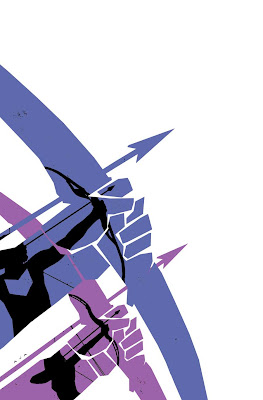 I like this David Aja cover for Hawkeye #3 as much as I despise John Tyler Christopher's cover for Dark Avengers #182 (so Marvel is renumbering many titles with new #1's, and just attaching ridiculously high numbers seemingly at random to other series...?), which I will not post, so as not to hurt your eyes. 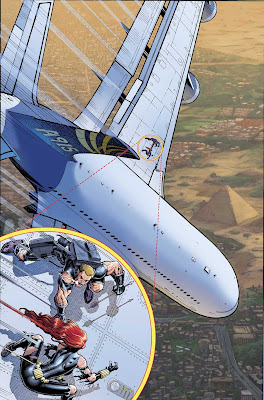 
Thanos: Son of Titan #1 (of 5)
Joe Keatinge (W) • Rich Elson (A)
Cover BY Ed McGuinness
Variant Cover by MARKO DJURDJEVIC
• Find out the story behind the biggest surprise cameo from the Avengers movie!
• Learn the brutal, violent secrets behind the galaxy’s greatest villain courtesy of Joe Keatinge (Glory). and Rich Elson!• It’s called the Marvel “Universe” for a reason.
32 PGS./Rated T+ …$2.99

What, Thanos is in the movie?! Geez, how about a spoiler warning, Solicitations Writer Guy!

Oh hey, you know who they shoulda got to do a miniseries on Thanos' origin? Thanos creator Jim Starlin. 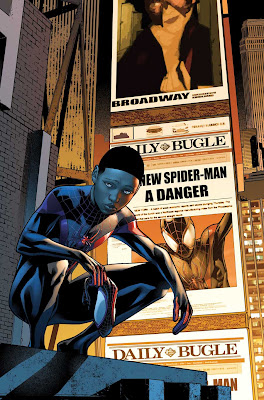 ULTIMATE COMICS SPIDER-MAN #16.1
BRIAN MICHAEL BENDIS (W) • DAVID MARQUEZ (A)
COVER BY SARA PICHELLI
• The Daily Bugle is on the hunt to find out everything they can about the new Spider-Man
• What they discover will surprise them, you…and him!
32 PGS./Rated T+ …$2.99

A special ".1", jumping-on point issue for an Utlimate book, part of a line that was designed as easily-accessible takes on the characters that would be free from all the direct market audience-tolerated static that some find so unappealing about comics, like relaunches, renumberings and big, inter-book crossovers?

Well yes, a "jumping-on point" for a book that's only been around a little over a year, featuring a character who has only existed that long probably doesn't need a jumping-on point at this point, but do note this special only costs $2.99; I guess the idea with this is it's an introductory price, and that Marvel's hoping new readers like it so much that they'll be willing to pay $4 a month to follow the continuing adventures of Ultimate Comics Spider-Man. 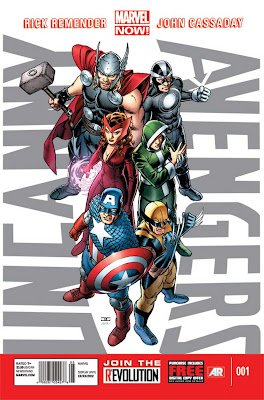 UNCANNY AVENGERS #1
RICK REMENDER (W) • JOHN CASSADAY (A&C)
Variant Covers by ADI GRANOV, DANIEL ACUNA, SKOTTIE YOUNG & TWO MORE TO BE ANNOUNCED!
Sketch Variant Cover by JOHN CASSADAY & TBA
Deadpool Call Me Maybe Variant by TBA
Uncanny & Avengers Variants also available
Blank Cover also available
ALL NEW ONGOING!
• THIS IS IT! The greatest era of the Marvel Universe starts here! From the ashes of AvX an all-new, all-different Avengers assemble!
• Captain America begins his quest to create a sanctioned Avengers unit comprised of Avengers and X-Men, humans and mutants working together – so why is Professor Xavier’s dream more at risk than ever?
• The first attack of the most loathsome villain in history will quake the Marvel Universe forever!
• The funeral of one of Marvel’s greatest heroes!
32 PGS./Rated T+ …$3.99

—I just can't see how John Cassaday draws a monthly comic book. Maybe if Brian Michael Bendis were writing it, and half the panels were just headshots of people with their mouths open, but I don't know.

—This strikes me as a sort of weird concept, given how long various X-People and mutants have been Avengers (Beat, Wolverine, Scarlet Witch, Quicksilver), but I suppose it makes sense coming out of Avengers Vs. X-Men.

—I hate the new Scarlet Witch costume, which is basically a red Black Widow costume with her forehead tiara.

—That's a pretty neat cover design though...I imagine that will pop off the racks pretty well.

—I'm interested in seeing that Skottie Young variant; I bet that looks very different than the fifteen other variants.
Posted by Caleb at 7:42 PM

One theory floating behind Uncanny Avengers is to move more mutants into the Avengers property, thereby giving Marvel an argument for using them in the Avengers movie franchise.

And yes, people are serious about that.