Review: The Flowers of Evil Vol. 1 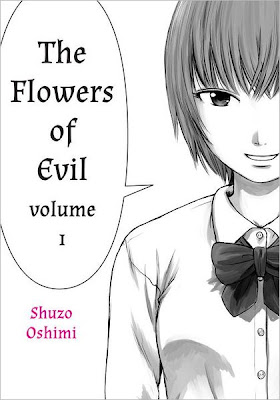 Baudelair'es book was quite controversial upon it's 1857 publication, and re-read today, in decadent old 2012, it still seems remarkably blunt in its discussion of sex and the female body, and boasts a sort of rebellious, teenager-trying-to-piss-of-the-parents interest in demonology. It's not hard to imagine it outraging or embarrassing readers in, say, the Greatest Generation's generation, so it's easy to see how it could scandalize the mid-19th century.

Oshimi explains in his author's notes that he read it in middle school—this series is heavily influenced by his own school experiences, apparently—and he "didn't understand much of it, but the book's feel, suspicious, indecent, yet nastily noble" made him think, "I'm so cool for reading it."

His protagonist is Takaso Kasuga, an average Japanese high-schooler separated from most of his classmates by his devastating crush on the sweet, pure and innocent Nanako Saeki, a long-haired beauty in his class. That, and his fascination with books, chief among them being Baudelaire's book, which Oshimi designs a neat cover for: 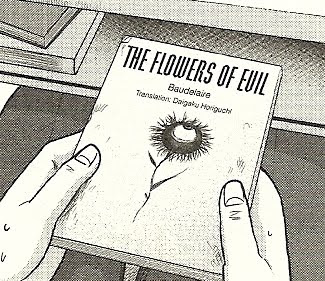 He based it on Odilon Redon's cover... ...but made it his own (and made it creepier), returning to that imagery repeatedly throughout the book at important points. 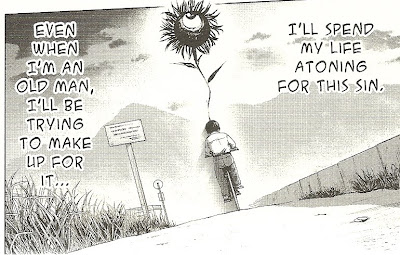 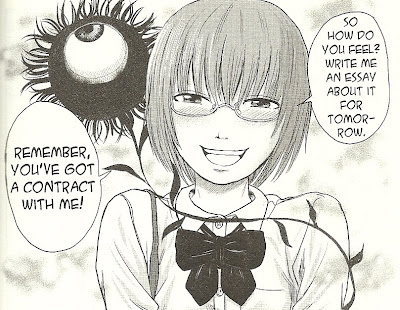 One day Kasuga is alone in the classroom after school and notices that Saeki forgot her gym bag. On a strange whim, one he struggles with for a panel, he takes her dirty gym clothes home with him.

Unfortunately for him, not only was the incident noticed, with the whole school abuzz over what kind of pervert might have stolen a school girls dirty gym clothes, but his act was witnessed by Nakamura, whom the back cover copy calls "the weirdest girl in class."

It may be because Nakamura seems insane, as well as evil. When we first meet her, her teacher scolds her, and she responds: 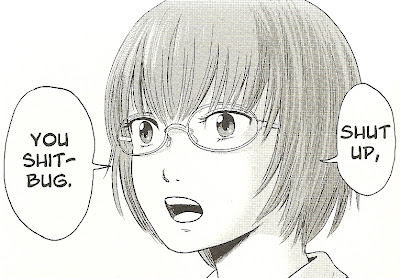 When the teacher raises his hand to slap her for calling him a "shitbug," she stops him with this look alone: 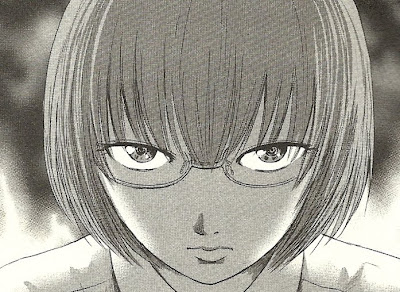 Soon Kasuga is under her thumb, and she blackmails him into forming "a contract" with her. Her goal is to take something precious from him, to strip him away and reveal to him that he's just a pervert at heart, that the whole world is full of perverts and "shitbugs" or something.

This includes threatening him, slapping him, stripping him naked and forcing him to wear Saeki's gym clothes and, at the climax, well, I don't want to spoil it, but suffice it to say that once Kasuga starts trying to be his self around Saeki, and takes an interest in her, she notices that he seems like a decent guy as well, and they plan a date, while Nakamura hovers in the background, able to destroy him at any moment with her knowledge of the one, weird, perverted thing he did, a prod she uses to get him to do more and more.

The tone of the book, I should note, is not a comic one, although it is often darkly funny, with Oshimi delivering what would be "jokes" in other manga with a straightforward sincerity that may or may not be deadpan. It's an uncomfortable funny, akin to the funny parts in, say, David Lynch movies—you laugh at how weird it is, but you're not entirely sure if you're supposed to be laughing, or if Lynch wants you to laugh at that point, or, if he does, what about it he wants you to laugh at, if that makes any sense. (I'm pretty sure a Japanese schoolboy with a framed picture of Baudelaire in his bedroom staring at it and saying, "Baudelaire....give me strength!" is supposed to be funny, though).

Now, comics, unlike poetry, has a component beyond the verbal, one that needs no translation to convey it's meaning. That is, you don't have to speak fluent Japanese to understand what Oshimi is trying to communicate about the way that Kasuga feels in this panel: 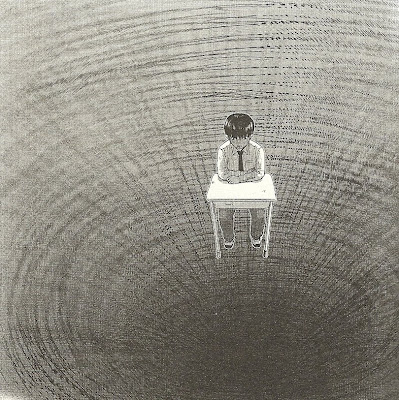 Still, I found myself wondering how much has been changed in the translation, and if the original was at all softened, or if that "softness," for a lack of a better word, comes from the naivete of the young characters just learning to become adults. For a book about perversion, a book whose central act involves the theft of a teenage girls gym clothes, the sexual content is remarkably tame.

For example, when Kasga opens the bag he remarks upon the smell, but somewhat unconvincingly adds "...of shampoo..."

During the hand-smelling scene, Nakamura coyly says, "My hand smells really good these days. Wanna sniff it?" He demurs, and later she grabs his right hand, smells it, then looks at him and says, "So, you've been using this hand to stroke and rub...Saeki's gym clothes all over yourself?

Perhaps the most explicit it gets is when Nakamura forces him into the stolen gym clothes—which happens so fast we don't see him naked—and proclaims:

Kasuga, listen. I've felt antsy for a while now. It feels so hazy inside of it down there that I could scream. I'd like this whole world to just turn into shitbugs in that haze

It's very funny, it's very weird, and it's remarkably suspenseful. I've already broken out my Lynch metaphor, so I really shouldn't return to it in the conclusion here, but Flowers of Evil shares that same tension between the normal, happy, everyday world and the darker world of lust and gratification that is at the center of so much of Lynch's best, most Lynchian work. I suspect Kasuga, like I suspect Oshimi already has, will come to the conclusion that those worlds are really one in the same, and everyone has a private pervert in them somewhere. I'm enjoying watching the unpredictable Nakamura threaten to out him as one though, and use the word "shitbug" over and over again, as I have no idea what it means and have never heard it. Shitburd, yes. But shitbug? And how does the haze of a vagina transform the people of the world into shitbugs? Perhaps Volume 2 will have the answers.

By the way, I really like the cover. Oshimi's name is in a hot pink, and, on the spine, where the picture of Nakamura continues, the title, volume number and Oshimi's credit are all in the same pink.

Nifty! Always nice to see m'sieu B. get his due. I free-associated a four-page comic on the subject of evil with Baudelaire's skull as the nexus for the Always Comics anthology a few years back. (I used John Zorn's take on Baudelaire as b/g while inking-- with mixed results. Zorn makes some screechy music.)

Your gloss of the plot reminds me of Sundome, which didn't flinch from the obvious subtext of its tsundere / n00b relationship. Considering the controversy surrounding Sundome-- which is exploitative titillation, neither ashamed of its subject nor particularly clever or nuanced in its execution --I'm not surprised 'Flowers of Evil' suffers from some obvious restraint in its translation.

Maybe she just made that up, because she wanted her own slandering word. Or maybe she refers to Dung beetles.