Sometimes evil is dumb, too.

One of my favorite lines in 1987's Spaceballs comes when Bill Pullman and Rick Moranis are having their climactic schwartz ring fight, and Moranis' Dark Helmet feints a handshake, only to steal his opponent's ring. He intones gravely: "So, Lone Star, now you see that evil will always triumph because good is dumb."

I was only 10 at the time, but it struck a chord with me. Most of the popular entertainment I was familiar with at that time dealt in rather broad terms with a good vs. evil narratives—G.I. Joe, Transformers and He-Man cartoons, Star Wars, C.S. Lewis' Narnia novels, The Hobbit—and if the good guys weren't necessarily dumber than the bad guys, they were generally a lot less cool. In fact, in many of those narratives, the chief good guys were generally the least interesting characters (Think Duke or Flint, Optimus Prime and He-Man/Prince Adam vs., like, everyone else on their teams and all of their opponents on the opposite teams).

I don't think Dark Helmet's proclamation was on the money, however, as he failed to triumph in his own movie, and good always won out in just about everything I watched or read up until that point in my life. Also, sometimes evil is even dumber than good.

Take Gargamel snatching defeat from the jaws of victory in this scene from the sixteenth volume of Papercutz's Smurfs collection, The Aerosmurf, for example:

I remember watching the cartoon as a child, but I don't have very many specific memories of my thoughts or feelings about it at the time, beyond remembering it was a Saturday morning cartoon I'd watch between ones I liked better.

But reading these stories as an adult, I've developed quite a bit of sympathy for Gargamel. Maybe it was simply because he's a human being, or that he's essentially a lonely, bald, poor, middle-aged cat lady of a man whose wicked acts are so transparently born of relatable frustration with his lot in the world, or that he's outnumbered something like 100-to-one in most of his conflicts, or simply how savagely the Smurfs occasionally beat him, but whatever—sometimes I kind of feel for the guy.

Like, in that above example, where Jokey Smurf is able to escape his grasp by offering him a present. How eager must Gargamel be for a gift, a gesture of kindness from another sentient being, that he convinced himself the Smurf in his clutches was actually going to present him with a present?

But then, there's another scene in this volume where he's in a dogfight with the Flying Smurf and has the upper-hand, only to fall for it again: 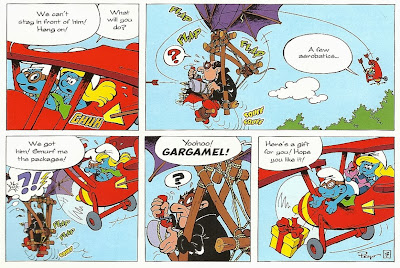 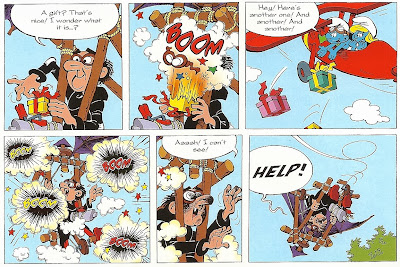 And, when he gets to the heart of Smurf village and is on a rampage, he's foiled once more by the offer of a gift in mid-battle: 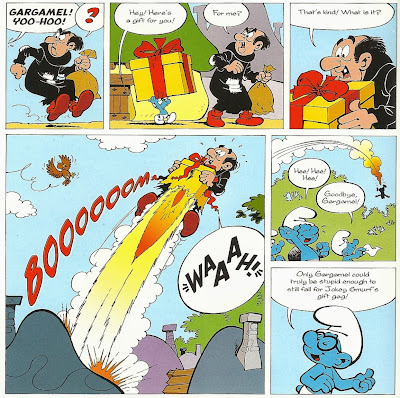 Three times! In the same volume! (Which contains six stories, so, in 50% of these stories, Gargamel is defeated by the offer of a gift that turns out to be a lie).

It's kinda hard to feel sorry for the guy after all that. As a wise man once said, "There's an old saying in Tennessee—I know it's in Texas, probably in Tennessee—that says, fool me once, shame on...shame on you. [Long, uncomfortable pause] Fool me--you can't get fooled again."
Posted by Caleb at 7:58 PM