It wasn't my intention to leave my allegedly daily blog fallow for most of Labor Day weekend, but I had such a hard time getting though one of the books below, and I had a bunch of particularly great books sitting there in my review pile needing reading in a more timely fashion, that it's taken me forever to finish that one comic. I'm still not there, but I'm going to go ahead and post this post now, as the next new comic book day is rapidly approaching.

Adventures of Superman #4 (DC Comics) Soon DC Comics will be publishing about a half-dozen Super-comics within their main, DCU, "New 52" line of comics—Superman, Action Comics, Supergirl, Superboy, Batman/Superman and Superman/Wonder Woman—and yet the best Superman comic is probably this one, the digital-first anthology series that takes a variation of the old Batman: Legends of the Dark Knight approach to the character: Short, continuity-lite stories from rotating creative teams, most often featuring high-skilled "name" creators.

This issue features three short stories behind a Bruce Timm-drawn cover, featuring his version of Superman (best known from Superman: The Animated Series striking the classic Superman pose (one the new, new 52 costume makes if not impossible, than at least redundant).

The first is a day in the life story starring Lex Luthor, appropriately if lazily entitled "A Day in the Life." It's written by the Dan Abnett and Andy Lanning writing team, and features superb artwork by penciller Wes Craig and inker Craig Yeung. There isn't any bad art in this issue, but I found this to be by far the best, and perhaps among the best art in the series so far. The characters and figures are all highly expressive, from Lex's fully-stocked arsenal of sneers and self-satisfied smirks to Superman's various action poses. The panel lay-outs are masterfully economical, and there are no black borders, the colored images set directly onto the white of the page, so arranged so that the bright white gutters form the panels. (The coloring, by Lee Loughridge, is similarly perfect; there are shades and tones to it, but not an overwhelming amount, so the flat, essential "comic book-ishness" of the art remains unmolested).

All in all, it's a very, very strong character sketch of Lex Luthor, one that defines him, his archenemy and their relationship quite well in a very short space.

That's followed by "The Deniers," written by Tom DeFalco and drawn by Pete Woods in a more exaggerated, comedy style by Pete Woods (With Alex Antone rather aggressively over-coloring it). The story is that of two plumbers having lunch in a diner; the first of whom not only doesn't believe in climate change because this past winter was cold (dude needs to read the chapter on climate change in Daryl Cunningham's How To Fake Moon Landing) before moving on to explain how there's no such thing as Superman, and it's all "one big conspiracy" involving the media and the government.

He believes there is a guy running around in a superhero suit, but the fact that he's never actually seen him, or any of his super-feats, during his years in Metropolis leads him to believe that all the superpowered businesses is just hype. DeFalco throws in a couple of very near misses into the story, with Superman almost being tossed into the diner they're eating in and, at the conclusion, Clark Kent literally bumping into the denier as he and his Planet pals walk in for lunch.

These stories almost always feature the "real" Superman costume—I'd have to flip through the back issues to be sure, but I don't think there's been a single instance of "New 52" Superman in any of them—but Woods gives Superman an even older, more classic costume, with lace-up boots, a red S over a black shield with a yellow border.

The final story is "Savior" by writer Rob Williams and artist Chris Weston, and this is yet another day in the life story, this one featuring Superman. It's narrated by Ma Kent, expressing her worries and concerns about the safety of her now grown son and the fact that she misses him, and wishes she didn't have to share him with the world so he would have time to visit and stay for supper sometime.

In rapid succession, we get several panels recounting his origin story, see him battle a Brainiac (the one with the tentacled skull ship) in an clever, amusing fashion, stop by the Kent farm to perform a chore, go to work at the Planet, save Lois Lane, defeat a giant robot created by Lex, visit Krypto at The Fortress of Solitude and, in a neat little three-panel sequence, see a series of crazy adventures suggested: 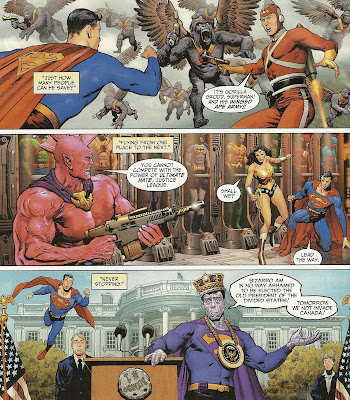 I know I've mentioned this before, but one of the things that I liked about the previous status quo of Superman, when both Ma and Pa Kent were alive, was that it made him rather unique among superheroes, who are usually orphans or, in the case of the few who still have living parents, tend to have troubled relationships with them. Grown-up Superman/Clark Kent had a nice, healthy, normal relationship with his aging parents, and that was one of several things that distinguished him from his many peers.

It has, of course, been changed in The New 52: As in his original, Golden Age incarnation, the kindly family who raised him has passed away before his career as Superman really even begins. 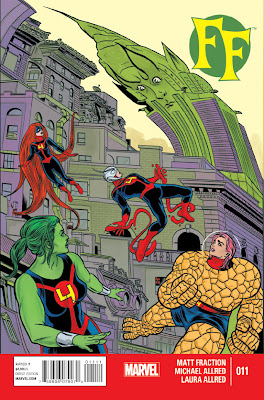 FF #11 (Marvel Entertainment) The cover gives away this issue's guest-star, who interrupts the substitute Fantastic Four's attempts to seek out the real Fantastic Four in a time-craft of their own, only to end up in an eerie version of New York City where everything is purple and green ("It looks like your closet threw up on a planet," Darla tells She-Hulk). The cover does not spoil why Impossible Man wanted to see these guys though, and the change in the cast that results.

Meanwhile, back at the Foundation, Julius Caesar teaches his three-step program to Conquering 101: 1.) Coming, 2.) Seeing, 3.) Conquering. And some of the kids who were scheming in the last issue continue to scheme.

So, you know, business as usual, featuring the incomparable art of Mike Allred, as brilliantly colored by Laura Allred.

Rocket Raccoon: Tales From Half-World #1 (Marvel) This is the book that gave me so much difficulty.

I grew quite curious about the character when I first met him in the 2007 Keith Giffen-written, Timothy Green-drawn Annihilation: Conquest—Starlord miniseries, which featured a team that served as the basis of the Dan Abnett and Andy Lanning-written Guardians of the Galaxy ongoing, which in turn served as the basis of the more recently relaunched Guardians series written by Brian Michael Bendis (Cynical reading? Bendis got to take over the franchise once it was announced Marvel's next big super-team movie would use those characters and go by that title, while Giffen, Abnett and Lanning essentially got the shaft).

Marvel has previously published at least one graphic novel collection including a bunch—maybe all—of their previous Rocket Raccoon solo comics, but it was expensive and pretty far down my "Buy In Trade, Someday" list. Then I saw this on the shelf, a comic book-format (i.e. something you could read on the beach or in the bath) collection of the Rocket Raccoon comics I was most interested in anyway: The ones drawn by a young Mike Mignola, who had yet to develop his signature style, and, in fact, had only taken the first tentative steps in that direction.

Compare, for example, two covers featuring Rocket Raccoon and drawn by Mignola, one from the mid-80s, the other from the 21st century: 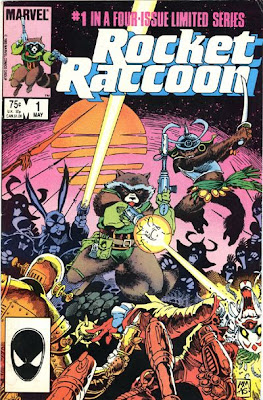 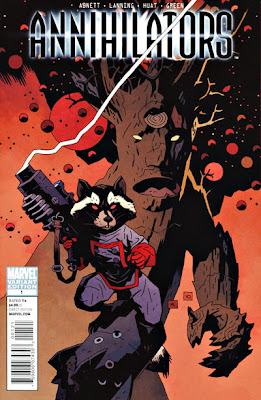 This book collects the four-issue, 1985 Rocket Raccoon miniseries written by Bill Mantlo, penciled by Mike Mignola and inked by Al Gordon and Al Milgrom, plus more modern covers, like the one seen on the collection cover, and five dense pages of Handbook page giving Rocket's history in exhausting detail.

I'm not entirely sure how greatly this will appeal to fans of the current iteration of the character, whose hook is that he's a funny animal (or, really, an anthropomorphic animal) in a straight, superhero/space opera narrative. That juxtaposition/clash isn't to be seen in this comic, where Rocket is a sort of Buck Rogers character in a funny animal world, with some pointed, goofy, Steve Gerber-style commentary weaved in.

I'm still only half-way through, but the story thus far revolves around Rocket and his pals who live on a planet dedicated to protecting and entertaining "The Loonies," humans who have an elaborate religion based on earth's mental health practices. Not all of the animals are good, and Rocket finds himself embroiled in a war between two evil, rival toymakers: A snake and a mole. Both want to kidnap, marry and murder Rocket's girlfriend, a Mink (or was she an otter?), whose uncle is a Walrus.

It's a bit of a slog, to be perfectly honest.


Young Avengers #9 (Marvel) The art remains perfect, the dialogue is crisp and smart and funny, the teen angst is potent and well-telegraphed, with out being bludgeoningly obvious. This is a good comic. That said, this particular story, which "feels" like it should be the conclusion of a story arc, leaves our heroes exactly where they left off, without accomplishing any of their goals, and with minor changes to the heroes (Hulkling makes a move he's been considering, Lady Hawkguy is maybe growing up too fast to be part of this team, Marvel Boy has a beard). This was the sort of issue that makes me think maybe I should be reading this comic in trade rather than in singles, but I read so few singles as it is, and I really, really like this comic.
Posted by Caleb at 9:43 AM

I look forward to your review of the Mantlo/Mignola-mini in the near future.

It`s good that you ARE buying Young Avengers, though. After all, you never know when a comic that isn`t the main Spider-man book will be axed...

Then again, YA IS an Avengers-book.