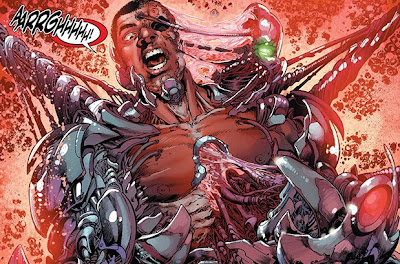 This week DC's six-part, Justice Leagues crossover story concluded, and—well, "concluded" is maybe too strong a word, bringing with it certain expectations. I guess it would be more accurate to say that DC published the final part of the story labeled "Trinity War" this week, and it will continue in next week's Forever Evil #1, by the same writer and a not-terribly-reliable artist who hasn't had anything at all to do with "Trinity War".

I wrote about it for ComicsAlliance, and you can read the final installment of "Trinity War Correspondence" here. It's a tough comic to talk about without spoiling things, since this final chapter is pretty much nothing but "things" that are meant to be surprises, and would spoil with foreknowledge.

I may return to it at some point here at EDILW to give the story a more formal review, but, in general, it was Geoff Johns at his Geoff Johnsiest (which oughta tell you if it's something you'll love or hate, really), and while Johns' affection for remixing old stories and DC's turning the next phase into a theme month (and the attendant PR) sorta spoiled some of the big surprises (or at least made them awfully easy to see coming), I should note that while the major villain was exactly who he seemed to be and the story ended as it seemed like it most obviously would, I was still pleasantly surprised by the climax's connection to the title (as in, "Huh, I didn't see that coming").

If you've got the patience and money to drop on well-made big, dumb super-comics (these comics were a wretched.value at $4 a pop for a series of splash pages stitched together with exposition scenes containing verbiage to rival that of Bendis, particularly this last chapter), this was overall awfully adequate. All three art teams were solid, the writing was consistent between the various, Johns-lead writers, and as much as I'm looking forward to seeing what happens next, I reeeaaaalllly wish it was one of these art teams rather than David Finch who will be drawing what comes next (Especially after I spent some time this week reading some of his recent work in Batman: The Dark Knight Vols. 1-2). 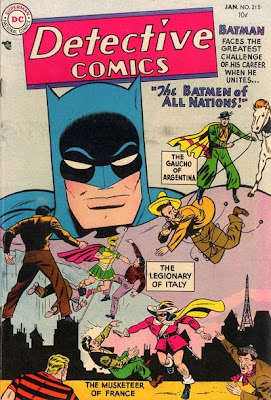 Speaking of Geoff Johns and Robot 6, my contribution to the blog this week was a reading of the Grant Morrison-free Batman Incorporated Special #1 and how it compares to DC's send-off of Geoff Johns' Green Lantern.

I doubt it was entirely intentional, but the contents of that comic served a pretty perfect acknowledgment of what made Morrison's run on the character so special. I know Batman Inc is ending, but I sure as hell wouldn't mind occasional check-ins with these guys in a Club of Heroes annual or quarterly, preferably one drawn by and maybe written by Chris Burnham, whose Batman of Japan story is the over-all strongest (And preferably one that lets Cassandra Cain be The Black Bat again!). 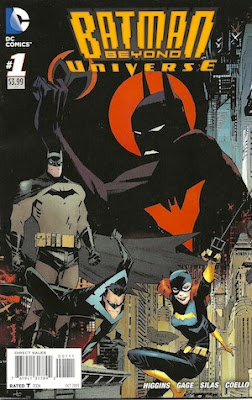 And speaking of Batman, I wrote one other piece published elsewhere this week: A review of Batman Beyond Universe #1 at Good Comics For Kids. I never watched more than a handful of episodes of Batman Beyond (I liked the new costume, and Ace's inclusion), and hardly read any of the comics (maybe one from the original run featuring The Justice League of that era...?), but this struck me as really rather alright.

I especially enjoyed the back-up/back half featuring a Superman and Justice League story. This League now features the pre-New 52 version of Superman (only older; I hate his costume, but no more than I hate New 52perman's costume), Captain Marvel (who is still called Captain Marvel and still dresses like Captain Marvel), Barda and her husband Mister Miracle (I guess they don't age due to being gods of a sort...?). A lot of the other characters—Aquagirl, The Flash, Micron—also have pretty strong, sleek costume designs that made this maybe my favorite Justice League, and, thanks to "Trinity War," I spent the last few months reading all of DC's Justice League comics.
Posted by Caleb at 7:46 PM