Stupid local comic shop with their stupid 20% off all trades sale... 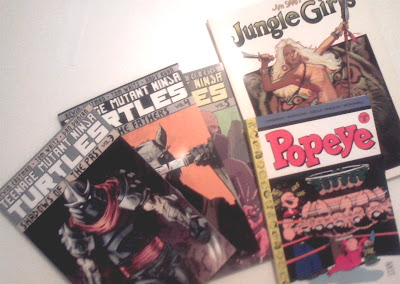 So I stopped by my local comic shop yesterday between errands in the neighborhood, intent on picking up the four new comics waiting for me in my file from the last Wednesday or so, and it turns out they're having a 20% off all books and trades sale! They practically put a gun to my head and forced me to pull out my credit card and buy an armful of trades because seriously, when's the next time I'm going to be able to buy so many books for so little money? That even beats the usual discount I get when I buy books from a certain online retailer!

So I'm getting all caught up on IDW's Teenage Mutant Ninja Turtles ongoing (or mostly caught up, anyway; I have no idea where the two trades of "micro-series" and The Secret History of The Foot Clan fit in; those guys really need to publish a reading order/checklist for their many, hydra-like franchise lines of comics and collections), reading the third and, I think, final collection of the excellent Roger Langridge-written new Popeye series (And hey, check out that cover—That's Dave Sim!) and I finally broke down and bought Jim Silke's Jungle Girls, which appears to be—stay with me now—a book full of illustrations of jungle girls, by Jim Silke (Plus a bunch of words and photographs, which I think are about the girls he draws and paints or whatever; I haven't gotten that far yet).

Anyway, there goes a significant portion of my Sunday and Monday, including the time I would have spent preparing a post for Every Day Is Like Wednesday tonight.

Surprised 20% off motivates you this much. I pre-order almost everything for 40-50% off from online vendors, so that wouldn't excite me. Still, I'm glad you found things you like on sale!

You can still get the 40% discount (sometimes more) from instocktrades.com.