Just as night follows day, my reviews of Marvel's solicitations inevitably follows my reviews of DC's solicitations. For the whole shebang, check out Comic Book Resources. For just the parts of the shebang that jumped out to me as particularly interesting for one reason or another, read on... 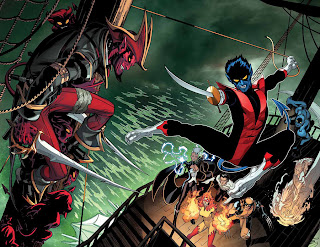 AMAZING X-MEN #1
JASON AARON (W) • ED MCGUINNESS (A/C)
...
An AMAZING new era for the X-Men starts here! Ever since his Nightcrawler’s death in X-MEN MESSIAH COMPLEX, the X-Men have been without their heart and soul. After learning that their friend may not be gone after all, it’s up to WOLVERINE, STORM, BEAST, ICEMAN, NORTHSTAR and FIRESTAR to find and bring back the fan favorite fuzzy blue elf! Super star artist ED MCGUINNESS (HULK) joins master X-Writer JASON AARON (WOLVERINE AND THE X-MEN, X-MEN: SCHISM) to bring you the most exciting comic on the stands!
32 PGS./Rated T+ …$3.99

Yes, this is exactly the comic the world need more than any other right now—a new X-Men comic. Huzzah! Why, it's been months since the last new X-Men comic, X-Men, launched!

That is a pretty great creative team though, but I've gotta ask—What's Firestar doing hanging out with these guys? Is she a mutant? Or is she just there to lend some credence to Marvel assigning the book the "Amazing" adjective, as with her and Iceman both on the team, they have both of Spider-Man's Amazing Friends in the cast? And if if that is the case, why not just call the book Nightcrawler and his Amazing Friends, The X-Men...? 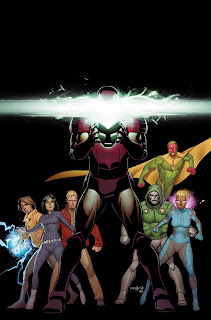 AVENGERS A.I. #6
SAM HUMPHRIES (W) • VALERIO SCHITI (A)
Cover by DAVE MARQUEZ
THE MAN BEHIND THE IRON (MAN) MASK REVEALED! (Definitely more than meets the eye…)
With the Vision’s teammates in turmoil, what’s a telegenic techno-being to do? Why, make the morning show rounds of course!
And S.H.I.E.L.D. Agent Monica Chang does it. Yes…IT. We can’t believe it either.
32 PGS./Rated T+ …$2.99

Man, with a solicit like that, there damn well better be a sex scene in this issue... 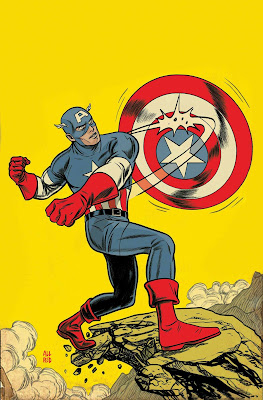 The more Mike Allred art at Marvel, the better, as far as I'm concerned. This is a variant cover for Captain America: Living Legend, by Andy Diggle and Agustin Alessio (not Mike Allred, whose contribution is one swell cover). 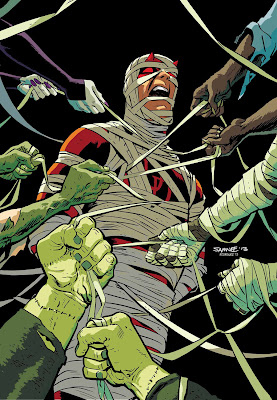 DAREDEVIL #33
MARK WAID (W) • CHRIS SAMNEE (A/C)
“Monsters Stink!”
Daredevil finds himself wrapped up in an adventure that will send his life spiraling out of control as we head into next year’s 50th Anniversary…and the end of everything Matt Murdock holds dear!
32 PGS./Rated T …$2.99

If you add a mummy, a werewolf, a Frankenstein's monster or a Dracula to any comic book, you automatically improve it's awesomeness. And Waid and Samnee's Daredevil was already pretty awesome.

I'm really surprised mummies haven't had their turn in the spotlight yet, at least not in the same way that zombies and even vampires have. Instead of launching a new volume of Mighty Avengers, Marvel should really be releasing Mummy Avengers, a series about how the original Avengers line-up were stuck back in ancient Egypt and when they died they were mummified and then, thousands of years later, they were resurrected to...Aw, forget it. No one cares about my Mummy Avengers pitch... 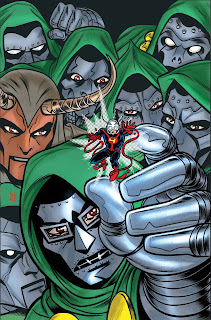 FF #14
Matt Fraction & Michael Allred & Lee Allred (W)
MIKE ALLRED (A/C)
It’s the eve of the Future Foundation’s war with Latveria and the FF are readying for battle!
But so is Doom the Immortal Conqueror -- and the Council of Dooms!
What’s happening in Old John Storm’s head? I mean, what’s UP with that guy, anyway?
32 PGS./Rated T …$2.99 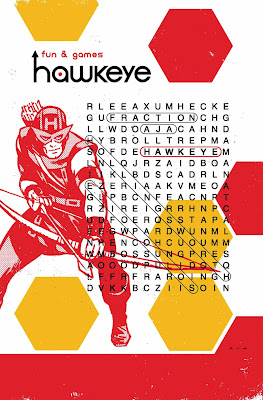 Oh Hawkeye, you never disappoint, do you...? 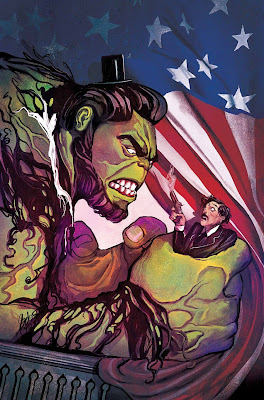 Wwwwwait, why would Marvel even to bother more than one cover if one of those is either a Hulked-out Lincoln (Or the Hulk, disguised as Lincoln, smashing puny John Wilkes Booth? 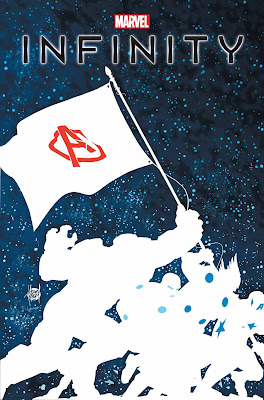 Adam Kubert does the old superheroes-raising-the-flag-Iwo Jima-style for his cover to Infinity #6. The Hulk, Thor, Iron Man, Captain America...I thought those guys were all super-strong? Why can't one of 'em lift that flag all by themselves...? 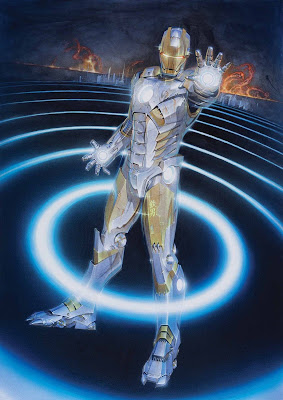 IRON MAN #18
KIERON GILLEN (W) • JOE BENNET (A) • COVER PAUL RIVOCHE
...
AN ALL NEW ARC BEGINS! “IRON METROPOLITAN” PART ONE!
TONY STARK has returned from space with a vision of a better world.
Who is his secret ally? What is his secret resource? Who on Earth would stop him?
The MANDARIN is dead. He died at the end of Fraction’s run. There’s probably a reason why we’re mentioning it.
32 PGS./Rated T+ …$3.99

Is Iron Man a Spaceknight now? That's kinda cool, but Tony, Spaceknight just doesn't have quite the same ring to it as Rom, Spaceknight, does it...? 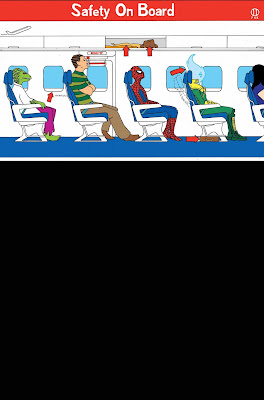 Well, I like the looks of Marco Rudy's cover for he and Matt Kindt's Marvel Knights: Spider-Man #2. I suppose all that black space will be filled in with the title and credits before the book ships. 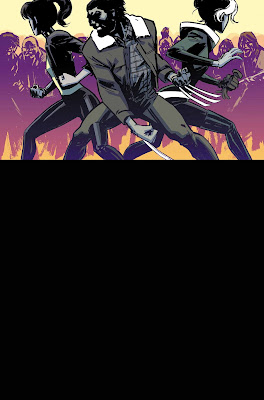 
SAVAGE WOLVERINE #12
Phil Jimenez (w) Phil Jimenez (A/C)
Inked Variant COVER by Phil Jimenez
An all new arc by superstar Phil Jimenez! (NEW X-MEN, AMAZING SPIDER-MAN, Wonder Woman)
On an annual safari in the African veldt, Wolverine encounters a killer that will take him halfway across the world.
Wolverine returns to Madripoor to deal with some family business.
32 PGS./Parental Advisory …$3.99

Anthology titles with rotating creative teams should always be $2.99! Like, I would really like to read a Wolverine comic by Phil Jimenez, but there's no way I'm paying $4/22 pages for it! And I probably won't buy the trade, either, if it's collected with material by other creators I'm not interested in reading work from. So the only way I'm going to read this now is a way in which Marvel gets no money from me—borrowing whatever trade collects it from the library some day.


WOLVERINE # 11
PAUL CORNELL (W) • ALAN DAVIS (A/C)
X-Men 50th Anniversary Variant by TBA
With the world on the brink of viral apocalypse, Logan and Kitty Pryde face down the Thirteen Ninjas of Sabretooth’s Hand!
And that’s not all – enter Lord Deathstrike and the Silver Samurai!
It all comes to a head with one final moment that will change the face of Wolverine – forever!
32 PGS./Parental Advisory …$3.99

Change the face of Wolverine forever, huh? He's going to grow a mustache, isn't he? 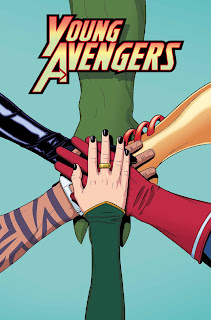 YOUNG AVENGERS #12
KIERON GILLEN (W)
JAMIE MCKELVIE (A/C)
The Young Avengers versus “The Young Avengers”. The stakes? What have you got?
Loki’s scheme reaches its final twist. Expect the team’s jaws to just hit the floor and lie there, twitching for the rest of the comic.
A tempting offer for Noh-Varr may get an arrow through his head. Other romance based drama too, as kissing is the new planetary extinction event.
32 PGS./Rated T+ …$2.99

Yes, Firestar is a mutant.

"Angelica Jones manifested her mutant microwave energy powers at the age of thirteen..."

Having about 122 000 X-men series wouldn`t be a bad thing, if they`d utilize more less used characters in them.

Don't tease: I would read the hell out of Nightcrawler and his Amazing Friends...

Huh. I really thought Nightcrawler was going to stay dead.

Wow, I thought raising the price 33% overnight just because they knew people would pay more for the same amount was kind shady, but they raised the price 33% and THEN reduced the page count too? That's...wow.