This week at Robot 6 I reviewed two original graphic novels, neither of which are really "novels" and both of which deal rather broadly with the rather broad topic of science. 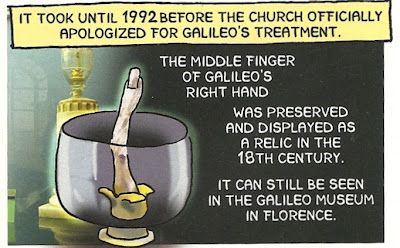 The first of these is Margreet de Heer's Science: A Discovery in Comics, which is sort of like the entire 500's section of your local public library, ultra-condensed into a book of colorful cartoons (It reminded me quite a bit of Action Philosophers, particularly in tone and most particularly in the longer strips devoted to important scientist figures, but I haven't really read anything exactly like it...although de Heer has done two other books on similarly broad subjects, so I suppose those might be a lot like it).

Above is one of my favorite panels, the last from a strip on Galileo. I don't know if the point was to illustrate the mummified finger of Galileo eternally giving everyone the finger or not, but that's how I took it. That's probably the gesture I'd go out with, were I him. That book should be widely available next month.

The other book was released a few months back, I believe, and that is Darryl Cunningham's excellent How To Fake a Moon Landing: Exposing The Myths of Science Denial. That one is a pretty amazing-looking, easy-to-read book, and I was a little surprised by how much I enjoyed it, with even the chapter on subjects I found much less interesting (homeopathy, chriopractic) than others (climate change, fracking) proving to be just as compelling in Cunningham's hands.

And hey, look! There's an accidental cameo from Bizarro World! 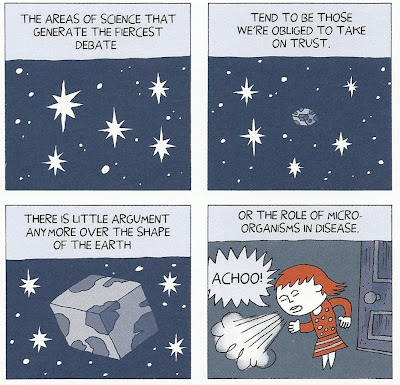 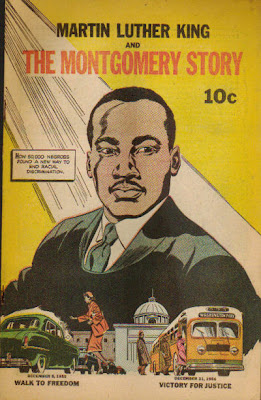 For Las Vegas Weekly I reviewed March: Book One, a little book about the Civil Rights movement by sitting congressman John Lewis (a first), his staffer and co-writer Andrew Aydin and Nate Powell, whose work is as superb as always (I actually forgot how great Powell was until I started reading this thing). Oh, and there's a blurb from President Bill Clinton, which may also be a first—wait, wait, I think President George W. Bush was blurbed on the back of an Ultimates hardcover. Dumb jokes aside (Please note: I had an even dumber joke I didn't use), you can read my brief review of March here.

Personally, I was really struck by the inclusion of that MLK comic book in the narrative—a comic that was briefly in the news during the first, more hopeful uprising in Egypt for the role it played—given the form of the narrative, and how graphic novels are the comic books of today. It's just a neat historical parallel or echo, I think. 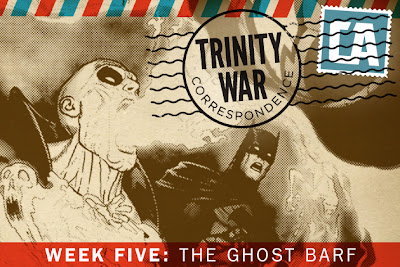 This week I also wrote the fifth—and second-to-last!—installment of "Trinity War Correspondence" for ComicsAlliance. Artist Mikel Janin drew perhaps my favorite single image of the entire series so far in Justice League Dark #23.

A few quick things about the series so far that I haven't gotten into in those pieces, as they are more focused on recapping than criticizing (Although there's not a whole lot to criticize; it reads like a big Geoff Johns JSA or Green Lantern arc—that particular brand of big, fun, awesome/idiotic that Johns has so perfected, and all the things that irritate me about the story are mostly incidental ones, like Captain Marvel being Shazam, wearing a hood and being an insufferable brat, Dr. Psycho not looking like the awesome H.G. Peter version, Black Orchid wearing a suit of armor made out of red cabbage, Amanda Waller being skinny, and like that).

First, the artwork has been pretty close to superb, the weakest bits being maybe some of the Doug Mahnke pages inked by whichever of his six inkers doesn't ink him as well as the other five. This is notable because the main series has three different pencilers, and, I don't know, seven or eight inkers. DC generally has a pretty hard time finding artists who work good, work fast and whose work meshes well, but they're doing much better than average on this series, if you ask me (And I was kinda surprised, as I really, really disliked the art in Justice League Dark in the first issue, which I believe was also Janin; I disliked it so much that I dropped the book after trying out just that first issue). The tie-in art has been much less strong, but I don't know how much that will ultimately matter; I can't imagine they will ALL be collected together, although the Constantine tie-in was important enough to get recapped at the beginning of this fifth chapter.

Second, I really, really, really like the logo for the series. The three pillars, one standing straight, the other two leaning in each direction, kinda sorta forming a "W" for "War," but also suggesting the three hash marks of counting the members of a trinity. The books and the tie-ins really jumped off the shelf to me, visually, and I even liked the way they're labeled, with the main series getting chapter numbers, and the tie-ins labeled "tie-ins."

Third, there's been a whole lot of trinities in this book—three Justice Leagues, three temporary "new" Justice Leagues assembled from the ranks of those three as goals slightly shifted, three League leaders (Superman, Batman, Wonderwoman) three members of the "Trinity of Sin" (Pandora, Phantom Stranger and The Question) and three eyes in the skull-shaped box. There's been considerably less war, though; I think we've had maybe three actual fights, only two of which were between League factions, and they were more in-line with, say, fist fights or, in the last case, a bar brawl or bench-clearing sports team fight than, you know, a "war" of any kind. But then I suppose "Trinity Conflict" doesn't sound quite as dramatic, does it...?

Finally, this thing is crazy expensive. This week's chapter, Justice League Dark #23, for example, was $4 for 23 pages (and nicer coverstock, which seems to be mainly how they're justifying no longer holding the line at $2.99), with five of those 23-pages devoted to full-page splashes. The cheaper Pandora tie-in ($3 for 20-pages, regular cover stock) was a particularly quick read, thanks in part to all of it's splashes and lack of incident (like, five things happen in those 20-pages, but the construction of this issue might have been somewhat forced into treading water, as it was set during a particular chapter of "Trinity War," and couldn't move past it and risk giving away the ending).

Looking over the checklist, there are six official chapters at $4 a pop ($24 bucks), a prelude and four tie-ins at $3 a pop ($15), for a grand total of $39. Maybe that doesn't seem like a whole lot for a crossover story, but, as this progressed, it's become clear this entire event is really just a prelude event for Forever Evil.

In conclusion, trade paperbacks and libraries are awesome.

But enough about me.

Here are two links to pieces at Robot 6 I particularly enjoyed.

First, Tom Bondurant's column, which looks like it took an awful lot of research to come up with a pretty good guesstimate of the editorial structure of DC Comics as of right now. It's kinda fascinating how many people are involved with editing DC Comics at the moment, particularly when there are so many incidents where it looks like no one is in charge (of which Bondurant brings up a few). Editing, like, coloring and lettering, are elements of super-comics making one tends not to notice at all unless they are really, really bad or really, really great and, in the case of editing, sometimes it takes years and years to even notice the impact an editor might have had.

Bondurant puts the current map of who does what maybe into historical perspective, mentioning important and influential editors that have left their mark on characters, franchises and the medium in general. I certainly noticed when Denny O'Neil left the Batman books. And I think I realize now why the Jeph Loeb books I thought were the best of the many he's written in his long career were edited by Archie Goodwin. And why Mark Millar's writing got worse and worse when he left DC for Marvel, got so popular at Marvel there was no point in saying no to him and got worse still when he started doing his own creator-owned stuff.

Anyway, give Bondurant's piece a perusal. It's weird to think that I don't really feel or notice any editorial presence at DC Comics right now on any of the books, beyond a vague feeling that no one's really in control of anything, and that it is bad, but in a face-less, name-less sort of way; like, all of the many aggrieved artists and writers who have left the company recently, or continue to work for the company but have grumbled about it here and there, just talk about "editors" or "editorial," not particular ones.

Finally, here's a rejected proposal from Bobby Timony for a pretty sweet looking, all-ages Wonder Twins comic, another candidate for DC's Rejected Proposals Cavalcade comic, or the book on the subject of rejected comics proposals that I really think someone should write (as discussed in this previous links post).
Posted by Caleb at 10:56 PM

If you write a book on Rejected comic book proposals, I will be the first to buy it.

I accidentally ran into this on the Internet today: http://www.comicbookresources.com/?page=article&id=24160

Top Cow's Broken Trinity: Pandora's box event mini-series from 2010. I'm not accusing DC of theft, just pointing out how the current crop of superhero creators keep drawing from the same well, leading to a very unified take on the genre.

I've always felt that Bob Schreck's presence as editor was the reason that Green Arrow was so strong during the early 2000s. That's easily the best work I've ever seen from Kevin Smith, Brad Meltzer, or Judd Winick. I don't think that's a coincidence.