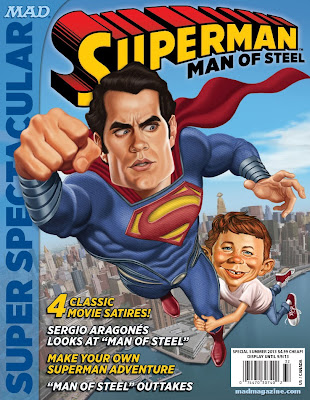 I read and reviewed the Mad Super Spectacular: Superman, Man of Steel for Good Comics For Kids (you can read it here, if you like), and I was rather surprised by some of the contents (none more than the bull semen joke in the Superman Returns parody, really, but that's only because it was a joke about bull semen in a place I did not expect to find a joke about bull semen).

The book contains the Mad parodies of each of the Superman movies save for Superman IV, plus one for Smallville. The great Mort Drucker drew all of them (except for the Superman Returns one), and I was rather surprised at how many gay jokes were in them.

I can't necessarily say I was offended by them, and I don't think they necessarily should have been edited out of the book, or that DC shouldn't have collected those comics because of the presence of those jokes in them, or that people shouldn't ever make gay jokes. Personally, I don't think any subject should ever be off-limits to a comedian of any kind (including cartoonists, obviously), but the thing is, if you're going to embrace potentially offensive, controversial subject matter, then you have to be funny enough to justify doing it (Comedy is one place where I think the ends usually do justify the means).

And I certainly don't think one shouldn't be able to make jokes about Superman being kinda gay. He was a character who, in the 1940s through early 1980s or so, clumsily, half-heartedly courted a woman he didn't really like, let alone love, while keeping a deep, dark secret from everyone but his very best friend (who had the very same secret).

And Superman would literally enter a literal closet, and then come out of the closet as his more flamboyant, true self. 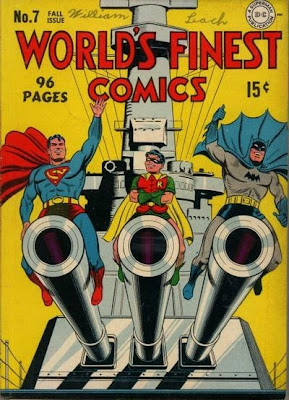 None of these "Superman is gay" jokes really qualify as funny, though, and thus don't really justify their existence. (Humor's subjective though, I suppose, and maybe some of you will find them funnier than I). They all seem really...odd in 2013. Like, these are subjects we don't really hear or tell jokes about much anymore, at least not in such a broad, clumsy, gayness-is-in-and-of-itself-inherently-funny kind of way.

Perhaps they made more sense at the time (I'm assuming and hoping that one about Arabs was referencing something specific and thus wasn't just the wild, offensive stereotype it looks like now, for example). I was technically around at the time of all of these, being born in 1977, but I wasn't conscious of much outside of my immediate surroundings. "My" Superman was the one on Superfriends and the Super Powers Saturday morning cartoon and toy line, and I didn't really watch any of the Chistopher Reeves movies until I saw bits and pieces on cable as a teenager and, later, on VHS and/or DVD as a grown-up.

So maybe this was okay, or at least common, in the late seventies or early eighties, but, man, it sure looks weird and wrong and off-putting in 2013: 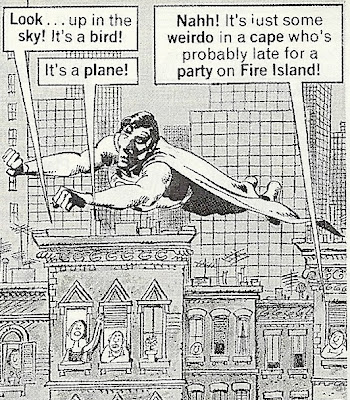 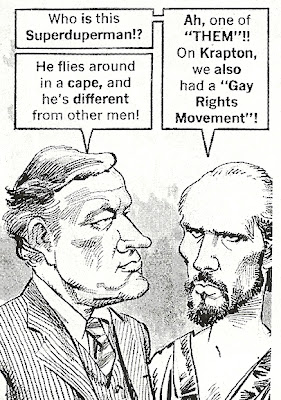 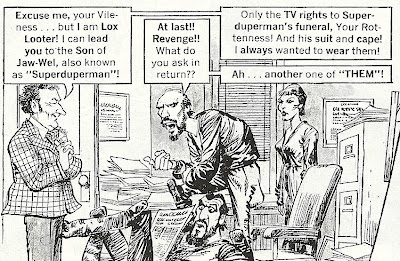 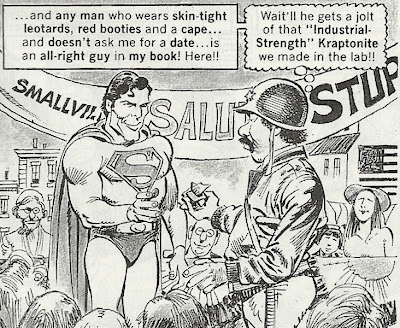 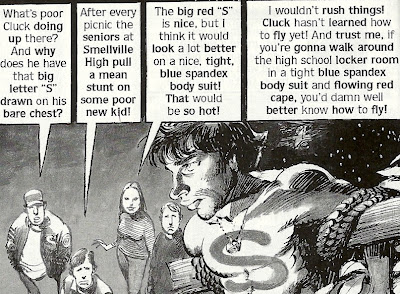 
Here's the weird Arab joke from the Siegel-written "Superduperman": 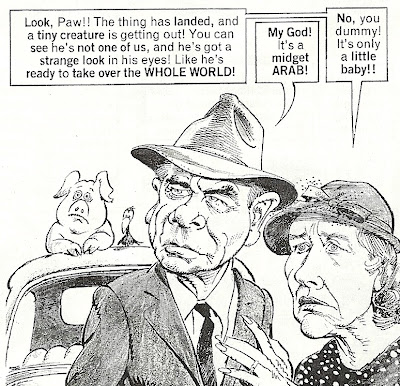 Finally, so as not to go out on a down note, here's a joke from the "Superduperman II" strip that is funny in a very different way, given the similarity of Man of Steel's plot and conflict to Superman...