Some not-terribly-organized thoughts on Batman and Robin Vol. 2: Pearl 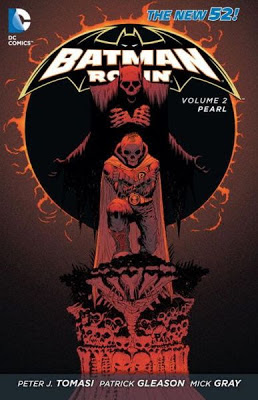 —Yes, according to the cover and the fine print, this second collection of the New 52 iteration of writer Peter Tomasi and (nominal) artist Patrick Gleason's Batman and Robin series is just called Pearl rather than The Pearl or even A Pearl Sounds weird to me, too.

—I was really struck by how good the first volume of this new series, Born to Kill, turned out to be; it was one of the better of the New 52 books I had sampled, and seemed to fin in perfectly well with what was going on—in terms of plotting and overall quality—in the main, Batman A-books, Grant Morrison and Chris Burnham's Batman Inc and Scott Snyder and Greg Capullo's Batman.

I was therefore rather surprised with how relatively poor the quality of this second volume, which collects the next six issues of the series, plus September 2012's #0 issue. It was still mostly competent, mostly professional work, but the scripting lacked the tight thematic and plotting focus of the previous volume, and the by-committee art was rushed, slap-dash and poorly blended.

When I closed the back cover, I was having a hard time recalling the last time I had seen such a severe drop in quality between two volumes of the same book by the same creative team (although the art end of the creative team expanded quite a bit in this second volume).

—The most obvious change between the first and second volumes was, of course, in the art teams. Pencil artist Patrick Gleason manage to draw all eight of the issues collected in Born To Kill (with just two inkers involved, a feat perhaps accomplished because the Tomasi/Gleason team was announced to be taking over the title before the reboot was announced and, after a single story arc, disappeared for a bit while fill-in teams finished out the rest of the pre-New 52 run of the book, perhaps giving Gleason a lot of lead time to get art in the can).

This volume has three times as many artists involved: There are nine art credits. Four of them are pencil artists, with styles as diverse as that of Gleason, Andy Clarke and a Tomas Giorello, and there are a full five inkers, including Tom Nguyen and Mick Gray, who worked on the first volume, plus several others.

That's an awful lot of artists involved to draw just 140 pages over the course of seven months, and the book's editor didn't do a very good job of deploying them strategically or even finding artists who draw very similarly, or are willing or able to ape Gleason and Nguyen convincingly. The art styles just shift radically from page to page—not even scene to scene—like poorly edited sweatshop work.

—The other obvious difference between this volume and the first is that there are a lot of tie-ins to other Batman stories and other goings-on in the DC Universe, some as subtle to call-backs and references to events in Batman Inc (Damian being "grounded" from Robin-ing while there's a huge bounty on his head, for example), others official-type tie-ins where the issue serves as a non-essential chapter to a big, Snyder-inspired crossover with the flagship Batman title.

—So, for example, the book opens with the #0 issue (which was actually published fifth of the seven books collected here), the issue that came out during last year's "Zero Month," when each New 52 title presented a specially-labeled issue revealing the origin (or, in Batman's case, some aspect of the origin) of the lead character or characters. Tomasi and company give us Damian Wayne's origin, which is something Grant Morrison already covered about as clearly and thoroughly as it needed to be covered already, back when he first introduced Damian, but Tomasi at least finds a new angle for it, presents a lot of new information, and Gleason provides some fairly incredible images of giant Man-Bat monster men.

And these rather striking images, of course: 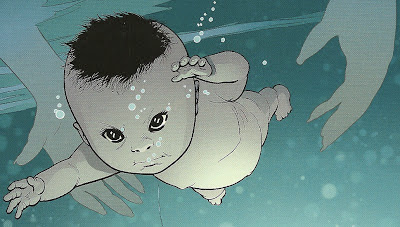 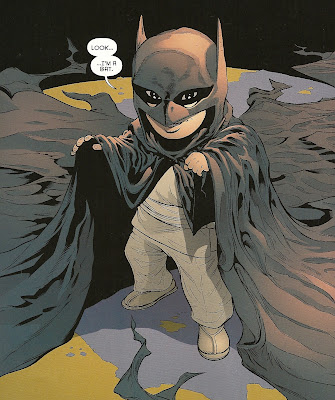 Curiously, Tomasi introduces the concept that once a year, on his birthday, Damian and his mother Talia would engage in a rather brutal sparring match and, if Damian won, she promised to reveal the identity of his father to her. We see six such birthday battles on-panel, and before the first, Damian's old enough to be talking, so much be either a very advanced four-year-old or an extremely advanced three-year-old. While he does gestate in some sort of sci-fi exterior womb thing, there's no mention of any kind of hyper-aging or anything, and even if there were, he ages naturally for six years, and Talia wouldn't have gotten any DNA from Batman until at least a few years into his career. The story, then, seems to pretty directly contradict DC's New 52 five-year-time line (plus maybe a few extra years for Batman).

I just can't figure out how this Batman hasn't been Batman for at least a good 14 or 15 years if he has a ten-year-old son.

—There's another single issue that ties into the "Night of the Owls" portion of Snyder's Batman run, in which The Court of Owls apparently activates their undead assassins—The Talons—and sends them after prominent Gotham citizens, with only Batman and his small army of 28 sidekicks to try and save the day.

In this one, Damian must save a general from a Talon, and does so. It's basically a context-less fight, with a weird portion near the end where the Talon gives a two-page, eight panel monologue to his intended victim about how he must kill him in order to remove any obstacles to a Revolutionary War Era land deal...? I'm still catching up on Snyder's Batman, but from the first volume (Batman Vol. 1: The Court of Owls), I got the impression that they had a much more sinister master plan that had nothing to do with real estate contracts.

—The last two issues of the collection tie-in to Snyder's Joker-centric "Death of The Family" story arc in Batman, but rather obliquely. After finally getting back to the business the first volume concerned itself with—Batman trying to be a good father to his son as well as a good mentor hero to his sidekick—the title characters run afoul of a mysterious plot involving cannibalism and behavior-modifying drugs, which ends up being the work of The Joker (The next issue, Batman and Robin #15, would be the first of the series labeled as a "Death of The Family" tie-in; this is more of a prelude to a tie-in, I guess).

—That then leaves just three issues of this collection not tying in to a a Batman story arc of DC promotional event. It's entitled "Terminus," and the villain conflict is that a character facing some sort of terminal illness he keeps at bay with super-science has recruited a bunch of not-very-interesting villains who have somehow had their bodies hideously altered by an encounter with Batman (Bootface, for example, was firing a blowtorch at Batman when the Dark Knight kicked him in the face, resulting with a permanent impression of Batman's sole on his face, and so on).

His master plan is to fire a WMD missile of some sort that will cover all of Gotham with some sort of ill-defined biological weapon. There were several evocations big and small to the Christopher Nolan's Dark Knight movies, from Batman firing the pointy-bits of his gauntlets, to buildings exploding and leaving flaming bat-symbols in them to Batman trying to direct a doomsday weapon out over the water instead of the city (curiously, the bomb goes off in the water—which should wreak absolute havoc with Gotham City, irreparably poisoning a huge portion of its harbor and doing God knows what to the Atlantic Ocean, right...?)

Oddly enough, it also reminded me a bit of Batman: The Brave and The Bold, as when Batman slides underneath the Batmobile and emerges on the other side, wearing a big robot battle-suit.

—The interesting part of this story arc isn't the villains or the threat, but the psychodrama involving Damian. He calls a meeting of the former Robins—Dick "Nightwing" Grayson, Jason "Red Hood" Todd and Tim "Red Robin" Drake—and announces that at some point in the future, he's going to attack each of them, kick their asses and take something of value from each of them as a trophy.

—Seeing all four characters in the same images at the same time really reinforced my belief that Nightwing should still be wearing blue, not red.

I understand why they put him in red, as he's a former Robin and that's a Robin color (and I imagine the reason George Perez originally put Nightwing in so much blue was because he had grown out of Robin and into a more Batman-like character, and blue was Batman's color back then), although the red, abstract bird shape calls to mind Chris O'Donnell's Robin costume from the Joel Schumacher Batman films, which is something that probably shouldn't ever be called to mind.

The main reason I think Nightwing should have kept his blue on black costume, however, is simply because there is so goddam much red and black between these characters now: 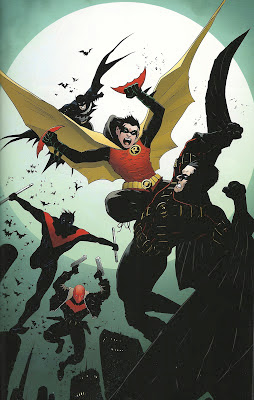 (The cover for Batman and Robin #10, sans the lettering and logos) 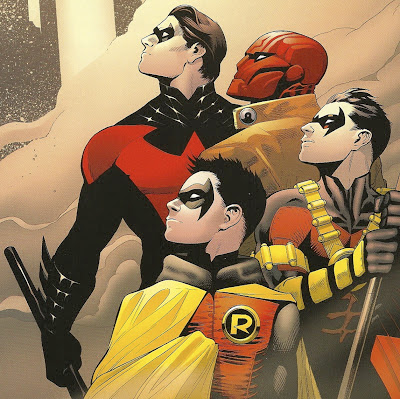 —Tie-ins to "Night of the Owls" and "Death of the Family" and participation in Zero Month and talk of the goings-on in Batman Inc aren't the only references to other titles seen in this volume, however. There's also quite a bit of discussion of some plot from Teen Titans, which was probably the saddest and most unfortunate part of the entire volume, as it forced poor Patrick Gleason (and or whichever of the other eight artists involved with this volume) to have to draw that hideous Red Robin costume for several pages, and it forced poor Tomasi to have to use the name "Fist Point" repeatedly. Apparently, there is a bad guy in the pages of the New 52 Teen Titans named Fist Point, which is an even dumber name than Nightfist, a character Garth Ennis and John McCrea created in the '90s to make fun of stupid '90s characters (Joke character Nightfist boasts a character design some 10,000 times better than that of serious character Fist Point, too).
Posted by Caleb at 10:50 PM

I didn't even know that guy's name was Fist Point. I just thought of him as "Triclops looking dude who kills Artemis four pages after she's introduced, and then the Titans act like she was a longtime team member for the rest of the story arc."

Did they really waste a Tim vs. Damian issue arguing over a character that was only in the comic for half an issue?