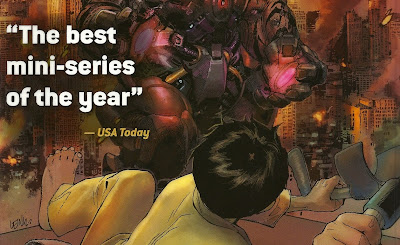 "Well, it looks like someone who writes for USA Today only read one miniseries that year," I thought to myself when I saw this blurb on the back cover of the trade paperback collection of Superior...and that was before I read it, and realized just how creative bankrupt and just how derivative of the Superman character and story the book really was. In essence, it's an elevator pitch for a high concept Superman Elseworlds story—"What if Superman were real?" with a pair of M. Night Shyamalanian twists thrown in (I wrote about Superior this week at Robot 6, if you'd like to read my take on it; given Man of Steel being in theaters now and the sequel to Kick-Ass, which is being produced by the dude who made the first Kick-Ass and has the movie rights to Superior, I thought it a good occasion to take a look at Millar's latest movie pitch-as-comic book series).

Anyway, after I read the book I was even more curious about that "best of the year" blurb on the back, and wondered if maybe Marvel hadn't unscrupulously edited something in a USA Today article to arrive at it; like, perhaps it was an interview with Millar, who said "I guarantee you: Not only is this the best mini-series I've ever written, but it's going to be the best mini-series of the year" or something Millar-esque like that.

The writer had this to say of Superior, which won his "Best miniseries" category:


Mark Millar is a master of off-kilter superhero comics—Wanted, Nemesis, Kick-Ass—and, with artist Leinil Yu, mines the theme of wish fulfillment in the story of a boy with multiple sclerosis who gets the chance to be his favorite do-gooder. The rub: The alien monkey giving him the powers is a demon, and the kid has to sell his soul to the devil to keep his new abilities. Everybody wants to be a hero, but Millar deftly explores the consequences of that gift

The only part I actually agree with in that paragraph is the plot-summary, and the last sentence is really hard to swallow. The price of being a hero? For protagonist Simon, it means either selling your soul to Satan to be a literal superhero, or not selling your soul to Satan in order to magically be Superman but instead remain yourself to be a figurative hero. For narrator Madeline Knox, it means potentially sacrificing a potential Pulitzer Prize for not taking advantage of a 12-year-old kid in a state of shock.

The only real hero who pays any kind of price is Simon's best friend Chris, who endures getting made fun of by some school bullies for hanging out with Simon.

Off the top of my head, I can't think of any non-Flashpoint miniseries that came out in the calendar year 2011, so I'm not ready to offer a 60-title deep list of miniseries that were much, much better than Superior by being, you know, any good at all. I think it's worth noting that of the 35 categories the USA Today writer offers, all of 'em go to direct market superhero comics, or genre comics involving super-powers and/or super-science and/or supernatural elements, even the ones that say "non-superhero" in the category.

For example, the non-Marvel, non-DC super-stuff includes Image's Strange Tale of Luthor Strode (its writer, Justin Jordan, was named "Best new writer"), Gladstone's School For World Conquerers ("Best book you may not be reading") and Chew (artist Rob Guillory was the "best non-superhero artist"), IDW's Locke & Key ("Best ongoing series") and Dark Horse's Mignola-verse business (The fictional B.P.R.D. got "Best team, non-superhero category"). To use a media-to-media comparison as Tom Spurgeon often does when writers discussing "comics" focus entirely on a single genre, this would be a bit like a writer covering television for a national newspaper coming up with 35 categories and choosing to award 30 or so of them to network police procedurals, with the remainder going to shows that are about private investigators.

Then again, the headline was "From 'Flashpoint' to 'Fear Itself,' the year in comics 2011" (In other words, "From DC Comics' major, line-wide event comic book series to Marvel Entertainment's major, line-wide event comic book series, the year in comics 2011"), and he named Flashpoint—Batman: Knight of Vengeance #2 the best single issue of the year (that's the comic in which it was revealed that in an alternate reality where Bruce Wayne was shot instead of his parents, his dad became Batman instead and his mom became The Joker for some reason).

So given that pool of comics, I guess What If...Superman dressed slightly different and we called him "Superior" so as to not get sued by DC? might seem like one of the more daring comics concepts of the year, and certainly Yu's a pretty great artist compared to about half the scrubs who turned out a bunch of really shitty-looking Flashpoint art (To be fair, the Batman Flashpoint had some pretty great art in it, despite the silliness of the storyline).

Anyway, I was just amazed to see that something that I regarded as one of the worst miniseries I've ever read being singled out as the best of a particular calendar year by a writer with such a widely-read (if not exactly prestigious or reliable for astute criticism) venue.

It takes all kinds, I guess; even jerks like me.

Aside from writing about Superior, which I promise I'm almost done going on-and-on about (maybe one more short post and then I'll be done, I swear), I also wrote about the second official installment of DC's "Trinity War" crossover story for the second second official installment of my ComicsAlliance series "Trinity War Correspondence." Go read it, please (Or just click on the link; page-views are the coin of the realm).

And since we're talking about weekly contributions to Robot 6 and "Trinity War," you should totally check out Tom Bondurant's column on the first few installments, as it is better, more knowledgeable and more even-handed than, like, everything I write.
Posted by Caleb at 9:06 PM