It's been a while since I've seen a re-run of the Batman live-action TV show—it was before I'd hit puberty, at the latest—so I don't remember the contents of that Batman's Batcave all that well, but I'm pretty sure the Batspresso machine is new.

Man, I could really go for a Batspresso right about now, I think, depending on how much it differs from espresso...

Anyway, the above image is, of course, a panel from Jeff Parker and Jonathan Case's Batman '66 #1 (the paper version), which I reviewed for Good Comics For Kids earlier this week. In addition to being a pretty fun comic, I think it's especially noteworthy as being another kid-friendly, all-ages DC comic featuring the publisher's most popular hero (which brings the grand total up to two with Li'l Gotham; maybe more if you wanna count the Beyond stuff, but I don't, because that's just some punk kid without a cape, not the real Batman), and for its unequivocal embrace of a show that used to hang like an albatross around too many in comics for too long. Anyway, you can read my piece here. 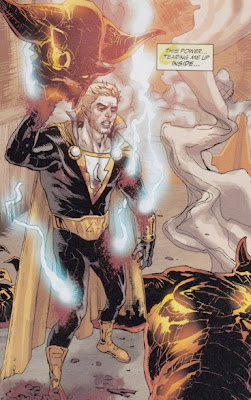 That there is John Constantine, temporarily imbued with the powers of Shazam, holding aloft the head of a demon he had just torn off with his bare, super-powered hands, taken from the pages of the Ray Fawkes-written, surprisingly-nice-looking Renato Guedes-drawn Constantine #5, a tie-in to DC's kinda awesome, kinda dumb "Trinity War," which I'm still covering for ComicsAlliance. You can read that here. 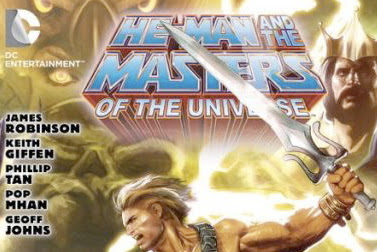 Finally read the first part of DC's reboot of the the He-Man and Masters of the Universe franchise—collected in He-Man and the Masters of the Universe Vol. 1—which is breathtakingly, mind-bogglingly bad comics, with art on part with that of Countdown and an extremely confused script no doubt hurt by the original writer leaving after just one issue. See all those credits up there? Those are just the writers and pencil artists; it leaves out the eight—eight!—inkers. You can read that piece here.
Posted by Caleb at 7:07 PM