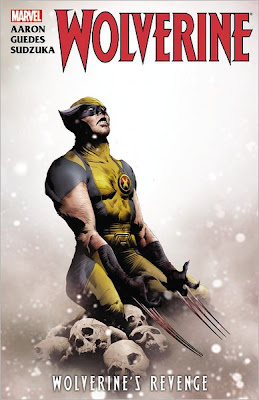 As far as story mechanics go, writer Jason Aaron rather beggars belief with the planning he attributes to the antagonists of this collection, The Red Right Hand. This is the same group that sent Wolverine's soul to hell and filled his body with demons that then set about trying to kill off all of Wolvie's loved ones in the previous two volumes (Wolverine Goes To Hell and Wolverines Vs. The X-Men), but as bad as that fate might seem, it wasn't even the Red Right Hand's endgame. Apparently they—or at least their leader—knew Wolverine would escape from hell and reclaim his body, which is why they've engineered this particularly insidious revenge against the character. The whole literally sending him to literal hell was just the means to the end of getting him good and pissed off enough to come at them.

The title is somewhat subversive, then. While Wolverine is hunting these people and is hunting them down seeking his righteous vengeance, they are busy enacting their real plan, and his revenge fizzles, as they get theirs during what should be our hero's moment of triumph. 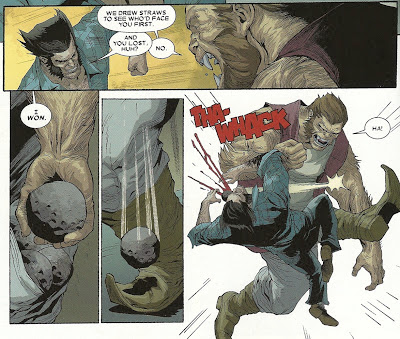 The structure is fairly repetetive, with each of the first five issues collected here (drawn by pencil artist Renato Guedes and inker Jose Wilson Magalhaes) featuring Wolverine entering a room to battle a member of the weird-ass group The Mongerels to the death (Like Cannonfoot, the gorilla-looking guy who kicks rocks super-hard at his opponents using special, rock-throwing shoes), while a member of the Red Right Hand flashbacks to their experiences with Wolverine, and which of their loved ones he killed (The group isn't really one of supervillains so much as ordinary civilian types who have a reason to want revenge against Wolverine, who killed one or more of their loved ones—sometimes because they were bad guys, sometimes because he was mind-controlled or whatever).

When Wolvie's killed the last of the Mongerels and entered the room where all the members of the Red Right Hand await him, he gets a triple-whammy of emotional assaults, one rather prosaic one that barely effects him, another that frustrates him in a coitus interruptus kinda way, if we view Wolverine stabbing people with his fist-knives as a form of coitus for the character and another particularly tragic and Shakespearean (or at least Greek tragic) existential gut-punch to the invincible hero's psyche.

Props to Aaron, then. I had a hard time suspending my disbelief regarding the whole counting on Wolverine to beat up the devil himself in hell aspect of the plan, but the final stages are truly creatively evil and, to some degree, unexpected.

It sends Wolverine on a sort of self-destructive spiral during the last two issues collected herein, which Goran Sudzuka illustrates, in a flatter, sparser but ultimately more emotive and comic book-y style than that of Guedes.

Wolvie completes a few tasks of repentance, completely withdraws from girlfriend Melita and the two superhero teams he runs with, and resorts to two extremely unusual coping methods. The first is unusual for him, at leas to my limited Wolverine knowledge: He keeps climbing a mountain and then jumping off the top of it: His healing factor won't let him actually die in this manner, but his brain dies for a few moments each time, giving him complete, death-like peace. And then he starts over.

The second method is only unusual for people who aren't Wolverine: He grows a beard, takes off all his clothes and runs with a wolf pack for a while, until some evil-ass humans remind him he can do some good in the world, and Melita manages to hunt him down...after interviewing all of Wolvie's peers in the superhero community (This last chapter of the trade nicely echoes the ".1" issue in the previous collection, in which Melita tries to throw a surprise party for Wolverine, and invites all the X-Men and Avengers). 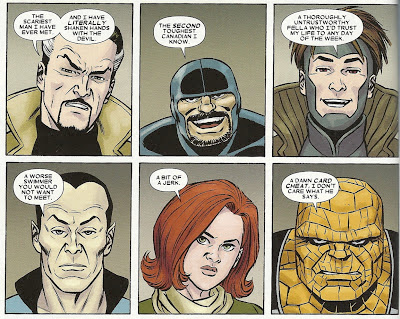 (As usual, Namor knows the truest measure of a man)

Best of all, this gives Sudzuka the opportunity to draw a large chunk of the Marvel Universe, and given his skills, that's certainly a welcome opportunity to see him taking advantage of.

Curiously, this story really reads like an end not only to this cycle of stories (Goes To Hell, Vs. The X-Men and Wolverine's Revenge), but like Aaron's final words on the character. The series would keep going for several more story arcs, though, including the previously reviewed Goodbye, China Town and Back In Japan.

Jae Lee provided the cover images for all of the issues that are contained in this collection, and while they are generally nice cover illustrations with a high degree of theatricality, I was quite amused by the cover of Wolverine #15, which seems to indicate that Lee has never in his life seen a picture of a wolf, but was just going by second-hand descriptions from people who have seen wolves: 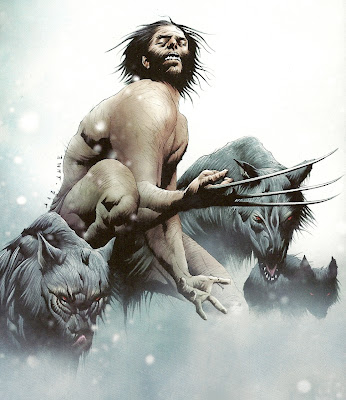 I should read Aarons run as the writer of Wolvie, when I get the chance.

If the Red Right Hand are able to inflict more torment on Wolverine than Hell itself, there's something kinda wrong about the way Hell is depicted in fiction, isn't there? If Hell is just a villain's lair, what's the big deal?