Let's get right to it, as it's Thursday night, about a week since these were originally released for public consumption, and everyone interested in comic books who isn't in San Diego right now is probably eyeballs deep in comics news anyway... 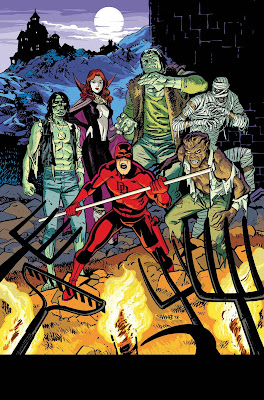 Thor Battle Variant Cover Also Available? Who would want a Thor battle variant cover when the regular cover has all of Marvel's Universal monster analogues on it?

Ooh, unless the Thor Battle variant cover has Thor battling Daredevil and all those monsters on this cover...? 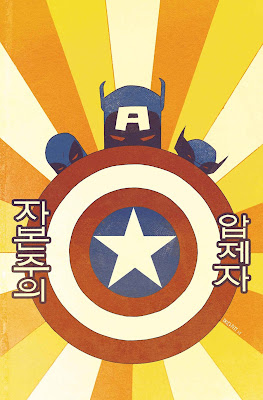 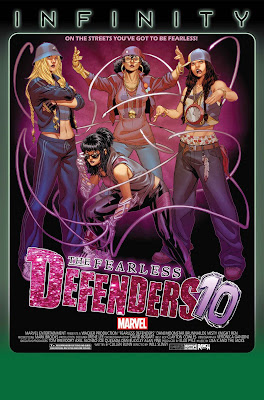 Well, that's two more issues than I expected it to last, anyway. 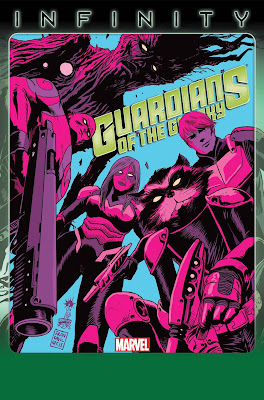 GUARDIANS OF THE GALAXY #8
BRIAN MICHAEL BENDIS (W) • FRANCESCO FRANCAVILLA (A/C)
...
INFINITY TIE-IN
• What will it take for Peter Quill to betray the entire Marvel Universe?
• And if you don’t know Eisner award winning artist Francesco Francavilla yet, you will after this comic!
32 PGS./Rated T …$3.99 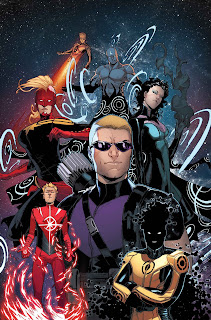 "Begins"...? In the fifth issue of a six-issue series? Man, that's gonna be a pretty short war. What have they been doing the last four issues, if not fighting...? It has Hickman's name in front of the W, afterall, not Bendis'...

Collecting all the first issues of a bunch of comics from a certain time period strikes me as a pretty cool idea (Although, hey, some of those numbers aren't 1s!), even though I'm not really interested in this particular book. 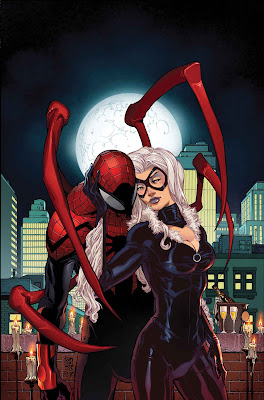 SUPERIOR SPIDER-MAN #20
DAN SLOTT (W) • GIUSEPPE CAMUNCOLI (A/C)
VARIANT COVER BY Milo Manara
• From the fallout of NECESSARY EVIL, comes new beginnings and new twists that will be felt in the pages of Spider-Man for years to come! SUPERIOR SPIDER-MAN #20 is where it all starts! Do NOT miss this one!
• It’s the first ever adventure for the Superior Spider-Man and the Black Cat. Felicia Hardy always cared for the Spider more than the man. But what happens when that man is Otto Octavius?
• Plus: A day Otto has been waiting for is finally here. Is the world ready for “Dr. Peter Parker”... and what he plans to do next?
32 PGS./Rated T …$3.99

I didn't think of it until seeing that cover image, but it really makes sense that if Doc Ock was in Spidey's body these days, he would augment it with four-more mechanical limbs. Nice to see he built four of 'em too, instead of three, as Tony Stark built for Spider-Man during the pre-Civil War (antebellum?) period in which Spidey was wearing the maroon and gold "Iron Spidey" suit, with its three spider-legs, giving him seven limbs total.

I know there was a whole story arc during Matt Fraction's Invincible Iron Man run about whether Doctor Otto "Doctor Octopus" Octavius was smarter than Tony "Iron Man" Stark or not, but based on their ability to count the number of limbs on a spider, I'd say Doc Ock's got the bigger brain. 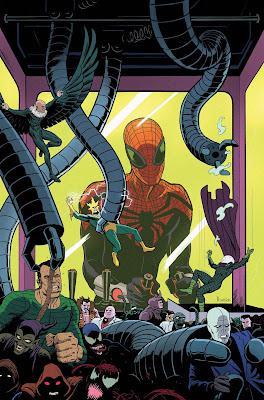 That's an awful lot of Thor collections being released in October. What, is there some sort of movie or something coming out...?


THUNDERBOLTS #16 & 17
CHARLES SOULE (W)
JEFTE PALO (A)
Cover by JULIAN TOTINO
TEDESCO
INFINITY TIE-INS!
• The ’Bolts’ “Perfect Plan” is going off the rails in Thanos’ wake!
• One of the Black Order sets her sights on the Red Leader!
32 PGS. (EACH)/Parental Advisory …$2.99 (EACH)

To be honest, I'm a little surprised they haven't retitled this book The Avengerbolts yet (Similarly, that Fearless Defenders isn't Fearless Avenders yet).

Woah, woah, woah—the twenty-eighth issue of this series is the end of the first chapter?! Not content with being the king of decompression, Bendis is apparently making a bid to become the god of decompression.
Posted by Caleb at 8:01 PM